A HUGE Chinese rocket is making an uncontrolled re-entry back to earth and could land on a major city, experts have a warned.

The 21 ton Long March 5b is returning to earth after launching the first module of China’s new space station and could land on a large area that includes New York or Madrid. 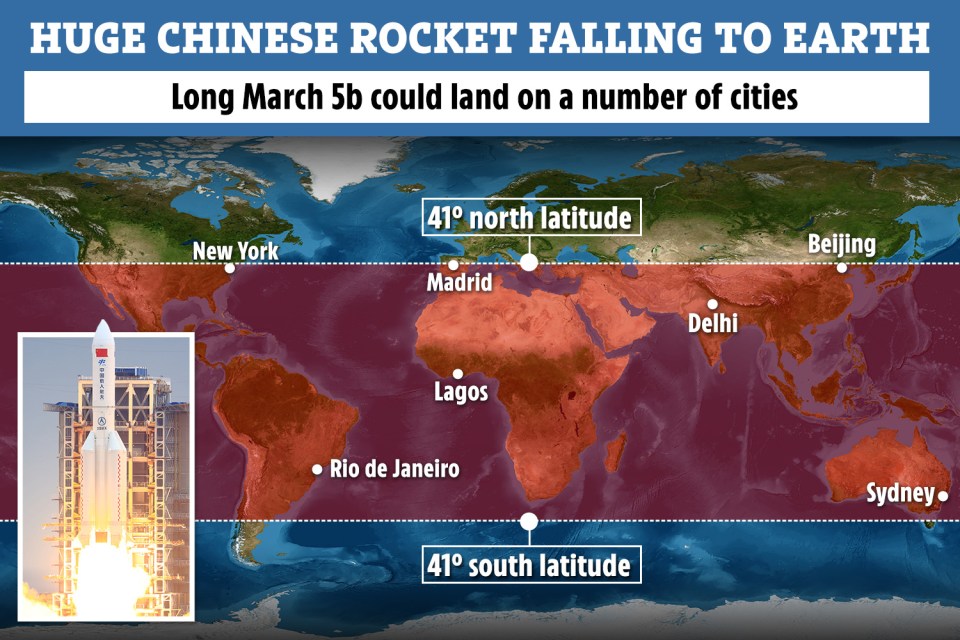 The rocket is currently hurtling back to earth at four miles a second and could fall anywhere between 41degrees north and south, also taking in Beijing, Sydney, Delhi and Rio de Janeiro.

Debris from the Falcon 9 rocket came crashing down near Seattle last month, dropping tanks on Washington State in the process.

McDowell said he hopes China has developed the ability for the Long March 5b to make a controlled re-entry separating from Tianhe.

“Since 1990 nothing over 10 tons has been deliberately left in orbit to re-enter uncontrolled.”

China is aware of the potential uncontrolled descent

“It is always difficult to assess the amount of surviving mass and number of fragments without knowing the design of the object, but a reasonable rule-of-thumb is about 20-40 per cent of the original dry mass,” he said.

n May 2020, another Long March 5B rocket slammed through the atmosphere, partially burning up on its descent.

The core fell largely into the Atlantic Ocean, but some debris landed in West Africa.

According to the South China Morning Post, some chunks of debris crashed into inhabited villages in the Ivory Coast, though no injuries were reported.

Astronauts will live in the Tian He module[/caption]

The module that the rocket was delivering, named Tian He, will become become living quarters for three crew members.

China aims to complete its Chinese Space Station, known as Tiangong by the end of 2022, state media reported, after several further modules are launched.

When complete the space station will orbit Earth at an altitude of 211 to 280 miles.

The largest and most famous uncontrolled re-entry occurred in 1979 when NASA’s 76-ton Skylab debris across the Indian Ocean and Western Australia.

Most read in Tech

SEE YOU IN COURT


Apple has to face Epic Games in court over Fortnite ban


Four hidden features that Apple just added to your iPhone

In 2020, a Chinese rocket booster has exploded after landing on a town in the country’s Shaanxi province.

Footage of the incident posted to Chinese social media showed the booster plummeting to Earth following a satellite launch on Monday.

The rocket part erupted in a ball of orange smoke after crashing back to Earth, apparently narrowly missing a school.

Teen Mom Jade Cline laughs off unattractive meme of herself and says ‘I love the internet!’ after Brazilian butt lift

Why does air come out my ear when I blow my nose? DR MARTIN SCURR answers your health questions

SAVING money isn’t just about cutting back or bagging a discount. You can also save cash…