US aircraft carrier USS Nimitz was deployed to the Gulf just days before the killing of Iran’s top nuclear scientist, it has emerged.

The 101,600 ton warship arrives in a region on the brink of a new crisis as Tehran accused Israel of assassinating Mohsen Fakhrizadeh.

Mohsen Fakhrizadeh was killed in an assassination near Tehran[/caption]

US Navy officials have however insisted the deployment is not related to any “specific threats” in the region.

It was also claimed the carrier’s arrival is to cover for the withdrawal of US troops from Iraq and Afghanistan.

USS Nimitz is one of the biggest warships in the world – a nuclear-powered behemoth capable of carrying 90 warplanes and helicopters.

She has been involved in campaigns against ISIS and recently was deployed to the South China Sea alongside the USS Ronald Reagan.

Tensions between the US and Iran have flared under the presidency of Donald Trump as he takes a tough line on the regime’s nuclear programme.

Iran continue to insist its ambitions are peaceful as it is feared to be secretly developing a nuclear weapon.

And questions are now being asked about what involvement – if any – the US had in the shooting of Fakhrizadeh.

The scientist had has been described as Iran’s own Robert Oppenheimer and was key to their nuclear ambitions.

However, the US Navy have insisted that the arrival of USS Nimitz is not linked to the recent tensions flaring in the Middle East.

Commander Rebecca Rebarich, spokeswoman for the U.S. Navy’s Bahrain-based Fifth Fleet, said: “There were no specific threats that triggered the return of the Nimitz Carrier Strike Group.”

She said the redeployment was related to a US drawdown in Iraq and Afghanistan.

The commander added: “This action ensures we have sufficient capability available to respond to any threat and to deter any adversary from acting against our troops during the force reduction.”

Pictures today have shown protests in Tehran as they burn American and Israeli flags alongside pictures of Trump and president elect Joe Biden.

Iranian protesters burn the flags of US and Israel [/caption]

Meanwhile, Iran’s supreme leader Ayatollah Ali Khamenei called for the “definitive punishment” of those behind the assassination of Fakhrizadeh.

He made his pledge in a statement on his official website after Iranian President Hassan Rouhani appeared on TV and blamed Israel.

Fakhrizadeh was injured after gunmen fired at his car in an ambush near Tehran – and later died of his catastrophic injuries.

Rouhani had earlier accused Iran’s arch-foe Israel of acting as a “mercenary” for the US and seeking to create chaos by carrying out the assassination.

Rouhani vowed that Iran will not “leave this criminal act unanswered” and will retaliate “in due time”.

It came after the publication reported rump had discussed the possibility of a final strike on Iran’s nuclear site at Natanz before he left the White House. 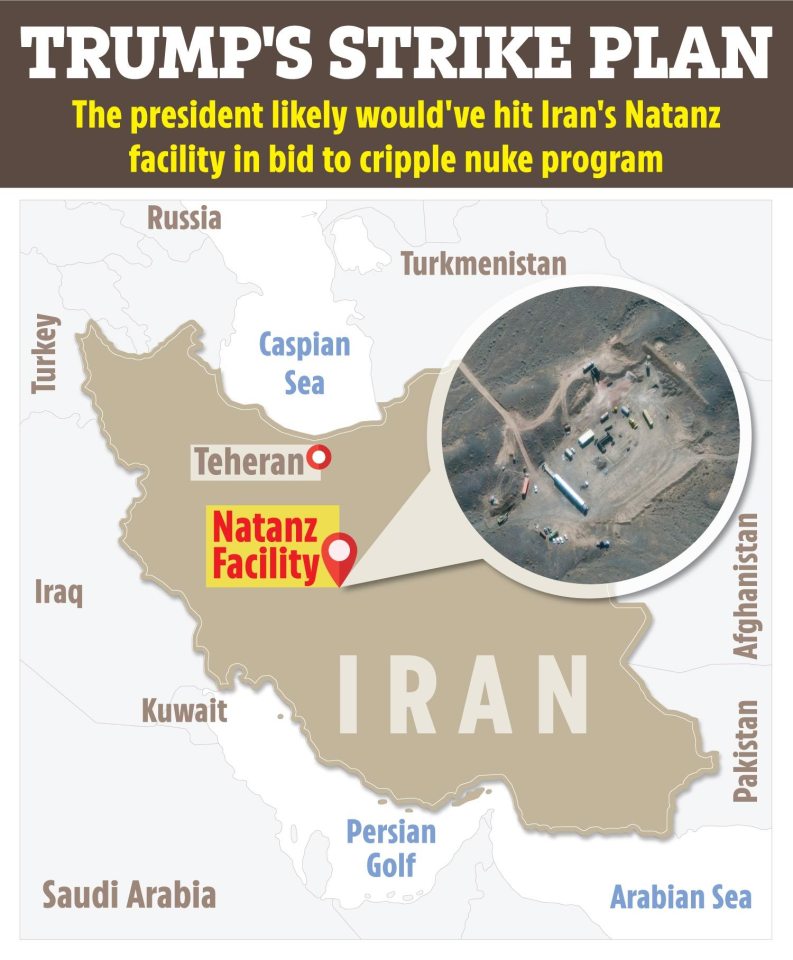 B-52 nuclear capable bombers have also arrived in the Middle East in what could be seen as a warning to Iran.

US Central Command announced the arrival of the heavy bombers this week, saying the planes would “deter aggression and reassure US partners and allies”.

At least three of the Stratofortress planes – the largest aircraft in the US Air Force – flew to Israel before heading on to a US base.

It is the third time a 18 months that the B-52 bombers have been deployed in a military muscle flex seemingly directed at Iran.

Despite being talked out of the strike, officials have said that Trump might still look at other ways to hit Iran.

It comes after Trump had warned Iran they had been “put on notice” in a fiery interview.

“If you f*** around with us, if you do something bad to us, we are gonna do things to you that have never been done before,” he said.

And the latest flare-up also followed his firing of defense secretary Mark Esper, a move which rattled officials at the Pentagon.

Meanwhile, the Ayatollah’s adviser Dehghan warned the US against any military escalation in the days before the assassination.

He said: “A limited, tactical conflict can turn into a full-fledged war.”

Iran has taken the opportunity to show off a new assault carrier which is seen as a response to the US Navy in the Gulf.

Former Defense official turned Democratic Michigan representative Elissa Slotkin said: “There would only be a few reasons to fire a secretary of defense with 72 days left in an administration.”

“One would be incompetence or wrongdoing, which do not seem to be the issue with Secretary Esper,” she said.

“A second would be vindictiveness, which would be an irresponsible way to treat our national security.”

“A third would be because the president wants to take actions that he believes his secretary of defense would refuse to take.”


Pregnant teen found dead 1,400 miles from home after being missing for 5 weeks


Couple arrested after 'torturing' girl, 9, who was pulled unconscious from tub

Trump now enters his lame duck period in office and the mulling of the strike shows how global threats may impact his final days in office.

Any talk of a strike on Iran will push away the president’s supporters, who openly oppose any conflict in the Middle East.

Increasing tensions with Iran will also harm Biden’s chances to revive the 2015 Iran nuclear deal that Trump pulled out of in 2018.

Meanwhile, UN’s nuclear watchdog has said Tehran is stepping up production of material that can be used for nuclear weapons at Natanz.

He explained: “In the scheme of things, particularly since most of them [buyers] are going to have some sort of professional advisor,…

JUST hours after Jesy Nelson sparked rumours she’s split from boyfriend Sean Sagar, he has been looking elsewhere. The 30-year-old actor has…

He explained: “In the scheme of things, particularly since most of them [buyers] are going to…

JUST hours after Jesy Nelson sparked rumours she’s split from boyfriend Sean Sagar, he has been…