BORIS Johnson has refused to rule out a third national lockdown after Christmas.

The PM today warned tougher restrictions could be needed to keep a mutant coronavirus strain “running out of control” in the New Year. 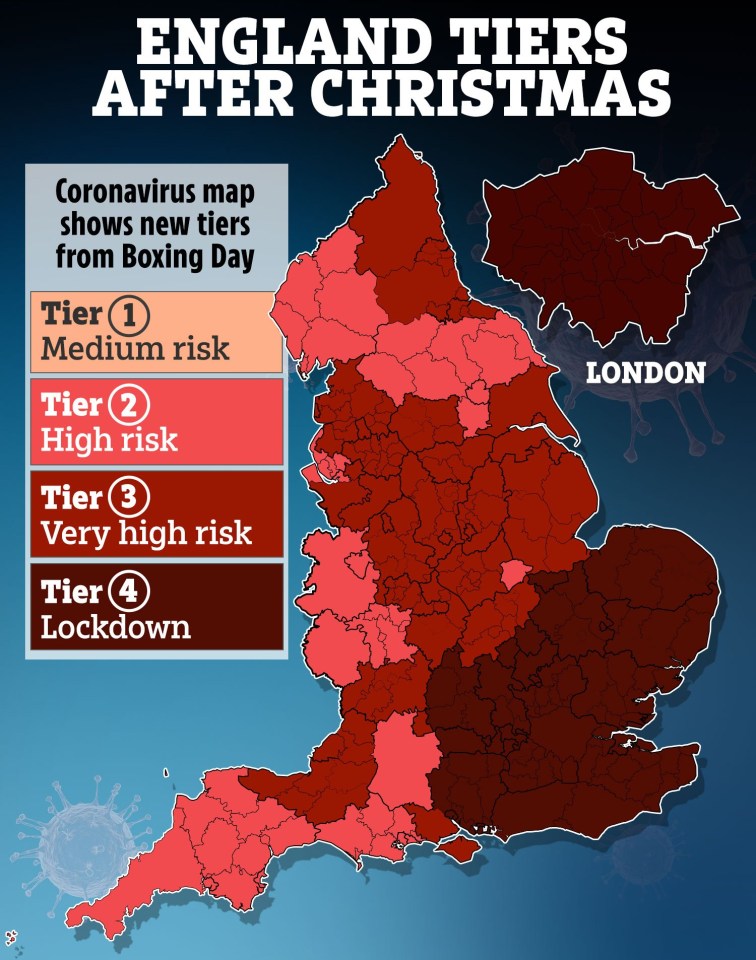 It comes as the rapid spread of the new variant, believed to be up to 70 per cent more contagious, saw millions of Brits in London and the South East of England plunged into a Tier 4 lockdown just before Christmas.

Further areas are set to be put into Tier 4 on Boxing Day amid fears the new strain has already spread across the country.

Speaking at a press conference to announce the UK’s post-Brexit trade deal with the EU, Mr Johnson said the new variant had led to “very considerable new pressure” – and did not another national lockdown.

The PM said: “We believe that we’re going to have to get through this tough period now with, as I have said many times, very tough restrictions, with tough tiering.

“As much as I regret that, I do think it is necessary for us to drive this virus now to stop it running out of control in January.

“We need to buy ourselves time to get the vaccine into as many arms of the elderly and vulnerable as we can.”

Mr Johnson acknowledged that the last-minute cancellation of Christmas for millions of Brits was “very tough”, but stressed it would “continue to be difficult” as the new variant is spreading at an alarming rate.

But the PM raised hopes of a return to normality as early as next Spring through the rollout of a vaccine, as Department of Health figures released this week showed 616,933 people had received their first dose. 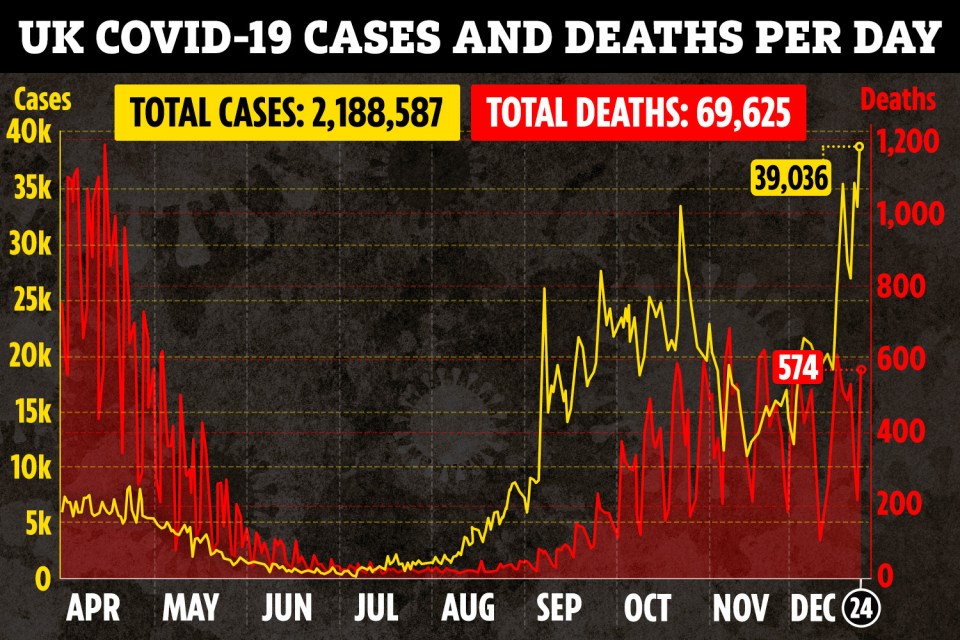 It comes as new analysis from the Office for National Statistics found that 49 per cent of new cases in England between December 14 and 18 were linked to the new strain, which was first discovered by health authorities in Kent in October.

Figures released today by Public Health England show a huge surge in infections in Essex, with Brentwood now the hardest-hit area of the UK with 1339.9 cases per 100,000 in the seven days up to December 20.

In sharp contrast to the Autumn, not a single area in the previously hard-hit North of England makes it into the Top 50 areas with the highest infection rate.

But there are growing fears that the new variant has already spread to other regions and could prompt a sharp rise in cases.

The emergence of the new strain poses a challenge for Britain’s exit strategy from the pandemic.

According to the Daily Mail, SAGE advisers have warned that the UK needs to speed up the rollout of a vaccine to a staggering two million Brits a week and maintain a national lockdown throughout January to avoid thousands of deaths.

Without tighter controls and an acceleration of the vaccine programme, the country risks suffering more deaths in the first half of 2021 than the whole of 2020, according to analysis from the London School of Hygiene and Tropical Medicine.

The paper, which is yet be peer reviewed, concluded that the new variant was around 56 per cent more transmissible than existing variants.


Snow map shows which areas could have White Christmas tomorrow

Researchers claim 90 per cent of all cases in the UK could be linked to the new strain by mid-January, the Guardian reports.

It comes as the UK today recorded 39,036 new Covid infections overnight in the second biggest ever leap.

Another 574 people have died as the toll hits highs last seen during the peak of the first wave in April. 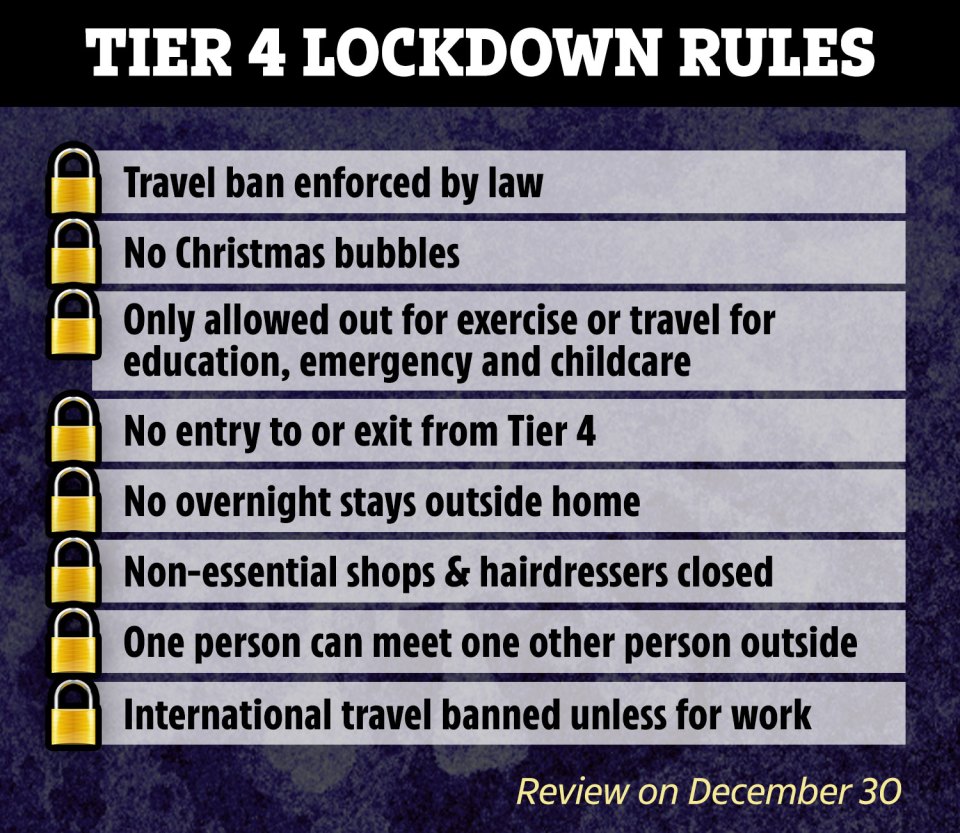 Susan Clarke, 72, was jailed for eight years for smuggling £1million in cocaine onto a cruise ship in Lisbon in December 2018.…

NEIL Cavuto is a steady figure on Fox News, but the anchor has faced his fair share of health issues over the…

SO HOW do you fancy managing the wealthiest football club on Earth? If it sounds like a dream job then let’s put…

With Pardons, Trump Seeks To Erase Stain Of Russia Probe

Who is Ruby Bhogal on The Great Christmas Bake Off 2020?

SO HOW do you fancy managing the wealthiest football club on Earth? If it sounds like…