Are you a secret spender? Britons hide an average of £600 worth of debt from their nearest and dearest (and it seems women are worse than men)

By Jane Denton For Thisismoney

Britons are concealing a total of around £8.5billion worth of debt from their friends and family, new research claims.

Swathes of secret shoppers are stacking up average hidden debts of around £600 each, with credit card use, going overdrawn, bank loans and not keeping up with bill repayments all proving problematic for many.

Over a quarter of Britons keep quiet about their financial situation, and women are worse than men when it comes to concealing their credit card debts, the findings from credit reference agency TransUnion suggest. 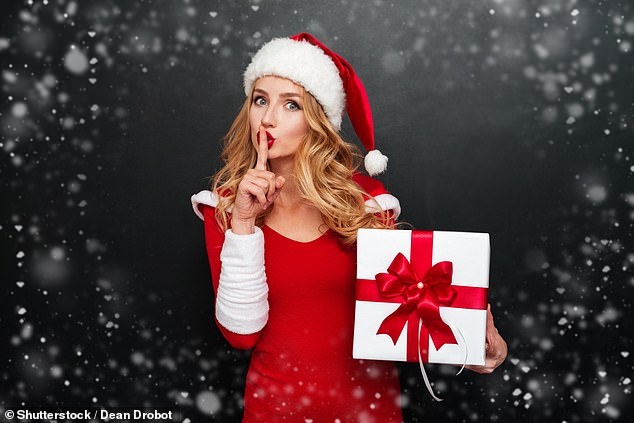 Hush: Britons are concealing around £8.5billion worth of debt from their friends and family, new research by TransUnion has claimed

One in 10 adults admitted to hiding their debts from loved ones, while 12 per cent said they often went on secret shopping splurges.

With millions of households largely confined to home up and down the country and Black Friday shopping deals all over the internet, the lure of rhe bargain is more likely than ever to tempt shoppers into overspending.

A growing number of spenders said they were shopping in secret to try and improve their mood, while others admitted to spending out of boredom triggered by lockdown.

Some people have been shopping in secret to try and feel a greater sense of control over their lives, while eight per cent admitted they were spending money they simply did not have.

Credit card debt is the most common type being hidden and it is more likely to be concealed by women than men (53 per cent against 37 per cent), according to the findings.

Twenty-two per cent of people admitted to signing up to a personal bank loan in secret, while 18 per cent said they often ended up being overdrawn and 16 per cent struggle to keep up with outstanding bill repayments.

Some people are even turning to loan sharks while others are becoming indebted to the same family members or friends they are hiding their secret spending from.

A former study by TransUnion found that over half of Britons admitted they had been negatively affected financially as a result of the pandemic, meaning overspending looks set to become an even more serious problem than it is now.

Kelli Fielding, TransUnion’s managing director of consumer interactive in the UK said: ‘Online purchases have been the cornerstone of our shopping during the pandemic so it’s really important for people to keep track of spending so they don’t overstretch themselves financially.’

She added: ‘It’s very worrying to know that many are also hiding financial struggles from those close to them, particularly at a time like this when we’re all facing economic uncertainty, and this secret spending is likely to get worse during the festive season.

‘No one should be afraid or embarrassed to talk openly about money worries – being honest about what’s owed and what you’re spending is essential when it comes to getting back in control of your finances.’

At noon on Friday, Nationwide Building Society released an updated about Black Friday spending using its cards. The group said there had been more than 2.3million transactions made in the time up to 12pm, marking a 2 per cent increase on the same period last year and 22 per cent higher on figures from last Friday.

Four tips to help you keep your online spending in check

It is all too easy to get carried away online and snap up a myriad of items you do not need and cannot afford.

Here are four tips from TransUnion to help you spend within your means this Christmas:

1. Stick to a monthly budget

Work out your monthly income and pay all essential outgoings in the first instance, such as mortgage or rent, utility bills and phone contract.

This will give you a clear indication of how much you can budget for shopping, and can help you avoid defaulting on bills and ultimately impacting your credit score.

2. Keep up with your repayments

Make sure you are paying off any existing credit card or store card debt before taking on more.

Ideally you should pay more than the minimum payment each month and pay it on time to protect your financial standing. If you’re struggling, stop and do the sums of any current repayments going out before doing any more shopping.

3. Be wary of tempting online adverts

Your phone and computer use internet cookies to track the types of online shopping sites you browse, and your spending habits.

From this information they are able to serve you adverts for relevant products and increase your likelihood to purchase. Be aware of this and try to decide if you really need it before clicking buy.

4. Don’t be blindsided by special deals

As enticing as an offer or deal might seem, it might not always be the cheapest option on the market.

Make sure you shop around as you may find something similar at a more competitive price.

Online grocery shopping took off last year. But can it ever be profitable?

Iceland holidays: Quarantine axed for vaccinated EU travellers but Britons will miss out

RADIO 2 presenter Jo Whiley was left shaken after being mugged on the street and having her phone stolen. The BBC star…

CHARLOTTE Dawson celebrated the birth of her first child by tucking into a McDonald’s after overcoming gestational diabetes. The new mum tucked…

Owners of some of the most popular Volkswagen models such as the VW Golf, Polo, Lupo…