Britons could be required to show QR codes on their phones to attend football matches, the theatre and other events, it was suggested today.

The unique codes would only be given to those who have been vaccinated against coronavirus, under plans being considered by ministers, to signal they can attend large gatherings currently considered to be ‘high risk’.

Those who refuse to get the Covid-19 jab would likely be refused entry to venues, as part of the same proposals. Health Secretary Matt Hancock this week refused to rule out making vaccination mandatory for all UK citizens.

It has previously been suggested that the NHS Covid-19 app could be recruited to identify those who have antibodies against the virus.

Mr Hancock hinted in May it could be used to display a code for those who are thought to have protection against the virus, which could allow them to return to a more normal life and evade some restrictions. 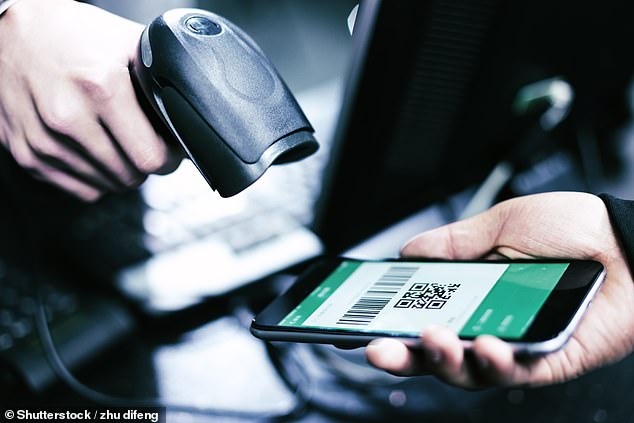 The QR codes will only be given to those who are vaccinated against Covid-19, under plans being floated by ministers. They stressed these are in the ‘early stages’. (stock photo)

WHO IS FIRST IN LINE FOR A COVID VACCINE IN THE UK?

The Joint Committee on Vaccination and Immunisation (JCVI) says care home residents and staff are among those who should be given the jab first.

The interim guidance says the order of priority should be:

But the JCVI stressed this list was ‘not considered definitive’ as more data is still being collected on at-risk groups.

Whitehall sources stressed to The Daily Telegraph that the proposals were in their infancy and formal discussions were yet to be started.

A source told the newspaper that it had already been suggested that spectators at the Tokyo Olympics will be required to be vaccinated before attending.

‘One way of opening up society would be those people who have had vaccinations carrying some kind of QR code or some sort of immunity certification which shows that they have been tested.’

Two vaccines have been shown to be effective against Covid-19, pouring cold water on fears that one may never be found.

Moderna was the second to confirm its vaccine worked this week, after early trials showed it could be up to 94.5 per cent effective against the virus.

It followed hot on the heels of Pfizer, which confirmed last week its shot was 90 per cent effective according to early trials.

Having a vaccine that is up to 90 per cent effective is vital, as it means it will trigger the production of antibodies that stop the virus sparking an infection in up to 90 per cent of those that are given the shots.

Scientists have said vaccines need to be at least 60 per cent effective to generate herd immunity, which is when enough people have protection against a virus to stop it spreading in a community.

This means the elderly and vulnerable are much less likely to be exposed to the virus, get infected by it and later become hospitalised.

A vaccine is considered to be a sure way to end the pandemic because it primes the body to fight off the infection. This stops those who are exposed to the virus from catching it, getting sick, and ending up in hospital.

The UK scrambled to purchase 5million doses of Moderna’s vaccine following its announcement on Monday, but got them at £7.50 ($10) more per dose than the price paid by the US. The country’s Vaccines Taskforce had already secured 40million doses of Pfizer’s vaccine before the announcement.

The breakthrough prompted scientists in the UK to say the country could be ‘back to normal’ as soon as spring next year.

The first Covid-19 vaccines are expected to be administered in December, with health and social care workers and the elderly first in line. 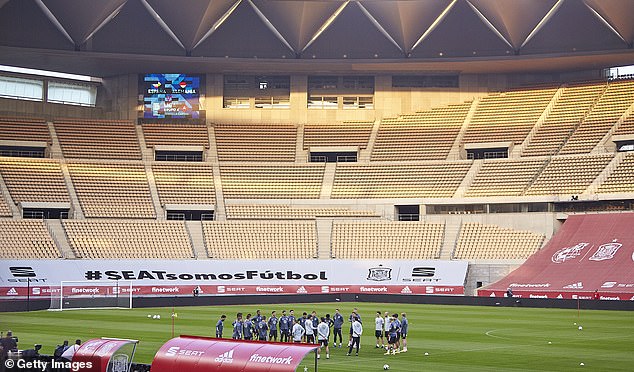 In Germany stadiums are allowed to open and be 20 per cent full in areas where coronavirus infection rates are below 35 cases per 100,000 people. No local authorities have infection rates this low in the UK. (stock photo)

Mr Hancock told a Number 10 press conference in May that ‘immunity passports’ could be rolled out for those who have antibodies against the virus, which he said would allow them to go back to work.

But this was criticised by experts as offering a ‘perverse reason’ for someone to get infected with the virus and potentially put themselves at risk.

They also said that errors with the tests, and uncertainties about the strength and life-span of immunity from a natural infection, means that someone could end up circulating in the community while still being at risk of catching the virus.

They said that with a vaccine, however, the situation would be different because it has been trialled and shown to provide immunity against the virus.

Dr Alexandra Phelan, from the Centre for Global Health Science and Security in the US, wrote in The Lancet in May that the development of a vaccine could lead to the World Health Organization revising its guidance to say those who have received a shot against Covid-19 should be issued with a certificate.

It comes after the Cabinet Office’s Behavioural Insights Team (BIT) – also known as Number 10’s nudge unit – told ministers they need to find a way to offer incentives to people to take part in mass-testing programmes.

They made their recommendations after observing the mass testing of 3.4million people in Slovakia, with those who tested negative handed a paper certificate and told they were no longer subject to restrictions ordering them to stay home except for travelling to work and essential shopping.

The unit said similar incentives need to be offered in the UK for any mass testing scheme to work, and recommended the roll out of paper wristbands for those who test negative.

They added that lotteries could be rolled out at testing centres, alongside partnerships with local businesses and subsidies for travel to testing sites.

It comes amid reports fans may be allowed into sporting events in areas of the country with low infection rates under proposals submitted to the Government.

Officials at the Department of Digital, Culture, Media and Sport made the suggestion, reports The Times, after the success of a similar system in Germany.

The German Government is allowing stadiums to open and be up to 20 per cent full if the number of coronavirus cases in their area is below 35 cases per 100,000 people.

Whitehall officials said the scheme, if it gets the green light, is unlikely to come into force until the new year and will most likely only apply to areas in Tier One.

The latest data from Public Health England shows that in the week ending November 8, no local authority in the UK had an infection rate below this level.

The lowest infection rate was in Cornwall and the Isles of Scilly, where there were 60.9 coronavirus cases per 100,000 people.

Wearing three layers of face coverings can help protect you against infection with the novel coronavirus. Public health experts say this does…

Jack Wilshere next club odds: Rangers favourites to beat Arsenal and Aston Villa to transfer after come and get me plea

Wearing three layers of face coverings can help protect you against infection with the novel coronavirus.…

UK holidays: Can we go on holiday for Easter?

Tim Matheson net worth: What is Virgin River star's net worth?