A BRIT’S spy wife has gone into isolation with her husband after being diagnosed with the new mutant Covid strain after flying on a packed passenger jet to Italy.

The unnamed couple were tested after they flew from London to Rome last weekend just hours before PM Boris Johnson announced his latest pandemic clampdown.

The 42-year-old woman – an Italian secret agent – tested positive for the new strain after complaining of feeling unwell but her partner only had the common coronavirus bug.

They were among 200 who flew on the Alitalia flight from Heathrow to Rome and now those sat in the two rows in front and two rows behind them are being traced.

Health officials said the couple are in isolation in their apartment in the Italian capital and are being monitored but both were reported to be ”well”.

There are also unconfirmed reports that the woman’s partner, who was identified only by the initials BG, is a 45 year old former member of MI6 – the British overseas intelligence service.

A source said:”The woman has only just been recruited by SISDE (Italian overseas intelligence) and was on her first posting in London.

”Her partner is British, ex military, so it was thought it would be a good assignment as she speaks perfect English. 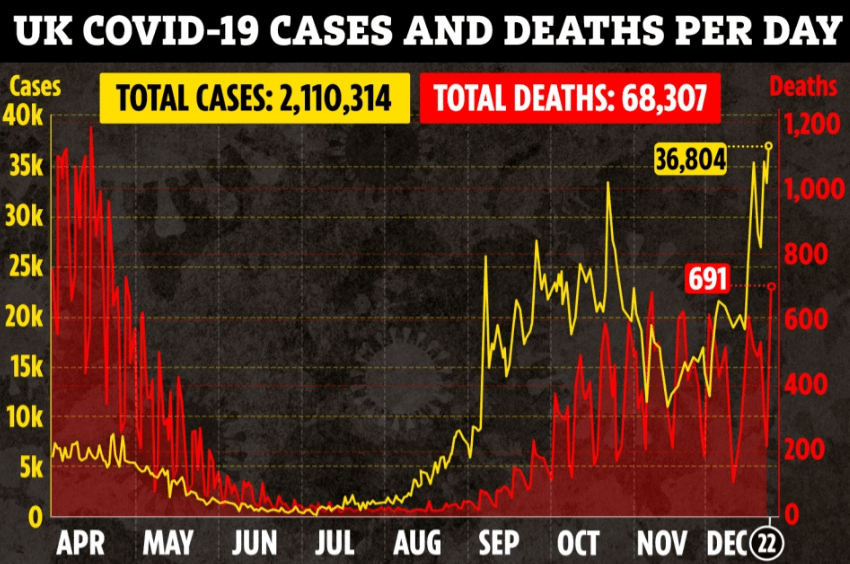 ”Both are asymptomatic and doing well but there are fears she may have spread the virus to the Italian intelligence HQ so staff are being monitored there as well.”

The woman is said by health chiefs to have a ”high viral load” and her British partner now works for a bank in the City of London and his colleagues have been informed as well.

Italy is among more than 40 countries that have banned flights from the UK to protect itself from the new UK coronavirus variant.

Health staff are now trying to trace more than 20,000 people who flew into the country from Britain during the last two weeks to test them.

It was first identified in September, according to scientists at COVID-19 Genomics UK Consortium (COG-UK), who have been working with Public Health England (PHE).


Official R rate could be up to 1.5 in parts of UK as new strain spreads

The first case was found in Kent on September 20, followed by London the next day, according to a report on behalf of COG-UK.

Now, the strain accounts for over 60 per cent of infections in London, according to Sir Patrick Vallance, the chief scientific adviser, up from 28 per cent in early November.

The new strain may be up to 70 per cent more transmissible, according to early analysis.

MANCHESTER UNITED are interested in signing Ajax wonderkid Ryan Gravenberch, according to reports. But the Red Devils will have to deal with…

MANCHESTER UNITED are interested in signing Ajax wonderkid Ryan Gravenberch, according to reports. But the Red Devils will have to deal with…

High cholesterol: Where to spot 'warning signs' and how to lower high levels

High cholesterol is often the precursor for serious and potentially life-threatening conditions hence the pertinence of spotting the early warning signs. You…

Which areas could enter Tier 4 next?

MANCHESTER UNITED are interested in signing Ajax wonderkid Ryan Gravenberch, according to reports. But the Red…

MANCHESTER UNITED are interested in signing Ajax wonderkid Ryan Gravenberch, according to reports. But the Red…

High cholesterol: Where to spot 'warning signs' and how to lower high levels