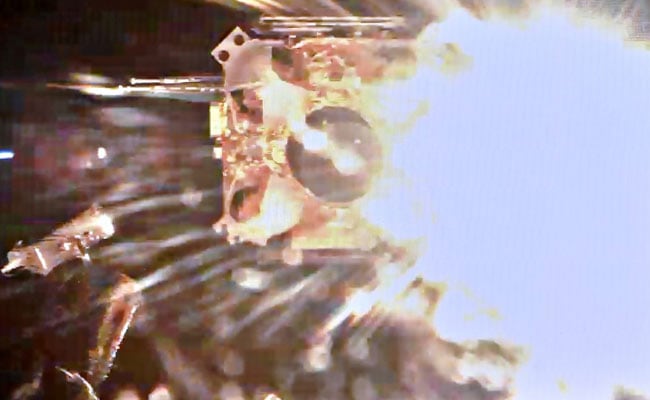 A Chinese space probe has lifted off from the surface of the Moon to return to Earth, an ambitious effort to bring back the first lunar samples in four decades.

Beijing is looking to catch up with the US and Russia after taking decades to match its rivals’ achievements and has poured billions into its military-run space programme.

A module carrying lunar rocks and soil was launched into orbit by a powerful thrust engine, officials said of the mission that landed Tuesday on the Moon.

Video footage from China’s state broadcaster CCTV showed the probe taking off from the surface of the Moon in a bright burst of light.

The space agency said that “before lift-off, the Chinese flag was raised on the moon’s surface”.

It added that this was the first time that China had achieved take-off from an extraterrestrial body.

The module then must undergo the delicate operation of linking up with the part of the spacecraft that is to bring the specimens back to Earth, official news agency Xinhua reported.

Scientists hope the samples will help them learn about the Moon’s origins, formation and volcanic activity on its surface.

If the return journey is successful, China will be only the third country to have retrieved samples from the Moon, following the United States and the Soviet Union in the 1960s and 1970s.

This is the first such attempt since the Soviet Union’s Luna 24 mission in 1976.

The spacecraft’s mission was to collect two kilograms (4.5 pounds) of material in an area known as Oceanus Procellarum — or “Ocean of Storms” — a vast, previously unexplored lava plain, according to the science journal Nature.

Xinhua, which called Chang’e-5 “one of the most complicated and challenging missions in Chinese aerospace history”, reported the probe worked for about 19 hours on the Moon.

The samples were to be returned to Earth in a capsule programmed to land in northern China’s Inner Mongolia region, according to US space agency NASA.

Under President Xi Jinping, plans for China’s “space dream”, as he calls it, have been put into overdrive.

China hopes to have a crewed space station by 2022 and eventually send humans to the Moon.

A Chinese lunar rover landed on the far side of the Moon in January 2019 in a global first that boosted Beijing’s aspirations to become a space superpower.

The latest probe is among a slew of ambitious targets, which include creating a powerful rocket capable of delivering payloads heavier than those NASA and private rocket firm SpaceX can handle, a lunar base, and a permanently crewed space station.

China’s taikonauts and scientists have also talked up crewed missions to Mars.

More than 4,800 boxes of ice cream are contaminated with Covid-19 in China after samples test positive

Smartwatches and true wireless stereo (TWS) earbuds are reported to have spearheaded the growth of the wearable segment in 2020, new Counterpoint…

The agency has placed three separate warnings for the country – two yellow and one amber. They cover the UK’s eastern regions,…

The agency has placed three separate warnings for the country – two yellow and one amber.…