Britain today confirmed 2,613 Covid cases and 13 deaths, as an array of studies showed the number of people getting sick with the virus is continuing to fall.

Official testing sites picked up slightly more positive results than last Thursday – a 6.9 per cent rise on the 2,445 – but the daily death toll fell by 41 per cent on a week ago, when it was 22.

Another 404,226 people got their second vaccine dose yesterday, with another 139,097 being given the first jab. This means 16.3million people are now fully immunised and a further 34.9m have been given one.

Dr Rupert Pearse, from the Intensive Care Society, said: ‘Obviously it varies around the UK, but colleagues across the country tell me most surge ICUs have now closed. The surge area at my hospital is still open but only has a handful of patients. There are less than 10 patients [now] and at one point we had more than 150, so that gives you an idea of the scale.’

The figures come after the weekly Covid Symptom Study showed that fewer Britons are getting ill each day than at any point since the study began last year, with fewer than 1,000 cases now cropping up daily.

Published figures estimating 971 cases per day are now lower than in July and August last year when lockdown rules were almost completely lifted even though no-one was vaccinated.

Using reports from a million users of a mobile app, the study suggested the number of new cases per day had dropped another seven per cent in a week following a 10 per cent fall the week before. It adds to overwhelming evidence that coronavirus has all but disappeared in Britain.

In England the number of people developing symptoms each day remained the same as last week’s estimate at 756.

But data from both Public Health England and NHS Test & Trace showed the number of cases being spotted is still falling.

PHE’s weekly surveillance report showed infection rates have dropped in every region except the North West, and in every age group except five to nine year olds. Outbreaks are still shrinking in three quarters of local authorities, data also showed.

And statistics from the official testing programme show cases fell by eight per cent in the most recent week, even though near-record numbers of tests are being carried out. Test and Trace spotted 15,593 positive results between April 22 and 28, down from 17,033 the week before.

Businesses and MPs have called for Boris Johnson to loosen lockdown rules sooner because the lockdown and jab rollout have been such a success, warning of another lost summer if there are delays, but the PM is refusing to budge. 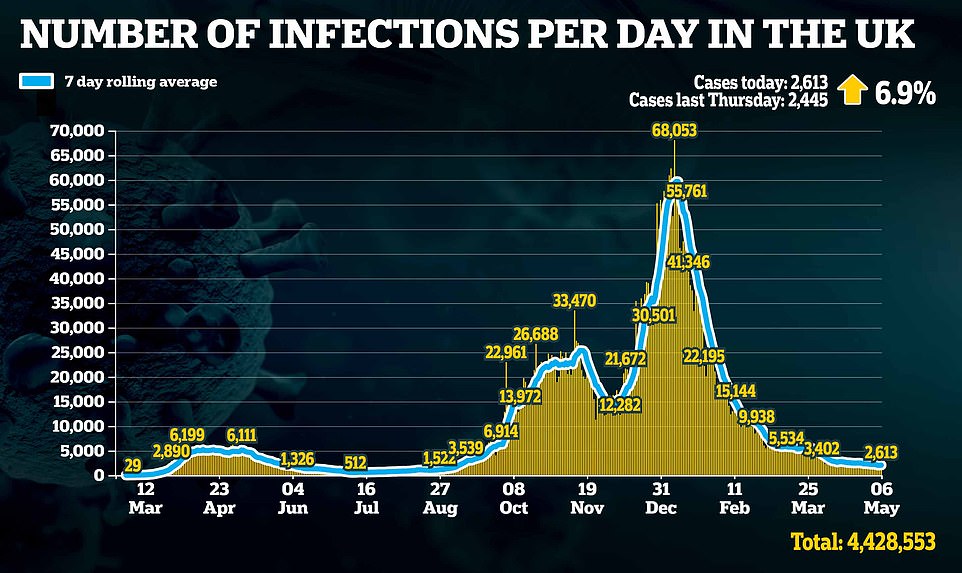 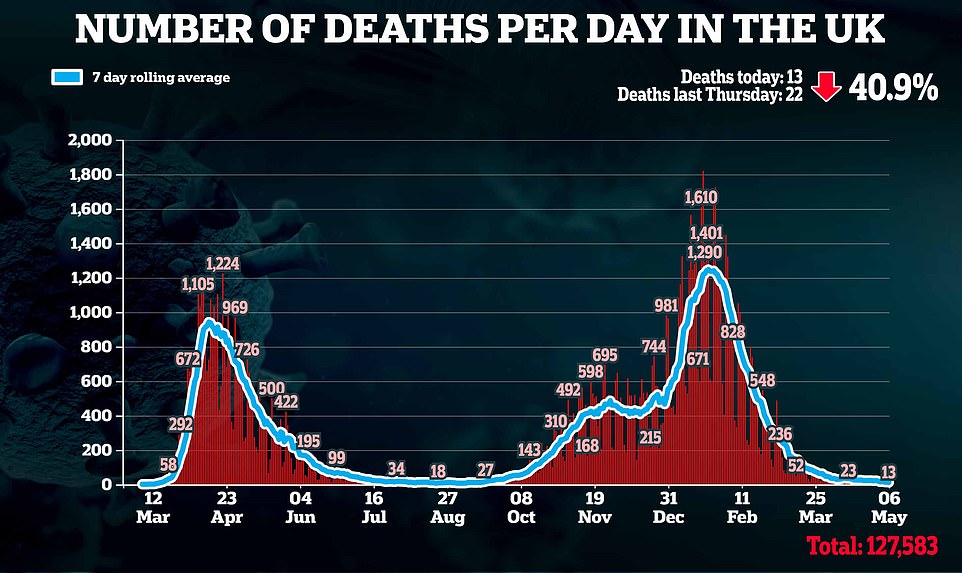 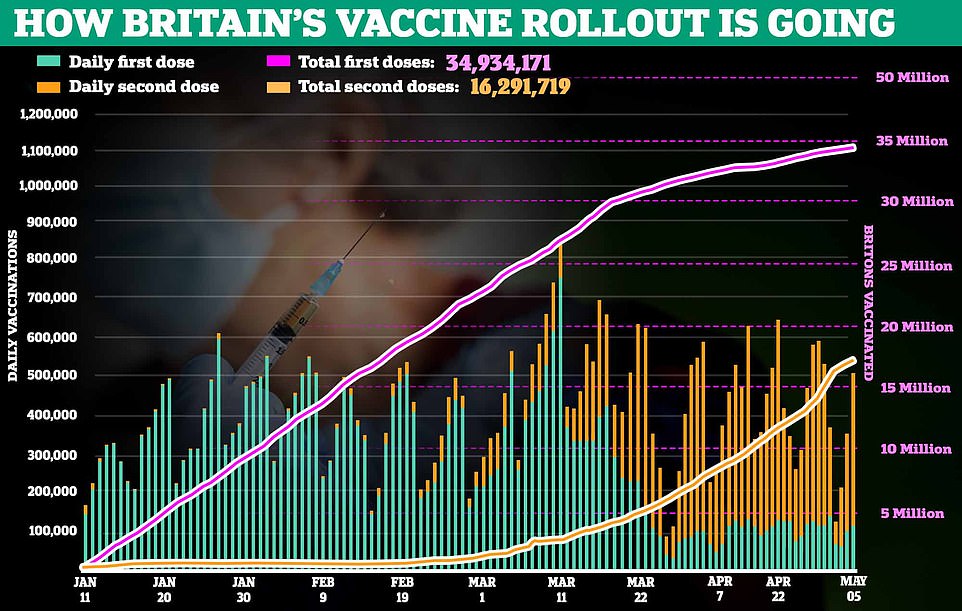 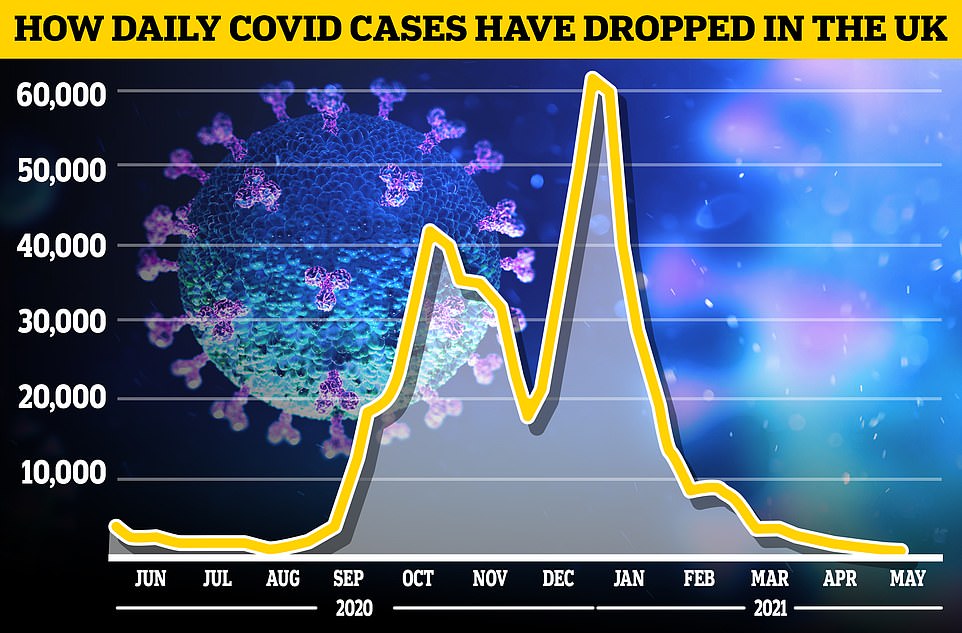 The Covid Symptom Study estimates the number of people in the UK developing illness each day has fallen from 1,046 last week to 971 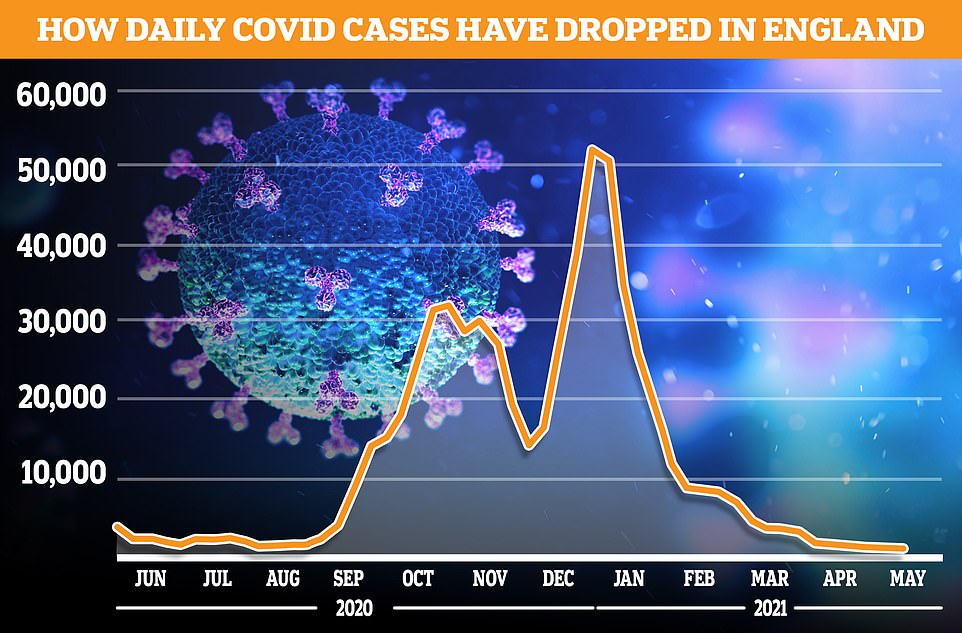 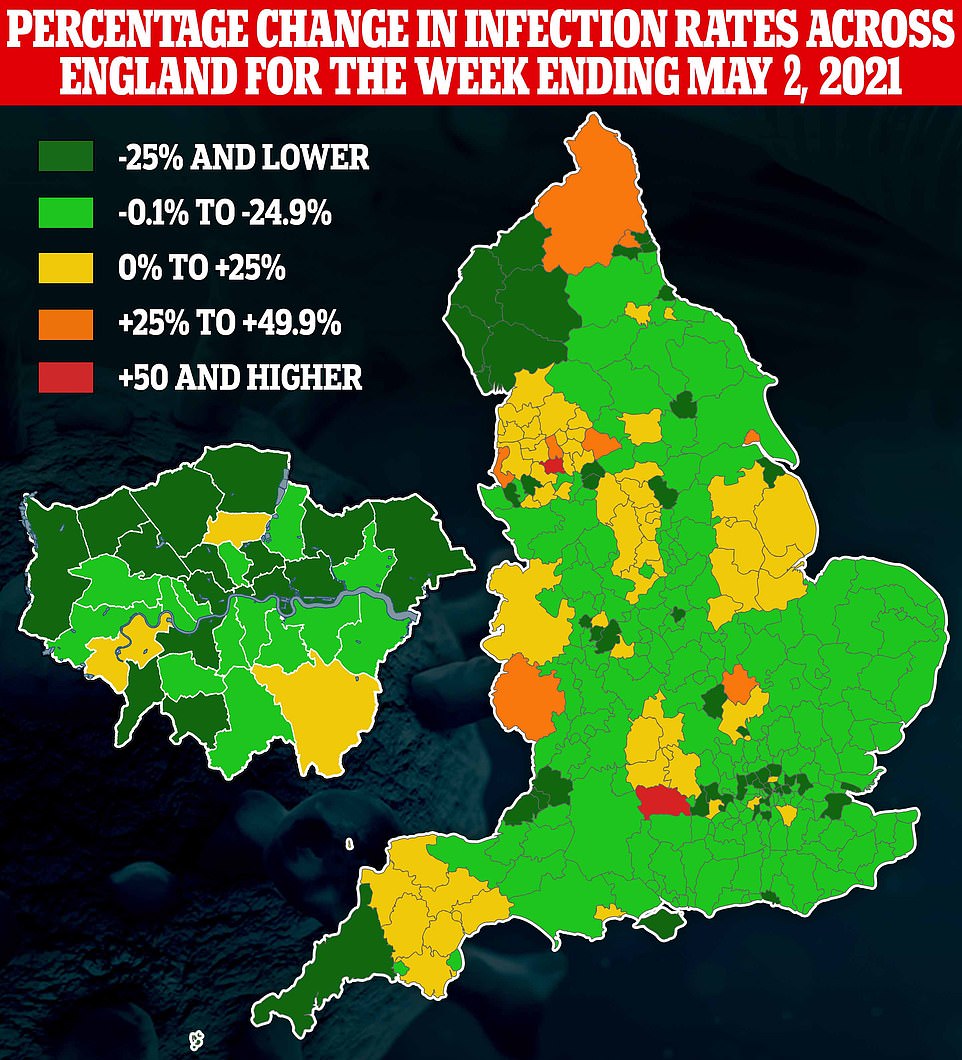 PHE’s weekly surveillance report showed infection rates have dropped in every region except the North West, and in every age group except five to nine year olds. Outbreaks are still shrinking in three quarters of local authorities, data also showed 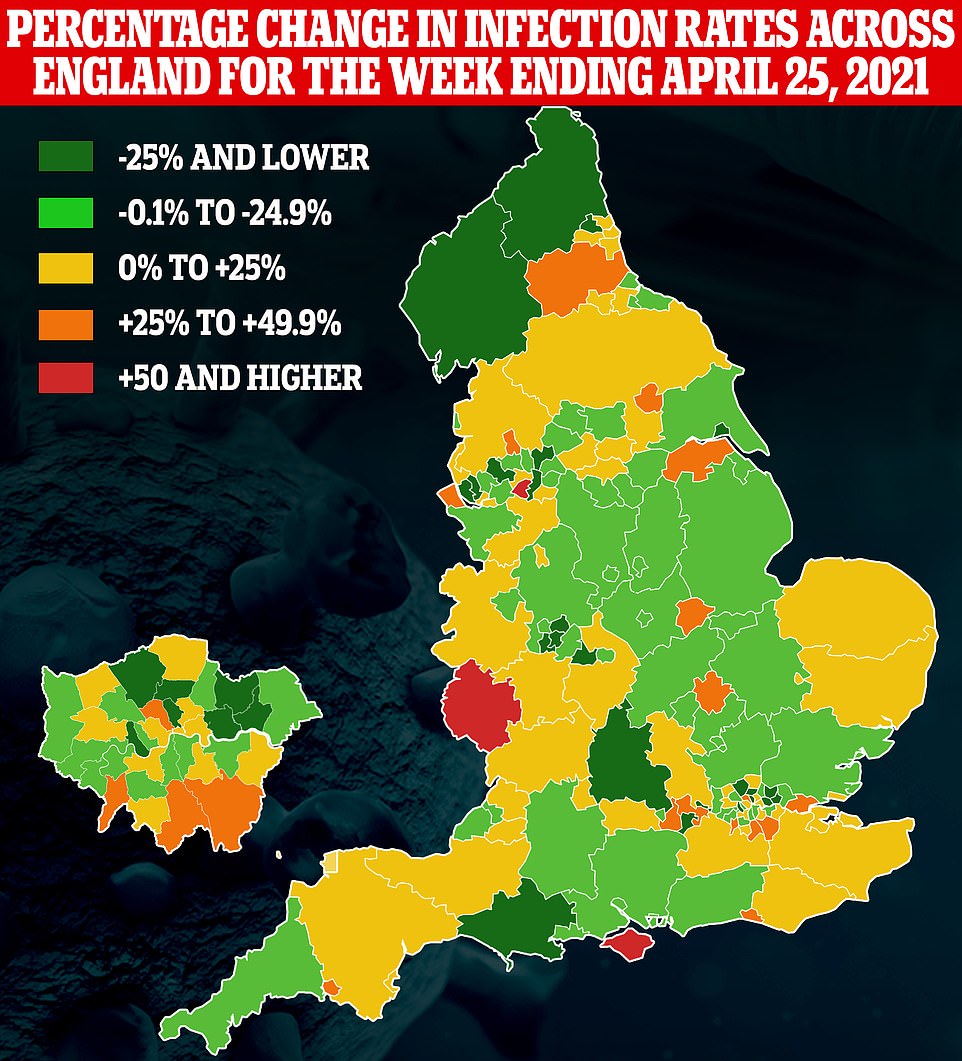 Despite every region seeing Covid cases decrease overall, some councils saw an increase in cases in the week ending April 25. Public Health England data breaks the country down into 149 different areas 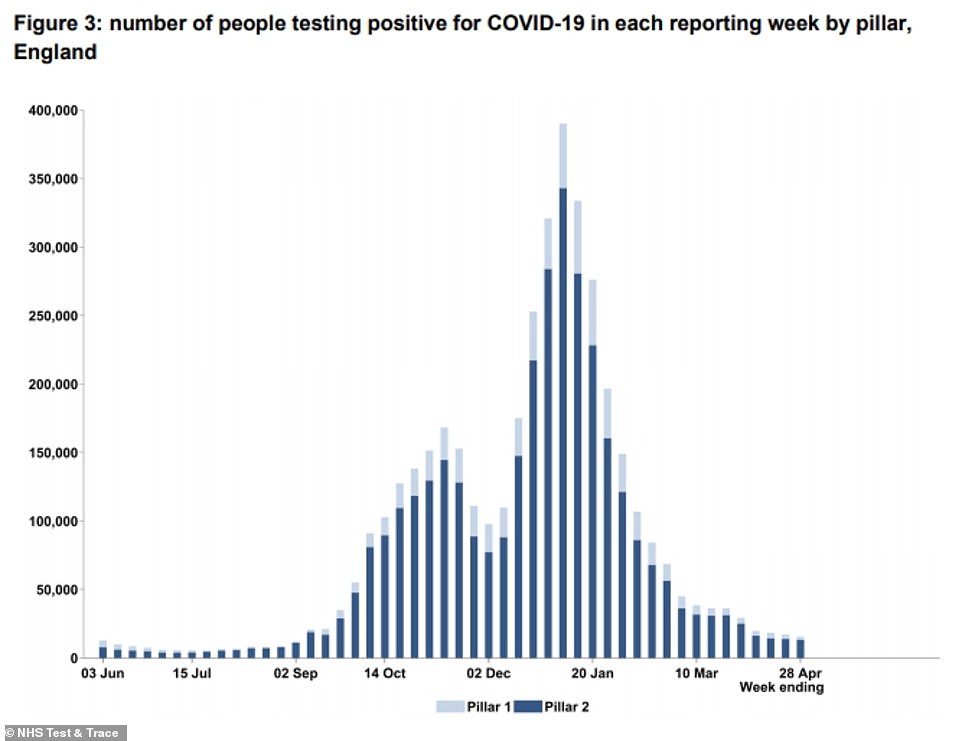 Positive test reports from NHS Test & Trace labs show that around 15,000 people were diagnosed with the virus last week, down from a peak of almost 400,000 in a week in early January 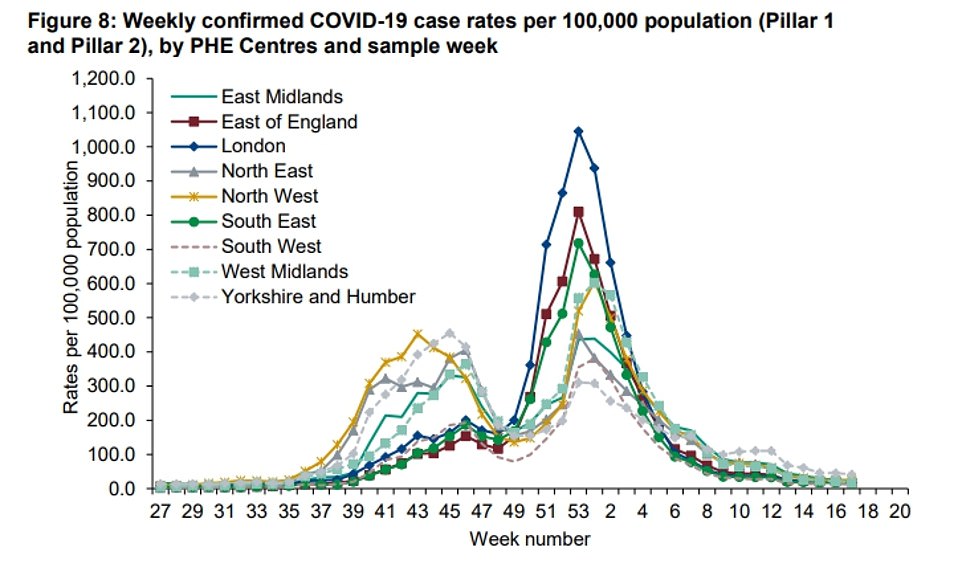 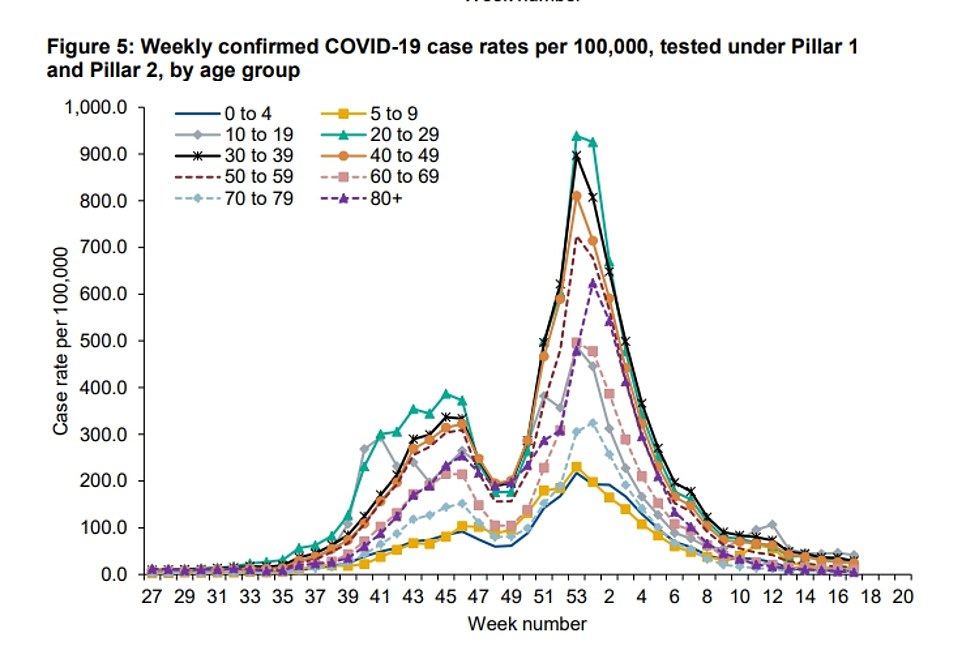 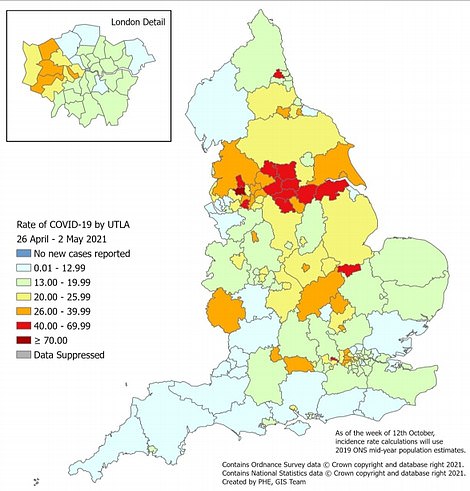 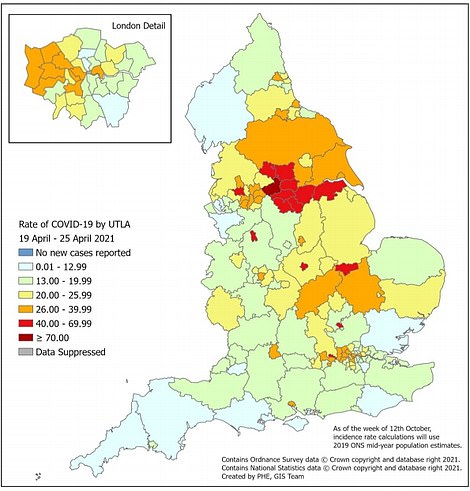 Covid infection rates have dropped in two thirds of local authorities in England, according to figures. The map on the left shows the size of outbreaks in every area of the country in the week ending May 2, while the map on the right shows figures for the week before 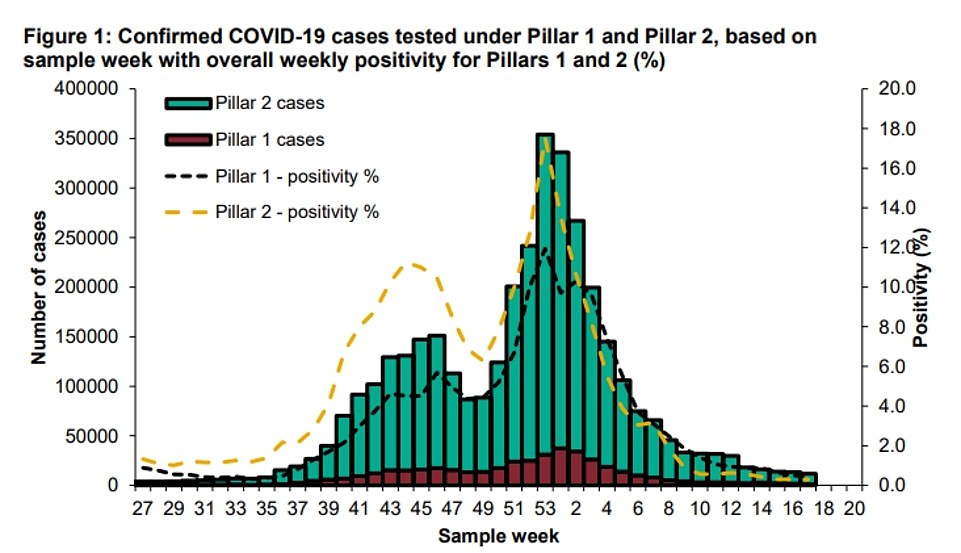 The Covid Symptom Study is based on members of the public’s self-reported symptoms, test results and vaccinations that come through an app run by healthtech company ZOE.

It estimates that one in every 4,276 people across the UK has symptomatic Covid on any given day – around 15,669 people – and suggests the R rate is around one, meaning the outbreak is not clearly growing or shrinking.

COVID NOW ACCOUNTS FOR ONE IN 38 DEATHS

More people are now dying from flu and pneumonia than Covid in England and Wales for the first time since the second wave took off, official figures revealed today.

Office for National Statistics data showed the virus was mentioned on 260 death certificates that occurred in the week ending April 23 — down 30 per cent on the week before.

But Covid was only listed as the underlying cause for 176 of the victims. For comparison, flu and pneumonia was behind 278 deaths in the same seven-day spell but mentioned on 1,203 certificates.

Covid was the leading cause of death during the second wave, claiming more than 1,000 lives a day at the peak of the crisis in January.

Experts said a successful vaccine roll-out forcing down Covid deaths, combined with more mixing leading to a resurgence in pneumonia-causing infections was behind the trend.

ONS figures showed Covid only made up 2.6 per cent of all fatalities recorded in England and Wales two weeks ago, compared to more than 40 per cent at the peak of the second wave.

Three out of nine regions in England — North East, East Midlands and the South West — went at least one day without a single Covid fatality occurring over the latest week.

The researchers said they saw 31 vaccinated people who got coronavirus after two doses of a jab and 87 after a single dose, out of a total of 4,449 test results over the course of a week.

They suggested the risk of getting infected after being fully vaccinated was around three times lower than in an unvaccinated person and that only one in 167,000 people were likely to experience it at current levels.

Professor Spector said: ‘ZOE’s data continues to suggest that the UK is entering an endemic phase as Covid has stabilised at very low levels, similar to rates seen last summer.

‘Such low rates are forcing all studies to examine their data collection methods, but reassuringly the ZOE figures follow the trends seen in official confirmed cases.

‘With most adults now vaccinated in the UK, we’re seeing a milder form of COVID emerge with less than one third of people experiencing classic symptoms in the first week of the disease.

‘Even if people are vaccinated, they should be aware there are more than 20 symptoms of Covid, many of them mild and that they can get a test after logging these symptoms in the ZOE app.’

The Test & Trace report added that huge amounts of people are taking rapid tests without symptoms to try and reduce their risk of transmitting the virus by accident.

Just over 5.6million lateral flow tests were conducted in England in the week to April 28, down slightly from 5.8million in the previous week.

The number of lateral flow tests peaked at just over 7.6million in the week to March 17, which coincided with the return of secondary students to school.

Since April 9, everyone in England has been eligible for rapid Covid tests twice a week.

By contrast, 960,867 lab-based PCR tests – the higher quality ones reserved for people with symptoms – were conducted in the week to April 28.

The numbers add to growing evidence that coronavirus is under control and vaccines have started to keep down infections, hospital admissions and deaths after they were slashed by January’s drastic lockdown.

PHE’s weekly report showed infection rates fell in every region except the North West, where it ticked up slightly from 24.1 cases per 100,000 people to 24.9.

Yorkshire and the Humber’s outbreak is still the biggest (41.7) — but has been dropping for almost two months.

When the data is broken down to a more granular level, it revealed outbreaks were shrinking in 112 of 149 local authorities.

Figures breaking down Covid rates among different age groups showed the only slight spike was among five to nine year olds (14.7 to 16.1). The infection rate in over-80s has never been lower (4.8).

MPs, businesses and pubs and restaurants have called for lockdown to end sooner  and even ‘Professor Lockdown’ Neil Ferguson is now optimistic that vaccines will squash the UK’s third wave of coronavirus and life in Britain will ‘feel a lot more normal by the summer’.

Professor Ferguson, the SAGE adviser and Imperial College London epidemiologist whose grim death toll predictions led Britain into its first lockdown last year, said this week that he expects jabs to help keep the UK out of lockdown for good.

He said on BBC Radio 4 this week: ‘Data on the vaccines is getting ever more encouraging, particularly when you get new data that was released just over a week ago which showed even if you do get infected [after having a vaccine] you are less infectious.

‘So that’s pushed our estimates of the scale of any autumn wave down.’

Every Debenhams store in the UK shut for good earlier this year after a drastic decline in profits. The company was bought…

The 2021 United Nations Climate Change Conference (COP26) will take place from Sunday 31 October to Friday 12 November. The summit will…