People who have already had Covid-19 ‘should not be blasé’ about the virus because up to one in 10 people could catch it again, a top scientist has warned.

Professor Danny Altmann, an immunologist at Imperial College London, today said the rate of coronavirus reinfection is ‘quite a lot higher’ than data suggests.

His comments come as Prime Minister Boris Johnson goes into a fortnight of self-isolation after coming into close contact with an MP who later tested positive. The PM claims he is ‘bursting with antibodies’ after he ended up in intensive care during his own severe bout of Covid-19 in the country’s first wave.

Professor Altmann, however, said although the risk of catching the disease again is ‘low’, it could happen to as many as one in 10 people and recovered patients should still take it very seriously.

Scientists have reported a handful of cases of coronavirus reinfection — but the circumstances around them are often hazy. Most scientists investigating the topic agree that it’s unlikely survivors will be struck down again within a year.

The Imperial expert said there had been around 25 ‘hard confirmed cases’ in the world of people catching Covid-19 twice, but that researchers think it is far more common.

And those who do get reinfected are likely to be protected from a severe bout of the disease, experts say. But whether it is more or less serious, Professor Altmann said, is still a topic for debate. 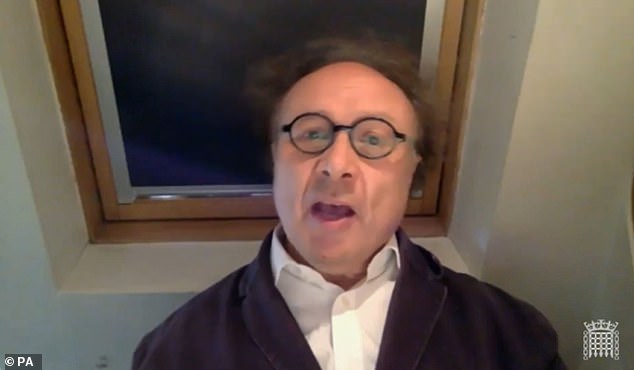 Professor Danny Altmann, an immunologist at Imperial College London, said people who have already had coronavirus ‘should not be blasé’ about the risk of catching it a second time

‘I read a lot about people saying one can’t be reinfected or there’s practically zero risk of reinfection,’ he said on BBC Radio 4’s Today programme.

‘That’s not quite true because, of 50million plus cases of infection in the world, we have more than 25 hard confirmed cases of reinfection, which you might say is negligible, but that’s because academically we set the bar quite high for defining reinfection.

‘Anecdotally, I think most of us think the rate of reinfection is quite a lot higher than that but not enormous.’

Professor Altmann’s comments come as the Prime Minister announced he has had another Covid scare after catching the virus in April left him in critical condition.

Mr Johnson today insisted he can run the country by Zoom as he hit back against criticism of his mask-free meeting with a coronavirus-infected Tory MP.

He will spend two weeks alone in his Downing St flat after he met with Conservative MP Lee Anderson last week and Anderson later tested positive.

The move comes at a time of extreme turbulence in Downing Street after the PM’s top aides Dominic Cummings and Lee Cain both resigned last week. 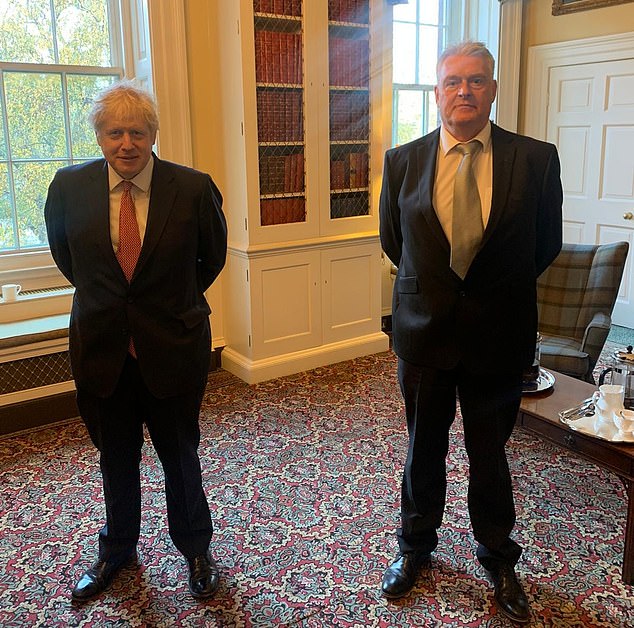 On Thursday, the Prime Minister held a 35-minute meeting with a group of MPs including Mr Anderson who later tested positive for the virus. Pictured: The PM and Mr Anderson at Thursday’s meeting

CAN YOU CATCH COVID AGAIN WITHIN SIX MONTHS OF BEATING IT?

Virologists have yet to get their head around the Covid-19 immunity puzzle because the disease has only existed in the world of science since January.

With some common illnesses such as chickenpox, the body remembers how to fight it and becomes able to fend it off before it takes hold.

But experts don’t yet know for certain how the body reacts to Covid-19, and believe people will catch it repeatedly like the common cold.

Only a handful of confirmed Covid re-infections have been recorded across the world, sparking hope survivors will be protected for at least six months.

Most scientists investigating the topic agree that it’s unlikely survivors will be struck down again within a year. And those who do are likely to be protected from developing a severe bout of the disease, they say.

Tests have shown many people who recover from the coronavirus have antibodies, disease-fighting proteins trained to fight off the disease.

Mounting evidence shows antibodies disappear in as little as eight weeks — but the proteins are only one type of substance that can produce immunity.

The immune system is a huge web of proteins that have different functions to protect the body against different infections.

T cells and B cells can also help the body to fight off disease but are more difficult to discover using currently available tests.

T cells – white blood cells which target and destroy cells already infected with the virus – are ‘durable’ and can last up to 17 years, studies have suggested.

But Mr Johnson insisted in a Twitter video today that he is ‘fit as a butcher’s dog’.

‘And actually it doesn’t matter that I’ve had the disease and I’m bursting with antibodies. We’ve got to interrupt the spread of the disease and one of the ways we can do that now is by self isolating for 14 days when contacted by Test and Trace.’

The PM is correct when he says it ‘doesn’t matter that I’ve had the disease’ because there is scientific proof people can get it more than once.

Studies have found patients who tested positive for Covid-19, then tested negative, have later tested positive a second time with a genetically different version of the virus, meaning it was a new strain that entered their body.

Confirmed reports are not common but the ones that do exist prove it is possible.

People with stronger immune responses after their first bout of illness are more likely to be able to fend off the infection a second time.

This is because a strong early immune response means the body creates more antibodies and T cells – which are critical to building a defence against the virus in case it gets into the body again.

Strong immunity means that someone’s body can destroy the virus as soon as it gets into the body and before it causes any symptoms.

It is not clear whether people can pass on the virus if they don’t get Covid-19 symptoms when they get a second infection.

Professor Altmann said: ‘My bottom line is not to be in any way alarmist because whatever the risk is it’s low.

‘My sense from some of our data and other people’s data is that it’s the people who’ve made the poorest, the most negligible antibody response the first time round who are most at risk of reinfection.

‘So that’s maybe 10 per cent of everybody out there who’s been infected in the first wave.’

He said that everyone who has tested positive for coronavirus in the past should still be strict about following social distancing rules and wearing masks, and act as if they have never had it.

He added: ‘I’ve got one take home message on the reinfection discussion: it’s not to be blasé because you’ve had it or you think you’ve had it because the risk is still there.’

A 25-year-old man has become the first person in the US to be struck down with the coronavirus for a second time – which struck him harder than his first bout of the disease.

The unidentified patient first tested positive in April after showing mild symptoms of a sore throat, cough, headache, nausea and diarrhea. But, after recovering and receiving two negative tests, he began experiencing similar warning signs in May.

He tested positive – 48 days after the first negative test – and suffered a more severe infection. He was hospitalized, required oxygen, and endured coughs, muscle aches and shortness of breath. An X-ray also suggested viral pneumonia, which can be deadly.

Genetic sequencing reveals the patient, of Washoe County in Nevada, was infected by two different strains of coronavirus. He is the world’s fifth known cases of COVID-19 re-infection.

The truth on COVID-19 immunity remains a mystery because the pathogen, known as SARS-CoV-2, has only been known to science for less than a year. But scientists are convinced the disease will be milder the second time round because the body will have already built up some natural immunity against it.

The latest case, published in The Lancet Infectious Diseases, challenges that theory and poses questions for any future vaccination programs, as well as those countries pushing a herd immunity strategy.

Experts described the case as ‘very concerning’. It comes after President Donald Trump controversially claimed he is immune to the virus and has a ‘protective glow’ that means he ‘can’t get it and can’t give it’.

This shows a timeline of the unnamed 25-year-old man’s two coronavirus infections. He is from Washoe County in Nevada. Genetic testing revealed he had been infected by two different strains of coronavirus 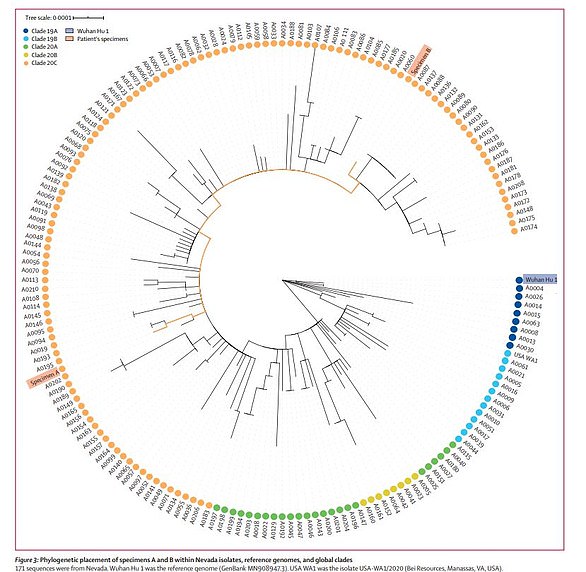 The chart above shows the various genetic strains of coronavirus. The two that infected the 25-year-old man are highlighted as specimen A (left) and specimen B (top right). The first virus is highlighted as Wuhan Hu 1 (mid-left). Mutations in the virus mean it could have different proteins on its surface, making it harder for the body’s immune system to fight it off

The American man was not named and had no underlying health conditions.

Although this doesn’t prove contracting the virus will not result in herd immunity, the scientists said everyone should observe protective measures including wearing a face mask, social distancing and hand washing.

Dr Mark Pandori, from the Nevada State Public Health Laboratory and who led the study, told DailyMail.com the patient may have received a ‘very high dose’ of the virus to become re-infected. This would have ‘overwhelmed’ the immune system, he said, leading to a more serious infection.

Re-infections may be occurring across the US, he warned, but that most are likely asymptomatic and hence going undetected.

‘If (that) is happening, we would have no way of knowing it,’ he said. ‘People wouldn’t feel inclined to get tested again. It’s also hard to confirm a re-infection case. Some labs are barely keeping hold of testing, let alone rest testing.’

He said the case ‘strongly suggests’ individuals should continue to take serious precautions against the virus including wearing a face mask, social distancing and handwashing.