BRITS given the coronavirus vacccine would still have to self-isolate as they could transmit the disease, it’s reported.

Scientists don’t yet know if people who are vaccinated can still be Covid carriers.

Medics will begin to vaccinate vulnerable Brits next week[/caption] 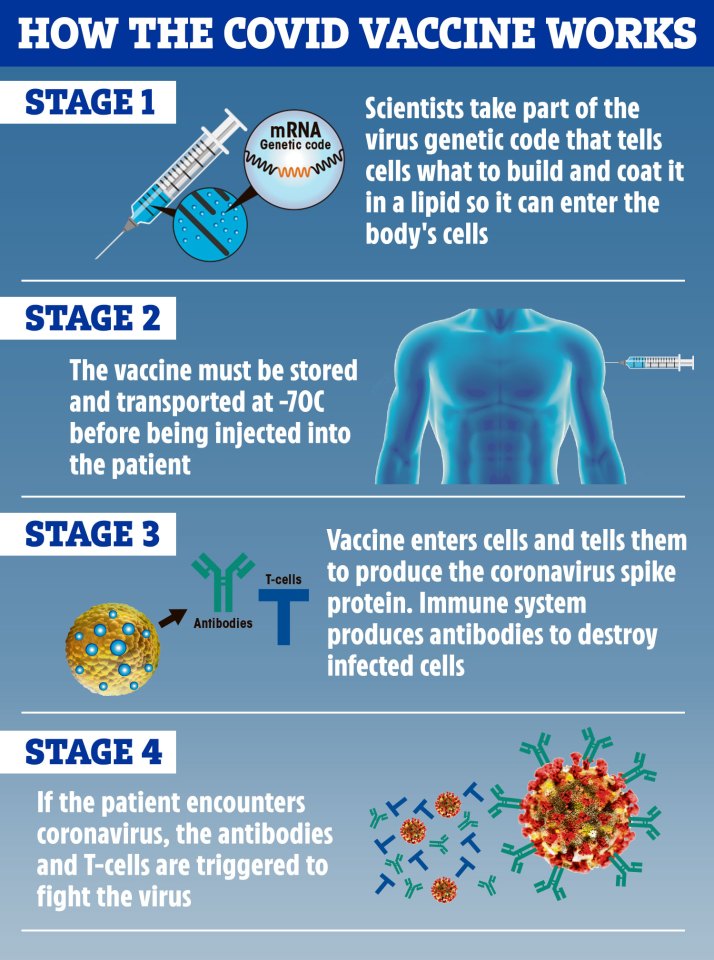 A person who is vaccinated could therefore have to stay at home for 14 days if they come into contact with someone who has Covid.

NHS Test and Trace get in touch anyone who has been in contact with a person who has tested positive.

It may be months before a vaccine removes the need to self-isolate, government sources told The Telegraph.

Up to 800,000 doses of the Pfizer jab will be ready to roll out next week after Britain became the first country to approve the vaccine.

The first doses of the vaccine, which is 95 per cent effective, arrived in the UK on Thursday.

But NHS and care home workers at the front of the queue could face having to self-isolate and stay at home in spite of being vaccinated.

A Government source told The Telegraph: “People who get vaccinated will have to stick to the same rules as everyone else because we don’t know if it stops people being carriers and passing the virus on to others.

“It will take a long time to work out what effect on transmission the vaccine will have.

“We will have to be at a point where a sizeable portion of the population has been vaccinated before we have that evidence.”

We don’t know if this vaccine will prevent transmission

The government wants to ramp up mass testing to replace self-isolating.

It’s hoped a scheme allowing contacts of people who have tested positive to be tested every day will be rolled out in January.

After seven days of negative results with rapid-result tests they would be all clear.

Boris Johnson hopes to have 500 million of the lateral flow tests by the middle of next month.

Jonathan Van-Tam, deputy chief medical officer, said on Wednesday: “We don’t know if this vaccine will prevent transmission, or any of [the vaccines].

VACCINE ON THE WAY

“We have to wait for the science to tell us if it will prevent transmission, though we are very hopeful on that point.

“We also have to be patient to see the real live effects on transmission and hospitalisations and deaths, and until we see that as scientists, we can’t then scope what the likely impact is going to be on bringing this pandemic to an early end.”

The doses will be shipped over from Belgium in the coming days, and will be here by the weekend, Pfizer bosses confirmed today.

It has to be stored at at -70C, which has made the logistics of transporting the jab a logistical nightmare. It can’t be kept at fridge temperatures, such as in GP surgeries, for more than five days.

In total the UK has ordered 40million doses, enough to give 20million Brits the required two doses, 21 days apart.

Care home residents, their carers and the over 80s will be front of the queue to get the first doses, the Joint Committee on Vaccination and Immunisation confirmed.

NHS staff will also get priority with 50 hospitals on standby to begin immunising staff.

Ben Osborn, Country Manager, Pfizer UK, said the Government will have the first batches of the virus “by the weekend”[/caption]

Can you get a free NHS Covid test if you must travel abroad?

SOLDIERS in the world’s second largest army must be banned from bonking each other’s wives, commanders have claimed in court. Top Brass…

SOLDIERS in the world’s second largest army must be banned from bonking each other’s wives, commanders have claimed in court. Top Brass…

Nancy Pelosi For Prosecution Of Lawmakers Who May Have Helped Capitol Siege. (FILE) Washington: Any members of the US Congress who helped…

Sleep apnoea: When is snoring a sign of the disruptive sleep disorder? Key symptoms

SOLDIERS in the world’s second largest army must be banned from bonking each other’s wives, commanders…

SOLDIERS in the world’s second largest army must be banned from bonking each other’s wives, commanders…

Nancy Pelosi For Prosecution Of Lawmakers Who May Have Helped Capitol Siege. (FILE) Washington: Any members…