DANIEL DUBOIS is ready to hold the weight and expectation of the nation on his giant shoulders.

Ahead of the British and Commonwealth champion’s defence against Joe Joyce on Saturday night, SunSport draped the wonderkid in an iconic Union Jack flag.

SunSport draped Dubois in the British flag after home heroes Bruno, Lewis and Haye did the same before world title wins[/caption]

And the Peacock Gym prodigy believes he is ready to burst on to the mainstream scene as a major force – just like the three home stars before him.

Dubois, 23, said: “It’s a proper heavy flag and I appreciate the meaning behind it.

“But I understand and appreciate the magnitude it brings and the responsibility it brings.

“The heavyweight division remains almost separate from the rest of the sport of boxing.

“If it’s thriving, then the sport is healthy. When there is a heavyweight dip then everyone suffers.

“Britain has had some legends and also had some quiet periods.

“Lennox, Frank and David did amazing things and the sport thrived on the back of them in this country. 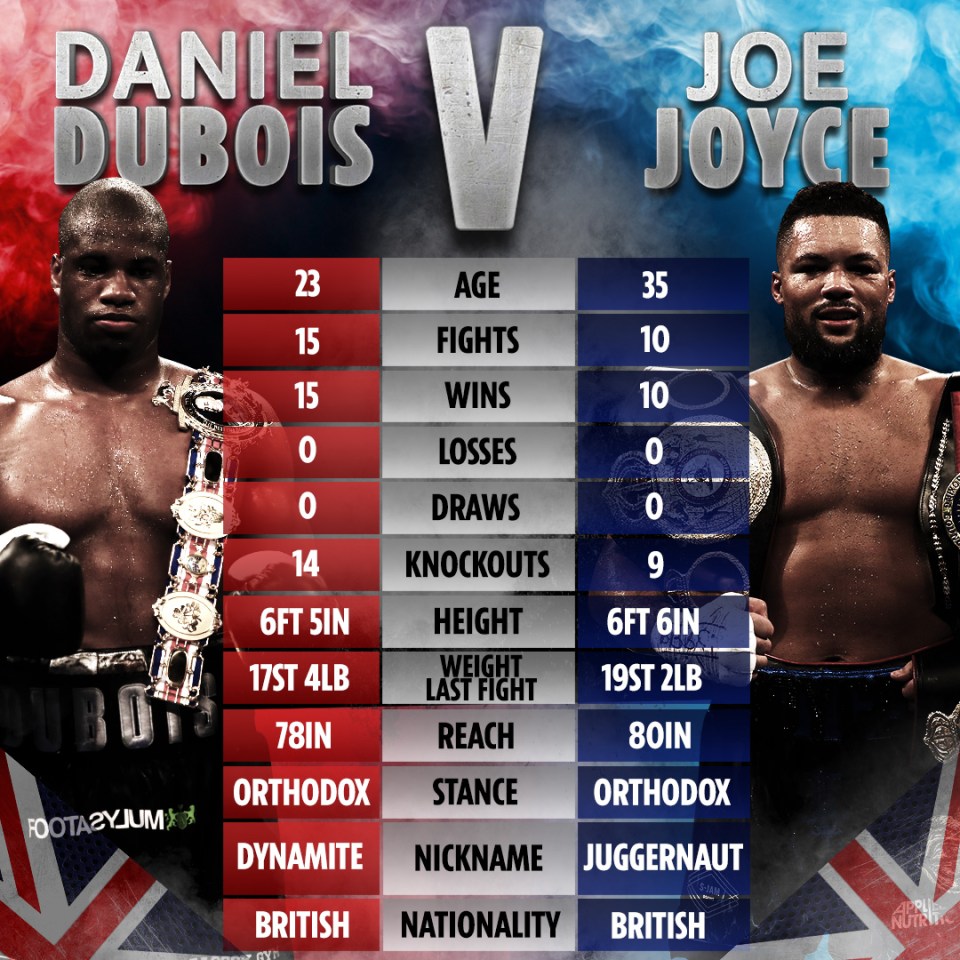 “I want to continue that, I want to carry the sport forward and be the face of British boxing, starting on Saturday night.

“I feel like the country is starting to warm to me. I’m going to try to entertain them and make sure at this time, which the whole world is going through, that a great fight can happen.

“Everyone can sit back and watch… don’t blink, it’s going to be amazing.”

Dubois is one of 11 siblings and sister Caroline, 19, who won Olympic youth gold, is expected to become one of the UK’s finest ever fighters – of any sex.

Little brothers Prince, 16, and Solomon, eight, are also in training, making the most of the gyms they have just built inside and in the garden of their new Essex home.

The fresh start is a far cry from the days Daniel and his dad shared racing around London markets like fictional Trotter icons Derek and Rodney.

“I loved those days,” the retired fly pitcher said. “They were probably the best days of my life.

“It was exciting, we were never sure how the day would go.

“Dad had a way of making people come and buy, it was like magic. He was a master at his stuff and I’m trying to do the same with boxing.

“We probably were a bit like Del and Rodney actually – or maybe I was just like any other labourer. But I loved going along and seeing how it worked.”

Joyce, 35, and a teenage Dubois were once GB team-mates in Sheffield, helping Anthony Joshua prepare for London 2012.

But the healthy rivalry went out the window in February at the launch of this delayed bout.

Dubois snapped at Joyce’s mum Marvel at the press conference and said the fact she had 93 per cent blindness would spare her from seeing him beat up her son.

Softly-spoken Dubois has refused to apologise ahead of tonight’s showdown at London’s Church House, where the European crown is also up for grabs.

He insisted: “Why would you bring your mum to a press conference? It’s not personal but they are enemies until after the fight.”

THE price of cryptocurrency Shiba Inu has skyrocketed in recent days – so, what is it and who’s its founder, Ryoshi? The…

A HOME expert has divided opinion by sharing three tell-tale signs in a home that “show you grew up poor”. TikTok user…

NEVER Mind The Buzzcocks presenter Greg Davies left the panel open-mouthed after leaving little to the imagination in a skintight leotard. In…