THE death of Iran’s top nuclear scientist Mohsen Fakhrizadeh has renewed fears of a revenge attack on the USA.

Fakhrizadeh was injured after gunmen fired at his sedan in an ambush by five gunman near Tehran on Friday; the nuclear mastermind died from his catastrophic wounds later in hospital and his funeral was held today.

He headed Iran’s AMAD program, which Israel and the West have alleged was a military operation looking at the feasibility of building a nuclear weapon.

Israel has been suspected of killing Iranian scientists a decade ago amid earlier tensions over Tehran’s nuclear program and this attack also appeared to be a carefully planned, military-style ambush.

Now, there are fears Iran will hit out at the United States, which is Israel’s closest ally in the region, after Fakhrizadeh’s widow spoke out on state TV and officials there demand revenge for his death.

In Tehran, protesters burned images of Trump and Biden today, after the president-elect indicated that his administration will consider reentering Tehran’s nuclear deal with world powers.

Enraged hard-liners also criticized Iran’s foreign minister who helped negotiate the nuclear deal, showing the challenge ahead of Tehran if officials chose to come back the accord.

Earlier this year, a US drone strike killed a top Iranian general Qasem Soleimani, a move which has been touted by outgoing President Donald Trump.

An Iranian lawmaker suggested throwing out UN nuclear inspectors in response to the killing of Gen Soleimani.

Speaking earlier Saturday, President Hassan Rouhani blamed Israel for killing the country’s top scientist and said Iran will respond to “the assassination of Martyr Fakhrizadeh in a proper time.”

“The Iranian nation is smarter than falling into the trap of the Zionists. They are thinking to create chaos,” Rouhani said, while Fakhrizadeh’s unnamed widow said “he wanted to get martyred and his wish came true” on state TV.

Rouhani and Khamenei said that Fakhrizadeh’s death would not stop the nuclear program as Iran’s civilian atomic program has continued its experiments.

Khamenei made his pledge in a statement on his official website after Iranian President Hassan Rouhani appeared on TV to blame Israel for the killing.

He did not elaborate.

He added: “This unparallelled scientist gave his dear and valuable life to God because of his great and lasting scientific efforts, and the high prize of martyrdom is his divine reward.”

The scene of the terror attack on top Iranian nuclear scientist Mohsen Fakhrizadeh, in the city of Damavand, northern of the capital city of Tehran, Iran, 27 November 2020[/caption]

Meanwhile, it emerged today US aircraft carrier USS Nimitz was deployed to the Gulf this week just days before the assassination.

US Navy officials have however insisted that the deployment of the 101,000 ton warship was not related to any “specific threats”.

Rouhani had earlier accused Iran’s arch-foe Israel of acting as a “mercenary” for the US and seeking to create chaos by carrying out the assassination.

He vowed that Iran will not “leave this criminal act unanswered” and will retaliate “in due time”.

A statement by Iran’s armed forces said “the medical team did not succeed in reviving him, and a few minutes ago, this manager and scientist achieved the high status of martyrdom after years of effort and struggle.”

It comes amid ongoing tensions in the Middle East between Iran and the US — along with its allies Israel and Saudi Arabia — over the Islamic Republic’s quest for nuclear weapons.

Iran has vowed to “strike like thunder” on whoever carried out the attack.

The BBC reported that Major General Hossein Salami said: “Assassination of nuclear scientists is the most obvious violation of the global hegemony to prevent our access to modern sciences.”

“Iran calls on international community — and especially EU — to end their shameful double standards & condemn this act of state terror.”

A spokesperson for the Israeli military told The Guardian: “We don’t comment on reports in the foreign media.”

No one has claimed responsibility for the assassination yet. 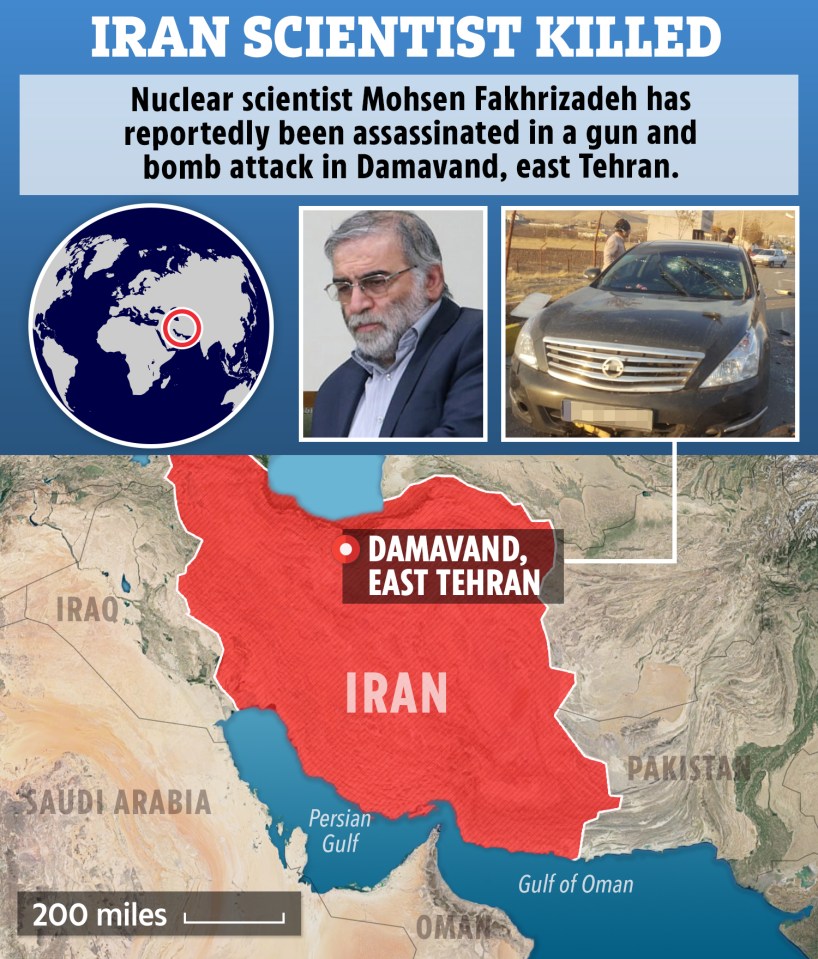 The death of Fakhrizadeh comes just days after it was reported Israel’s Defence Forces had been told to brace for a US military strike against Iran before Trump leaves office.

And the New York Times reported Trump had discussed the possibility of a final Iran strike before he left the White House with senior security officials.

As Biden prepares to take the reins in January, Israeli officials were today warned of a “very sensitive period” with Trump unwilling, until this week, to concede defeat.

It comes amid fears that a rash move in the Middle East by Trump in the final weeks of his presidency could create a geopolitical headache for the President-elect.

Biden has been open about his desire to re-engage diplomatically with Iran, and vowed to revive the 2015 Nuclear Deal in a sharp reversal of the Trump administration’s ‘maximum pressure’ policy.

Meanwhile, the Israeli Defence Force is reported to have been on high alert in recent weeks in the event of a US military strike.

Axios reports that the IDF have been instructed to prepare for a possible strike against Iran by the Israeli government, which did not make the order based on intelligence that Trump will issue the strike.

The officials say Israel’s government has warned the IDF to prepare for possible retaliation against the country by Iran directly, or by proxies in Syria, Gaza and Lebanon.

Fakhrizadeh was often compared with Robert Oppenheimer, the American physicist who oversaw the effort to build the atomic bomb in the 1940s, and was dubbed the “nuclear Qasem Soleimani.”

Soleimani, Iran’s military commander, was considered to be one of the most powerful and prolific figures in Middle Eastern war games before he was assassinated in a US air strike earlier this year.

He was named in UN sanctions resolutions over fears he was secretly crafting nuclear weapons.

In 2007, leaked documents revealed Fakhrizadeh was the chairman of the Field for the Expansion of Deployment of Advanced Technology (FEDAT) – the name for the organisation behind Iran’s nuclear development program, say US officials.

He was also named as the organisation’s boss by Israel’s Prime Minister Benjamin Netanyahu at a press conference back in 2018.

Iran’s relationship with the rest of the world has been strained over fears the military power is secretly developing nuclear weapons.

For some time, Fakhrizadeh had disappeared from the Iranian military circles before reappearing in 2012.

Back in January, fears were heightened of a military confrontation between the US and Iran following the assassination of Soleimani.

And today, a historic meeting between Saudi Arabia and Israel’s leaders – both common enemies of Iran – was held.

The meeting of the two significant powers, who previously had shunned all formal diplomatic relations, sent a strong message to Iran of the strength of their opposition.

Saudi Crown Prince Mohammed bin Salman and Israeili Prime Minister Netanyahu were cheered on by outgoing US President Donald Trump, who championed a “maximum pressure” campaign against the country.

The US and Iran have seen relations plunge to new lows under the Trump administration following a string of clashes.

Earlier this week, the President sent B-52 nuclear capable bombers to the Middle East in an apparent warning to Iran.

It is very, very important to create the axis which isolates Iran.

Lieutenant General Greg Guillot, commander of the US military’s 9th Air Force, said: “The ability to quickly move forces into, out of and around the theater to seize, retain and exploit the initiative is key to deterring potential aggression.”

He added: “These missions help bomber aircrews gain familiarity with the region’s airspace and command and control functions.

“[It allows] them to integrate with the theater’s US and partner air assets, increasing the combined force’s overall readiness.”

Most read in US News

Meanwhile, the family of Fakhrizadeh gathered at a mosque in central Tehran for his funeral service on Saturday, a website associated with Iranian state TV reported.

The scientist’s body lay in a flag-draped, open coffin, his eyes closed, as Ebrahim Raisi, Iran’s chief justice and a leading Shiite cleric, offered prayers over his body. 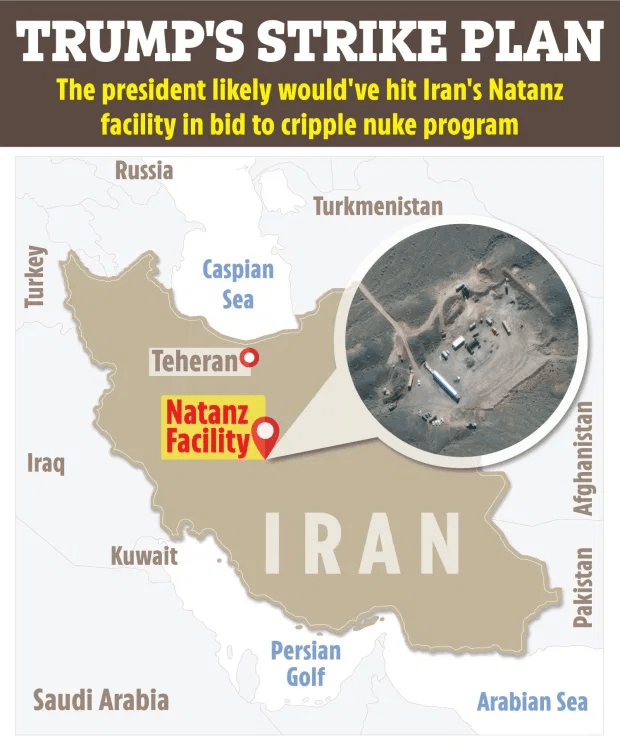 Lift your fortunes with funds aiming for a big 2021 rebound

On Wednesday evening, the Duchess of Cornwall delivered a speech on sexual violence against women in…