By Francesca Washtell For The Daily Mail

BT is considering selling a stake in its broadband infrastructure arm Openreach.

Chief executive Philip Jansen said a deal could be on the table next year once a regulatory review into full-fibre broadband networks finishes.

Speaking at an industry conference, the telecom group’s boss said: ‘Would I be open-minded about looking at a minority interest on it, moving that on to somebody else? Possibly. I can’t see us doing that until well after we’ve agreed the regulatory framework, which isn’t until March, April next year.’ 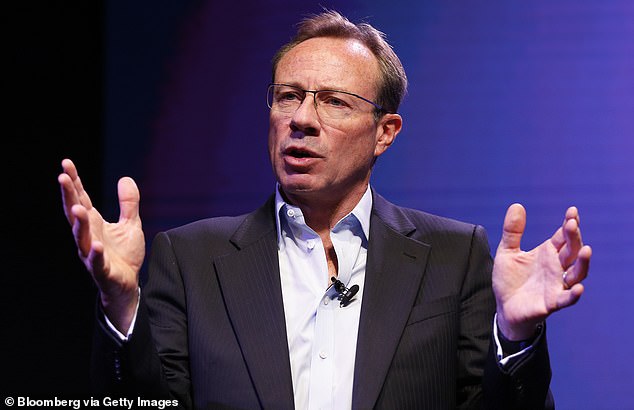 Jansen’s comments mark the first time BT has publicly admitted it could look to sell a stake in Openreach.

It previously downplayed media reports it was in talks for a deal that could value the broadband division, which is responsible for rolling out full-fibre broadband across the UK, at £20billion.

This valuation would dwarf BT, which is legally separate from Openreach and is worth just £12.1billion.

Telecoms regulator Ofcom is reviewing how much BT should be able to make on its huge investment into broadband infrastructure.

Jansen has committed £12billion to rolling out superfast fibre broadband to 20m homes across the country – and has even suspended the company’s dividend to fund it.

Analysts have speculated that private equity groups could be interested in buying into Openreach – KKR bought an £890million holding in Italy’s Telecom Italia over the summer.

A City source said: ‘It’s not the biggest surprise to the market that this is being considered.

‘Let’s face it, BT is fighting on many fronts – it works in broadband, mobile, broadcast, it has a big pension deficit and plenty of debt. So you could understand why it might look to find a way of bringing in some cash.’

With frost times changing each year, forecasting a nationwide frost date is nearly impossible. Tom added: “As a child growing up in…

LITTLE Mix’s Leigh-Anne Pinnock looked sensational as she brushed off the Jesy Nelson feud to throw an epic birthday party. The new…

How four jabs of sterile water can ease pain during labour

SINGER Jimmie Allen and wife Alexis Gale have welcomed a baby girl into the world. The…

Les Dennis health: 'I was in denial' – the star's major health scare – symptoms to spot