Manchester City and their opponents in the Champions League final will receive up to 4,000 tickets each for the match to be played in Turkey.

UEFA and Turkish authorities are believed to be drawing up plans to accommodate 25,000 spectators at the Ataturk Stadium for the match on May 29. If they are approved, the stadium in Istanbul will host one-third of its 76,000-capacity.

But staging the game will make a mockery of Britain’s efforts to stamp out Covid, according to an MP and public health experts, who say English fans shouldn’t be allowed to attend.

Turkey currently has a coronavirus infection rate 12 times higher than Britain’s, with 370 new cases per million people announced yesterday, compared to 30. There were 31,200 more positive tests confirmed on Tuesday alongside just 2,000 in the UK.

City eased their way to their first Champions League final with a stunning 2-0 win over Paris Saint-Germain at the Etihad Stadium, last night, to go with their 2-1 win in France.

Chelsea will play Spanish giants Real Madrid tonight in hope of clinching the other place in the final.

At least 4,000 Brits will be given the chance to travel with City if the plans are given the green light, and the UK contingent could be upped to 8,000 if Chelsea win at Stamford Bridge tonight. 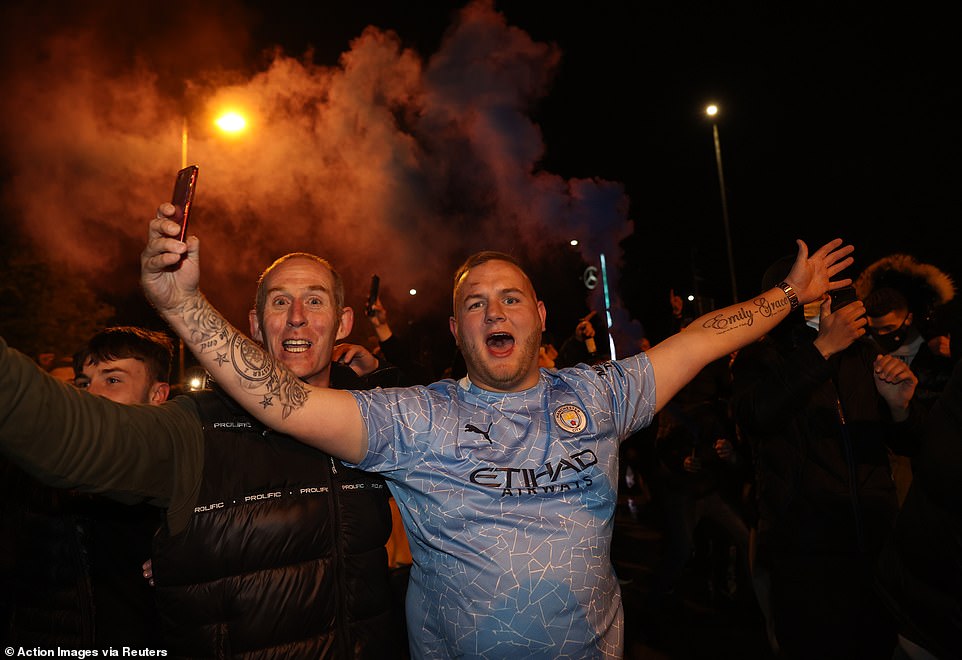 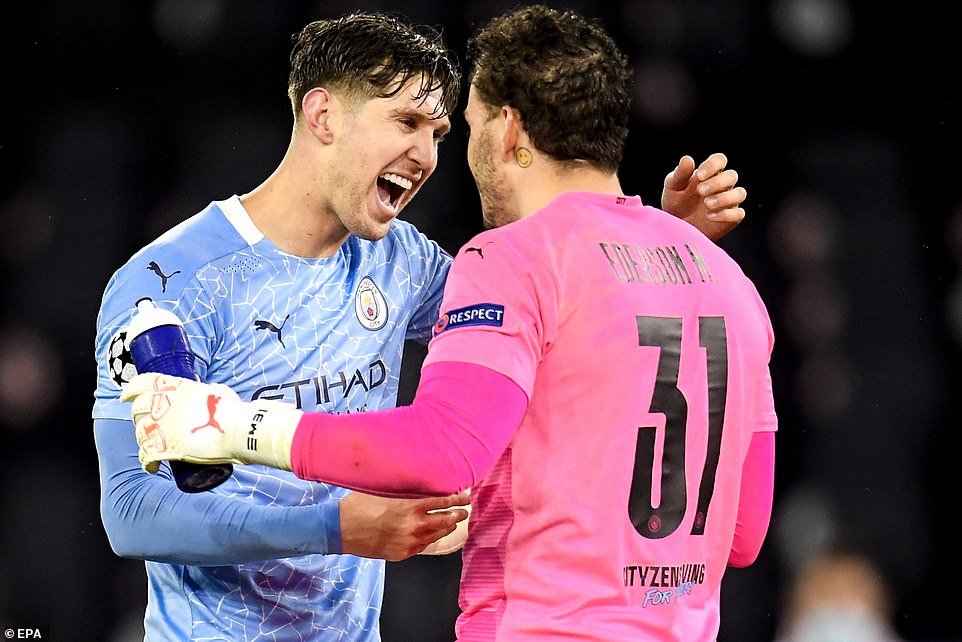 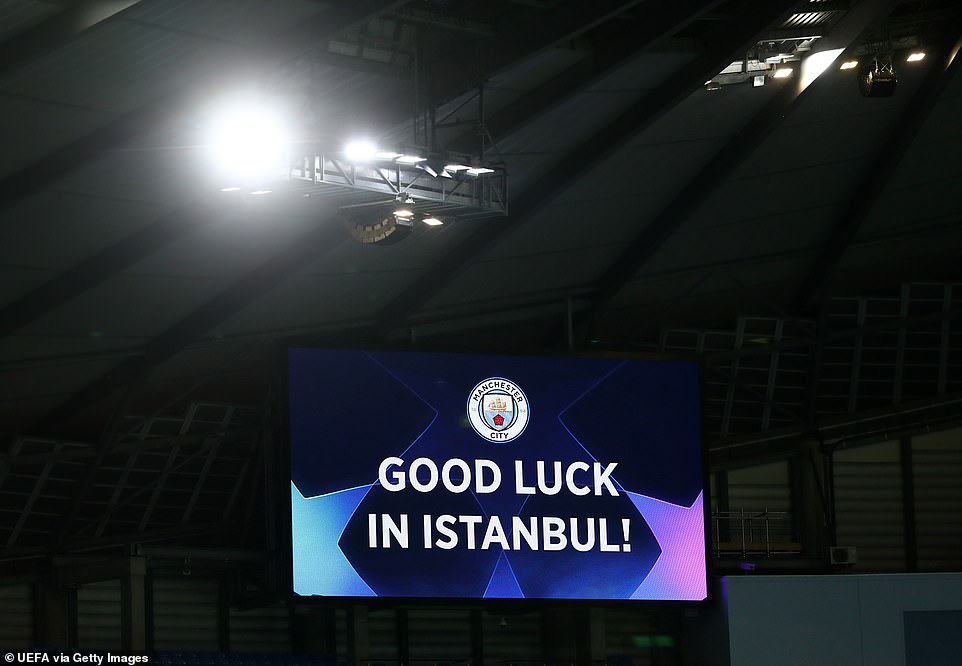 City are on their way to Istanbul, where the Champions League final will be played on May 29 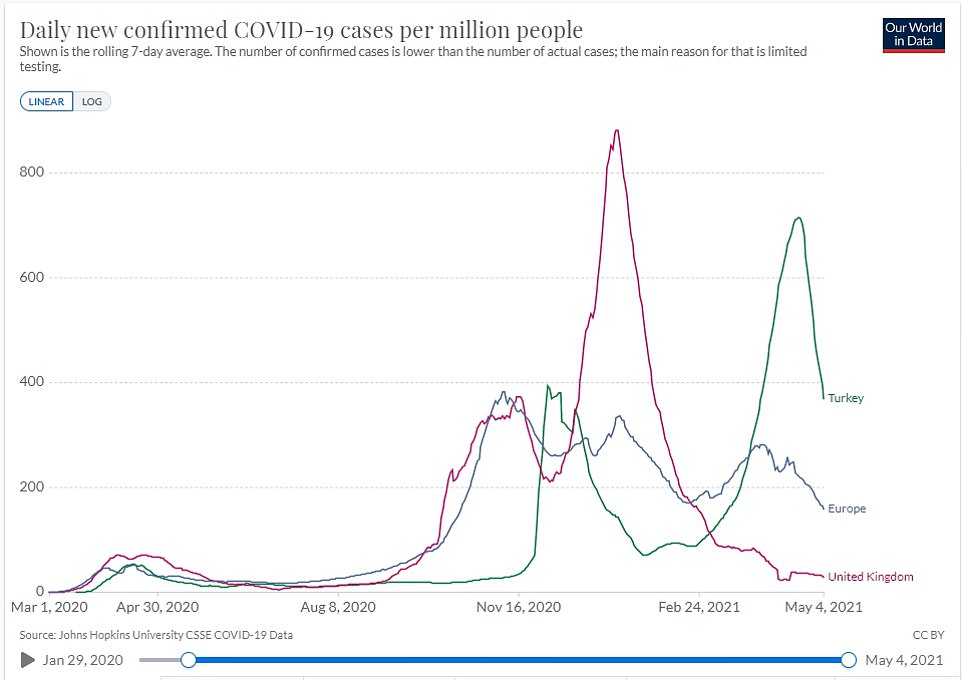 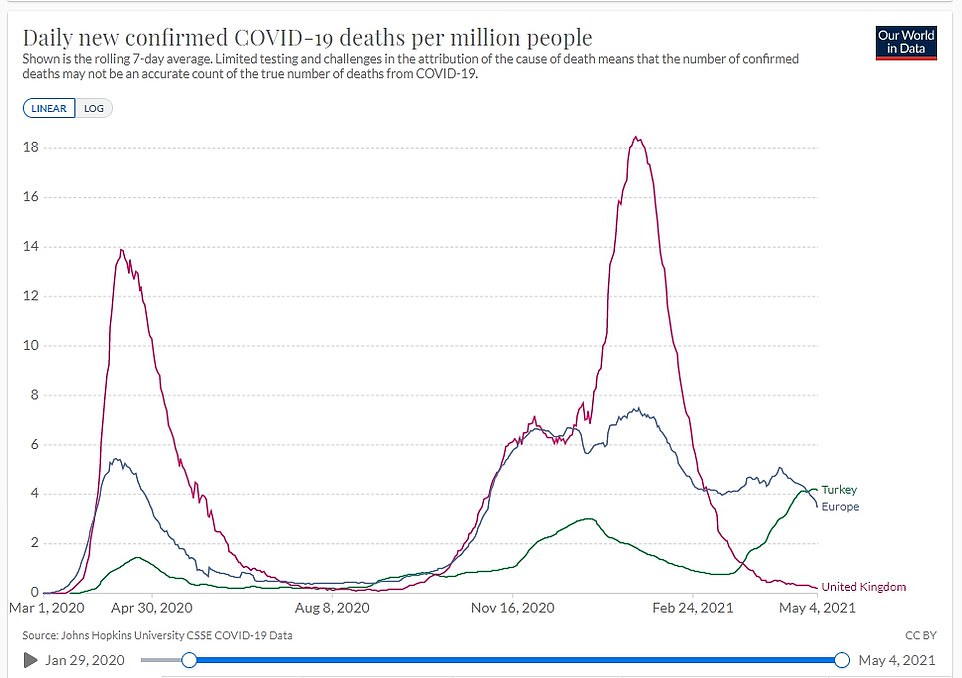 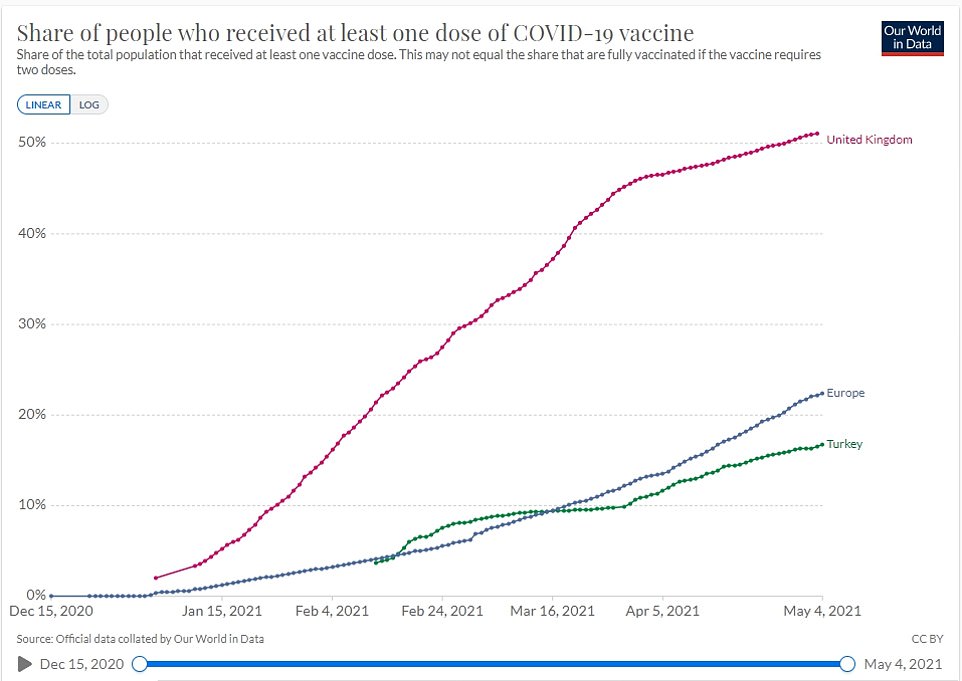 Within hours of the match finishing, the club asked supporters to express their interest in attending the final at the Ataturk Stadium.

Manchester City and their opponents now look set to receive 4,000 tickets each for the final, according to The Times.

Sources have told the paper, the clubs may be permitted to sell even more tickets than their allocation if they organise the travel via official packages.

However, the final arrangements will be influenced by the UK government’s travel restrictions, expected to be announced on Friday, which will determine whether fans would have to quarantine on their return.

Turkey is currently in a ‘full lockdown’ until May 17. It has suffered a devastating spike of coronavirus, with a peak of 60,000 cases and 300 deaths a day in April and rates of infection remain thirteen times higher than the UK.

In addition, scientists say that limited capacity to analyse the virus in Turkey means there is little reliable information about the variants that may be circulating there.

Vaccine mister Nadhim Zahawi refused to be drawn on the prospect of English fans travelling to Turkey for the match when questioned on BBC Breakfast today.

But Clive Efford, MP for Eltham, was clear. ‘To allow English fans to travel to and from Turkey would make a mockery of all the measures we have taken over recent months during lockdown,’ he said.

‘It is a risk not worth taking at this stage, particularly because we are concerned about new variants emerging and whether vaccines are effective against them,’ added, Efford, who is a qualified FA coach and life-long Millwall fan. ‘And if it is two English clubs in the final it makes sense to move it from Istanbul.’ 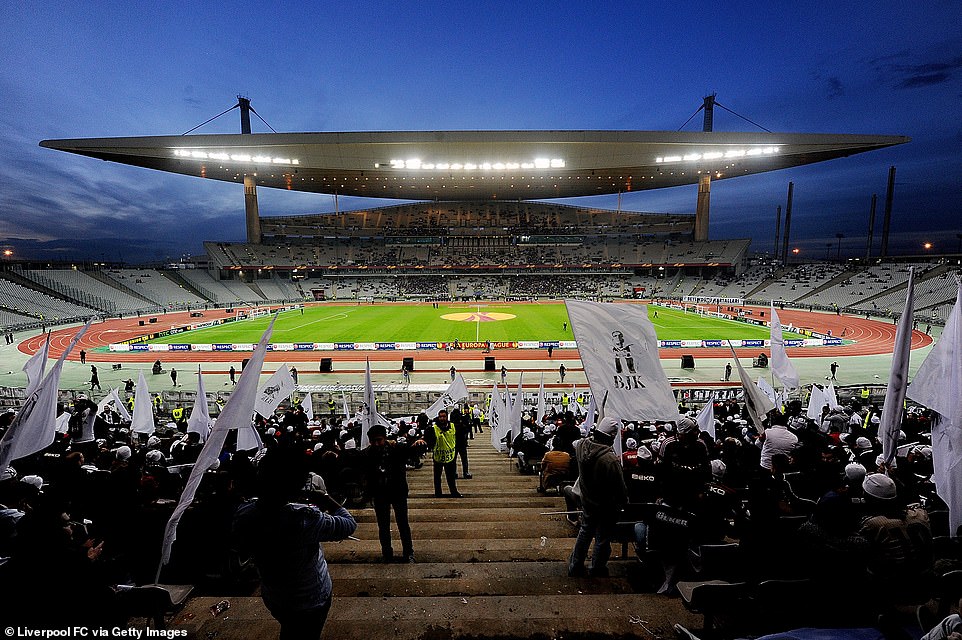 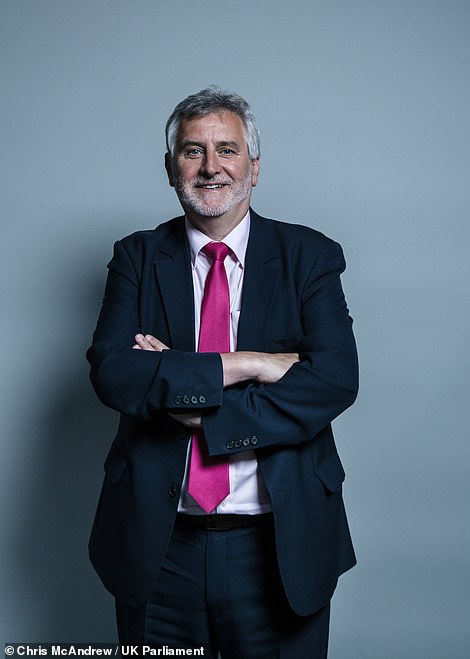 Turkish premier President Tayyip Erdogan ordered a ‘full lockdown’ of the country starting on Thursday last week, which will last until May 17, in an attempt to drive the level of infection down, with schools closed and travel restricted.

But there is still an exemption for international tourists as the countries tries to hold on to a crucial source of revenue.

Turkey will be desperate to stage the game with fans to show the world that it is open for business, after coronavirus wrecked the tourist season last summer and politicians in the country fear European destinations will steal a march as beaches, bars and restaurants reopen.

The foreign cash that tourists spend is critical to offset Turkey’s heavy foreign debt, but revenues plunged 65% last year when the pandemic first hit, according to Reuters.

Turkey is hoping to host 30 million foreigners this year, twice as many as last, if the lockdown succeeds in lowering daily covid cases to below 5,000 from near 30,000 in recent days. 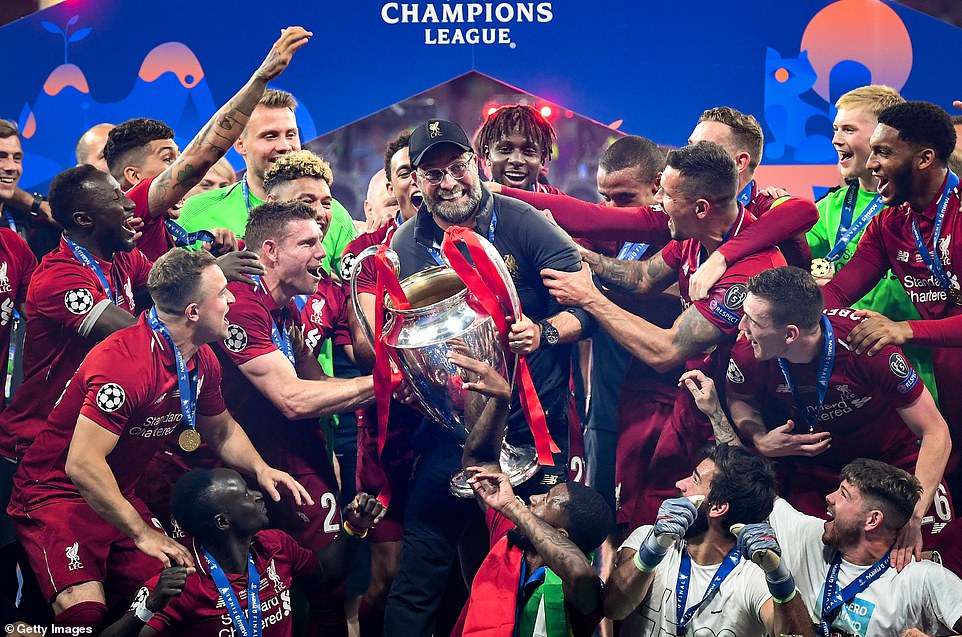 Fans could be issued with free Covid tests to take with them to Istanbul, under plans to help make foreign travel a reality.

Whitehall sources told the Mail that fast-turnaround tests would be made available free of charge to people travelling abroad to cut the hassle and expense of getting a pre-return test in a foreign country.

However, it is expected that supporters returning from Turkey – along with other holiday makers – will still have to pay for a gold-standard PCR test when they get home, at a cost of at least £50 each.

The government is expected to detail its plans for lifting the blanket ban on travel on Friday.

‘The decision should be based on what is safe and in everyone’s interests,’ added the Labour politician. ‘[Turkey’s situation] cannot be a factor. It is the risk we have to consider.

‘There should be no travelling fans from the UK. It is a tragedy, but that is the situation we are in.

‘It absolutely makes sense that if it is not going to be the huge spectacle it has always been then it should be played out at Wembley and Istanbul should be offered the final at a later date.’

Last year’s final was also scheduled for the Ataturk Stadium, before the latter stages of the blue riband competition were moved to Spain, where it was played in front of empty stands.

Liberal Democrat Layla Moran MP, chair of the All Party Parliamentary Group on Coronavirus said it would be ‘dangerous’ for fans to travel to Turkey now.

‘In light of the very high number of cases in Turkey, it would be dangerous to encourage fans to travel there to attend the Champions League final,’ she said.

‘In the current climate, where it is possible, games should be hosted in teams’ home nations. It is reckless for players and fans to have to travel abroad unnecessarily.

‘International journeys increase the risk of new Covid-19 variants being imported, which is why the All-Party Parliamentary Group on Coronavirus has this week released a report discouraging all non-essential overseas travel.’

Public health experts agree that the game in Turkey poses an unnecessary risk. 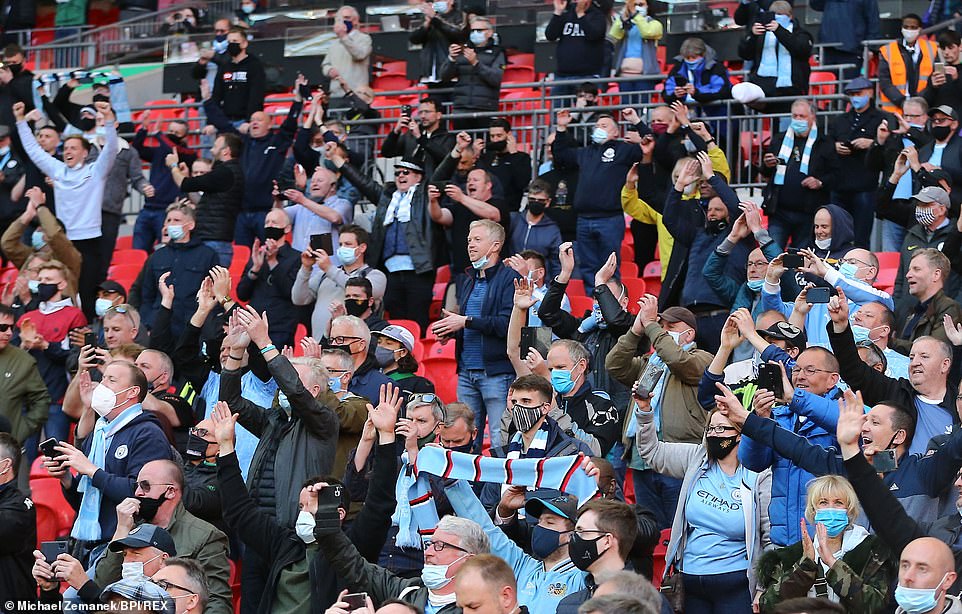 City fans, fresh from their club’s success in the Carabao Cup, are eyeing a trip to Turkey

‘It’s crazy and unnecessary,’ Professor Keith Neal, an expert in public health at the University of Nottingham previously told Sportsmail.

‘Turkey is a covid hot zone and it is likely to remain so in May.

‘People will be travelling in crowded planes, passing through crowded airports and spending time in bars and restaurants. It is too risky.

Professor Paul Hunter, an infectious disease expert at the University of Norwich also told Sportsmail the risks of playing in Istanbul were too high. 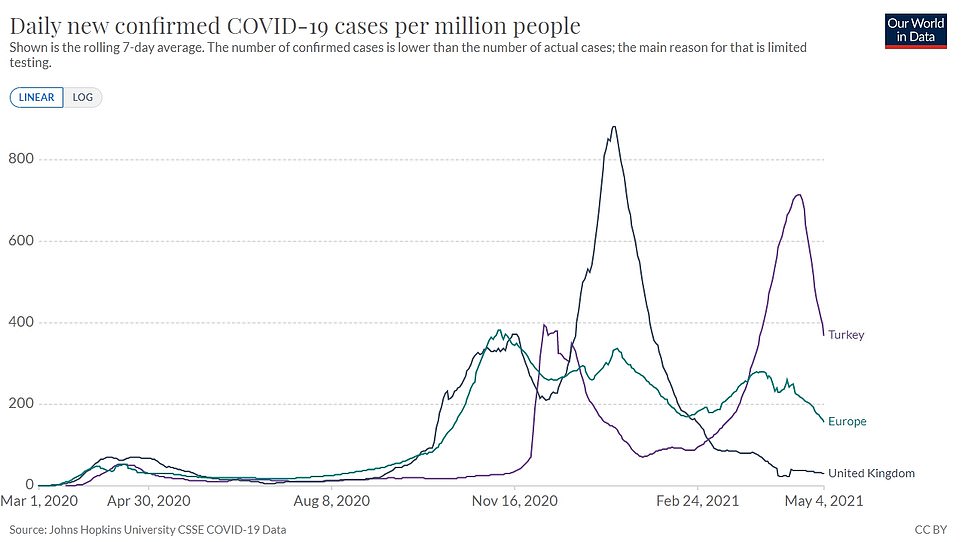 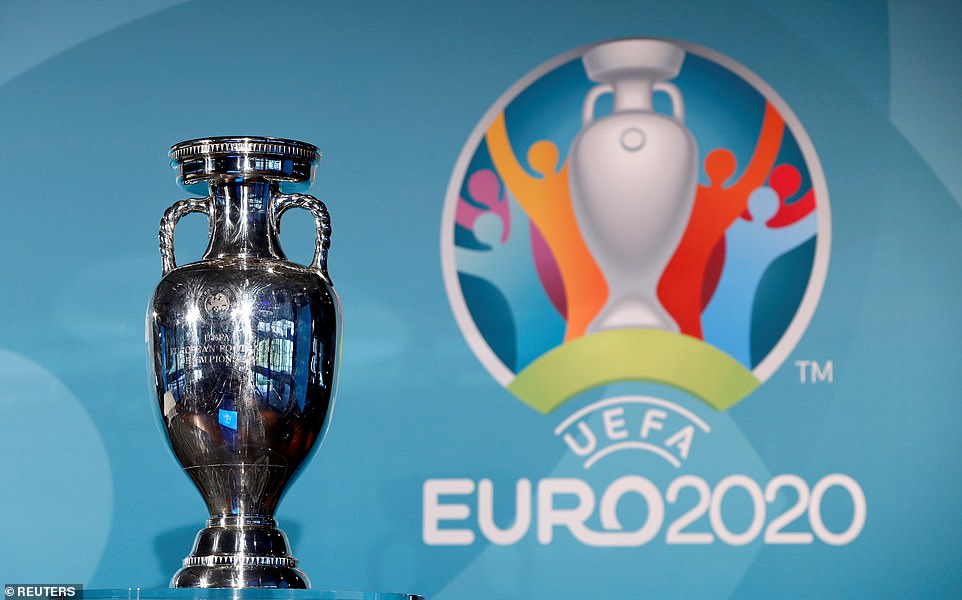 ‘So, from a global perspective holding big international events where people will probably not adhere to the guidance because they are overseas and there will probably be a lot of alcohol around does not seem a good idea,’ he said.

‘For me, I would not consider it a worthwhile risk. Even though cases are dropping it is still going to be pretty high. There is no way Turkey is going to get it down to anywhere near the UK by then.’

Turkey’s lockdown is due to end on May 17, which is also the earliest date that UK residents will be allowed to travel abroad, under the government’s roadmap out of lockdown.

Currently all overseas holidays are banned for UK residents.

However, government ministers have spoken positively about travel restrictions being eased in May with the development of the NHS app, which would act as a covid passport to demonstrate a person has been vaccinated against the virus, or has received a negative test. 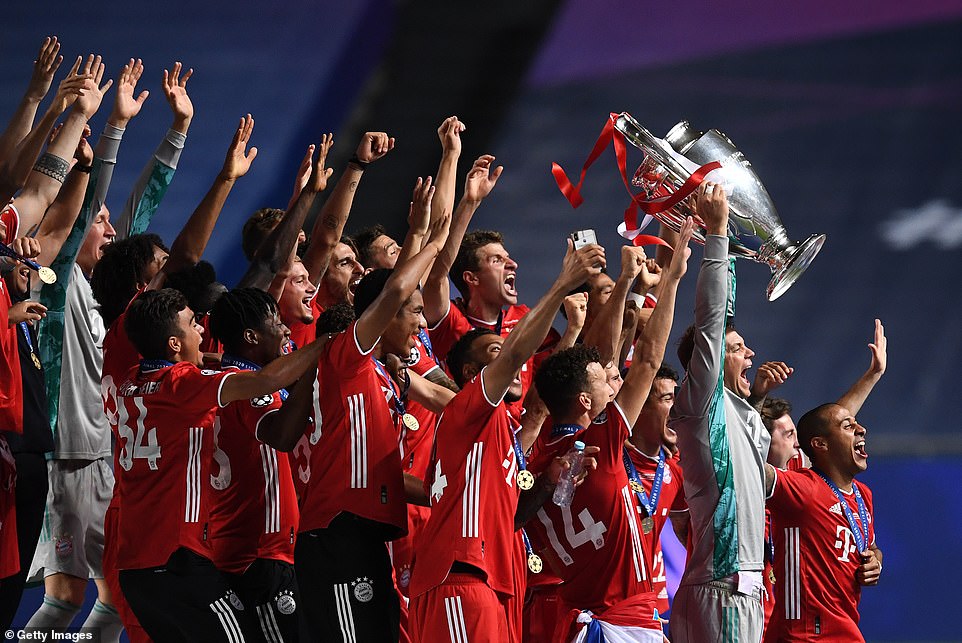 When asked on BBC Breakfast today about travel to Istanbul to watch Manchester City, or Chelsea if they go through, the government’s vaccine minister, Nadhim Zahawi, would not be drawn.

‘Later this week the Transport Secretary [Grant Shapps] will be stating what he has already announced which is the traffic light system,’ he said. ‘We have 40 countries on the red list… There will be the amber list and green list. Grant Shapps will be setting this out later this week.’

Under the plans, countries will be designated a colour, red, amber, or green, which will determine the quarantine requirements on the return to the UK.

UEFA and the Polish authorities have finalised plans to allow 9,500 fans to attend the Europa League final in Gdansk, next month.

The showpiece, due to take place at the 41,000-seat Gdansk Stadium on May 26, will be played in front of a quarter-full stadium with 2,000 tickets allocated to each club.

It raises the prospect of Manchester United and Arsenal playing out a European final in front of supporters, provided both teams can emerge from tough semi-final ties.

Experts spoken to by Sportsmail are less concerned about the health risks posed by playing in Poland in front of fans, compared to Turkey.

Poland has less than half the number of new Covid infections each day compared to Turkey, at 151 per million compared to 370 per million people, as reported by John Hopkins University. This is a similar number to Spain. Poland has also administered a first dose of covid vaccine to 24 per cent of its population, Spain has delivered one dose to 26%, compared to 17% in Turkey.

‘Red countries’ would require returning travellers to quarantine in a government-approved hotel, while an amber rating would mean people have to self-isolate at home for 10 days.

Dr Julian Tang, a virologist and Honorary Associate Professor in the Department of Respiratory Sciences at the University of Leicester, told Sportsmail there were risks associated with the match, which were heightened by the fact that Turkey does not extensively sequence the virus, so the number and type of variants in the country is not known.

Added to that he said 80 per cent of people do not self-isolate properly, when they return to the UK, which creates the risk of spreading the disease.

However, he said football fans will make up a small part of the total travel taking place to and from the UK after May 17.

Flights are currently operating between the UK and Turkey. All passengers aged six years and above are required to show a negative PCR test taken within 72 hours before departure. And there is currently no requirement to self-isolate once in Turkey.

UEFA told The Athletic last week that the Turkish lockdown would not affect the final.

‘The Champions League final will take place in Istanbul on May 29 with a limited number of spectators and we are assured that the temporary lockdown which is in force until May 17 should not have any impact on the match.

‘UEFA will continue to work closely with the Turkish Football Federation and the local and national authorities to stage the match safely.’ 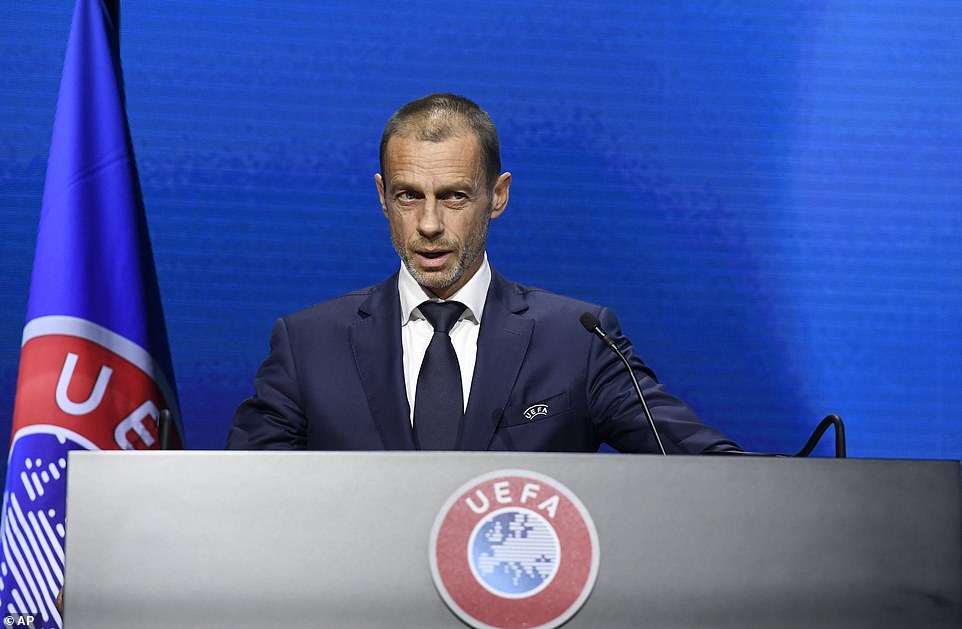 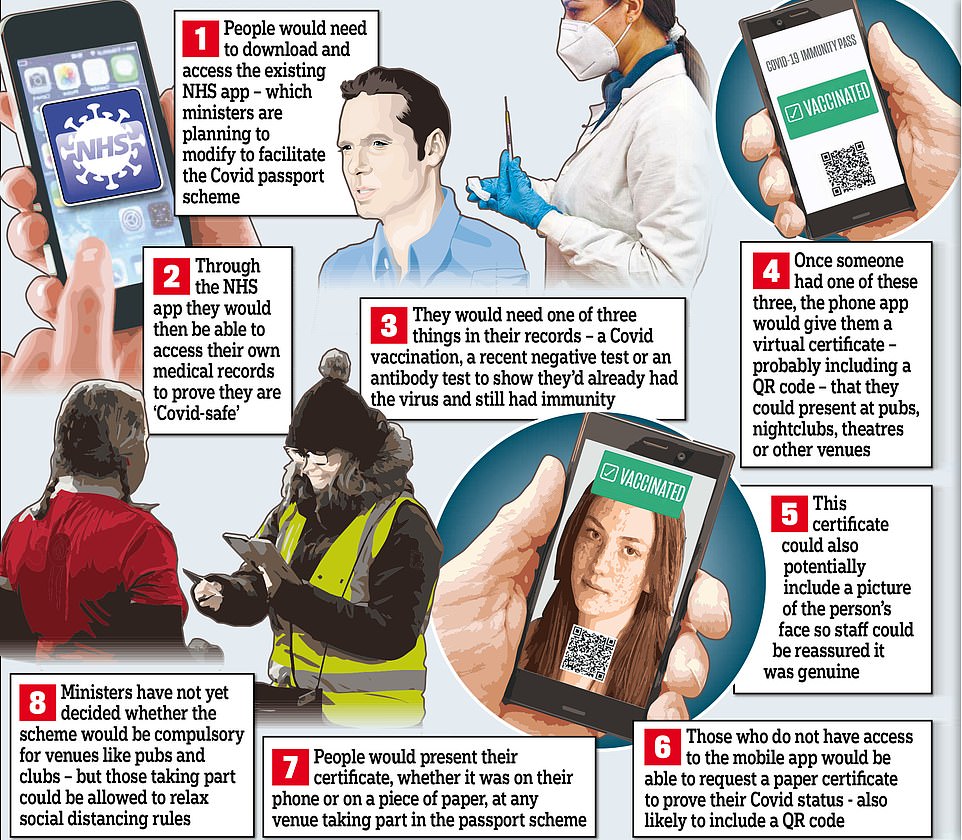 Chelsea verdict: Saul and Ross Barkley fail to take their chance as Blues stand-ins give regulars nothing to worry about

POLICE admitted Brian Laundrie was probably already dead when officers confused him with his mother the night he vanished. On the night…