EXPERTS fear Thanksgiving will be the “mother of all superspreader events” as the CDC warned that the vast majority of reported Covid-19 infections are missed.

At least 53 million people had Covid-19 in the US by September but the agency now estimates that almost eight coronavirus infections weren’t reported for every one caught.

Medics treat a Covid-19 patient in the ICU at the United Memorial Medical Center in Houston, TX, on November 10[/caption] 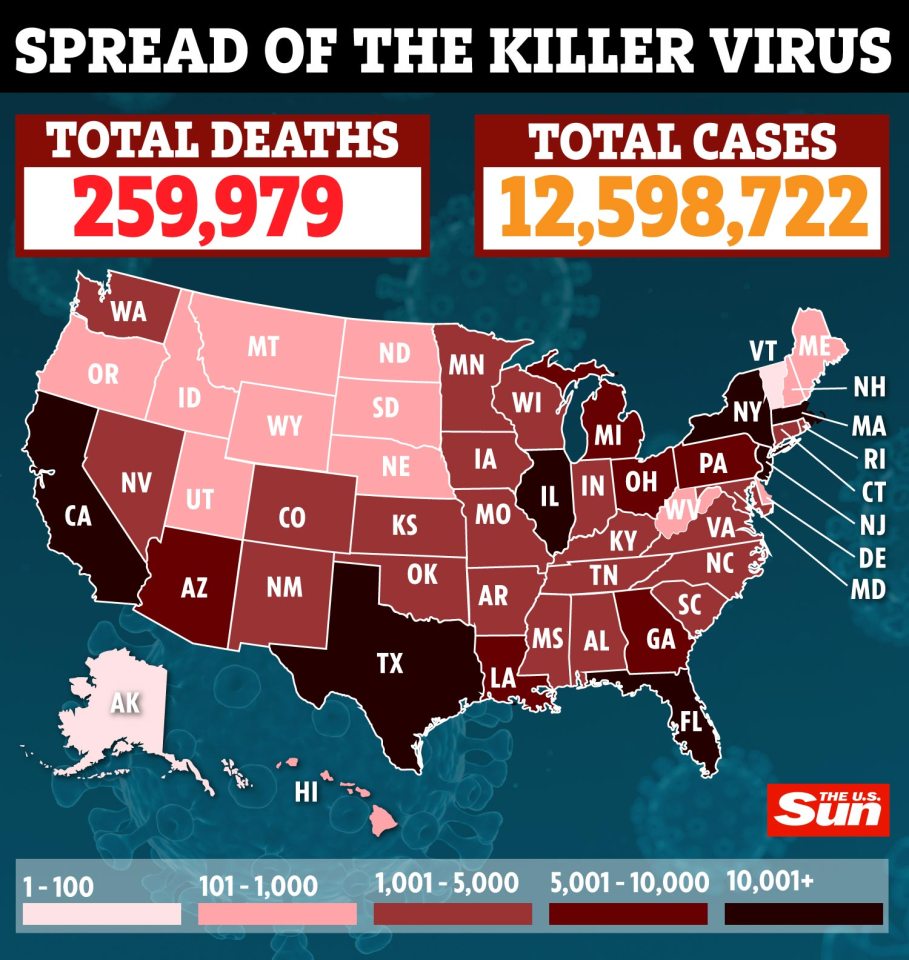 “One of the ways we think the Midwest was seeded with virus during the summer was with the Sturgis, South Dakota, motorcycle rally where people were infected and then dispersed out through the Midwest.”

News of a Thanksgiving Covid-19 surge comes as:

“People leaving from every airport in the United States, and carrying virus with them,” he said, citing the Sturgis motorcycle rally in South Dakota this summer as an example.

His comments come as AAA forecasts estimate that 6.3 million people will have flown in the days before and after Thanksgiving and officials urge people to keep celebrations small and at home.

The daily death toll on Wednesday surged to 2,284 in the USA – the highest level since May 7, according to The Covid Tracking Project as a deadly second wave sweeps the country.

This is the second day in a row that more than 2,000 Americans have died; hospitalizations also reached single day record of 89,954 with a seven-day average of 84,840.

This disturbing news emerged after the CDC revealed that a whopping 53 million people had contracted the virus two months ago – just under eight times the confirmed cases reported at the time.

Their more recent calculation is supposed to paint a more accurate picture of how many people actually contracted the deadly virus since the pandemic hit the USA.

Of the 53 million estimated infections, around 45 million were sick at some point while about 2.4 million patients were hospitalized, according to the agency.

Healthcare personnel prepare to discharge a patient who had been quarantining after a possible exposure to the coronavirus in Lakin, Kansas on November 19[/caption]

This was the CDC tally as of 4 pm ET on November 24 versus its previous report a day earlier.

The news comes as America has suffered its deadliest day since May with more than 2,100 daily coronavirus deaths as fears of a Thanksgiving “timebomb” spiral.

Across the US, hospitals have been overwhelmed with Covid patients – with at least one medical center turning a parking lot into treatment areas.

The vast majority of Covid cases went undetected, according to the CDC[/caption]

Officials have pleaded with families to keep holiday gatherings small as the contagion escalates around the country.

The deadliest day in more than six months was still short of the record of 2,806 deaths on April 14, according to a Reuters tally of official data.

That one-day figure is sometimes reported higher due to a backlog of deaths that were not compiled until April 14.

With hospitalizations for Covid-19 reaching a record high of 87,000 in America on Tuesday, the nation’s leading infectious diseases official urged people to keep celebrations as small as possible.

US hospitalizations for COVID-19 reached a record high of 87,000 on Tuesday[/caption]

Dr Anthony Fauci stressed the need to “hang in there a bit longer” on wearing masks, maintaining distance and avoiding crowds – especially indoors.

“If we do those things, we’re going to get through it. So that’s my final plea before the holiday,” he said during an interview on Good Morning America.

On Tuesday, shocking pics showed bodies in bags marked “Covid” were stacked in refrigerated trucks in hard-hit Texas this week.

Mobile morgues were seen at the El Paso County Medical Examiner’s Office on Monday as the number of cases across the country totaled more than 12 million.

Staffers at the medical examiner’s office were photographed moving bodies in bags labeled “Covid” in what appears to be written in marker.

The body bags were set to be moved from the refrigerated trailers to the morgue office.

The photos are similar to pictures taken in New York City earlier this when hundreds of bodies were seen in freezer trucks in Brooklyn.

The CDC announced on Tuesday that it is reassessing the quarantine period.

Officials are reportedly set to publish new guidelines lowering the recommended period from 14 days to between seven and ten days.

With US hospitalizations reaching a record high on Tuesday, infectious disease officials urge people to keep Thanksgiving gatherings as small as possible[/caption]

“We do think that the work that we’ve done, and some of the studies we have and the modeling data that we have, shows that we can – with testing – shorten quarantines,” he said.

He added that, if a person’s swab test is negative, then “their probability of going on and developing an infection after that is pretty low”.

Help may also be coming with vaccines showing promise.

This will happen after the first one is cleared by regulators for emergency use, which could happen as soon as December 10.

If all goes well, 40 million doses will be distributed by the end of the year, they said.

If we do those things, we’re going to get through it. So that’s my final plea before the holiday.

A Food and Drug Administration (FDA) ruling on the Emergency Use Authorization for the Pfizer vaccine is expected on December 10.

Moderna said its two-dose jab was 94.5 percent successful at fighting the deadly virus in infected volunteers – and Fauci said it may also be rolled out next month, pending FDA approval.

Both Pfizer and Moderna’s company bosses plan to submit their vaccines to the regulators in the US for emergency authorization “within days” before sharing them with others around the world.

“We continue to move at the speed of science to compile all the data collected thus far and share with regulators around the world.”

President-elect Joe Biden has promised to make fighting the pandemic his top priority upon taking office on January 20.

Fauci told C-SPAN on Wednesday that he had been in contact with Biden’s staff and was willing to serve on any task force to beat the virus.

Donald Trump made a one-minute appearance in the White House briefing room on Tuesday to talk about the stock market after touting his involvement in the vaccine rollout last week.

Millions of Americans will be flying this week [/caption]

The AAA forecast 6.3 million people will have flown in the days before and after Thanksgiving[/caption]

As US hospitalisations reach over 80,000 President-elect Biden says fighting the pandemic is his first priority[/caption]

Lockdown, here we come! Britons say UK will be plunged back under Covid rules this winter

PRINCE Harry may have left behind his royal job, his family and his posh English friends – but he has a new…

Christmas is coming and it’s the season of travelling to visit family, friends or new destinations. Ahead of the festive season, travellers…

Natural coronavirus immunity could be TWICE as common as experts thought, PHE says

PRINCE Harry may have left behind his royal job, his family and his posh English friends…

Christmas is coming and it’s the season of travelling to visit family, friends or new destinations.…

The Queen spoke yesterday via video link to Dame Cindy Kiro, who is swearing in this…