Yorkshire and The Humber, the North West and the North East of England have the highest positivity rates, latest official figures show. 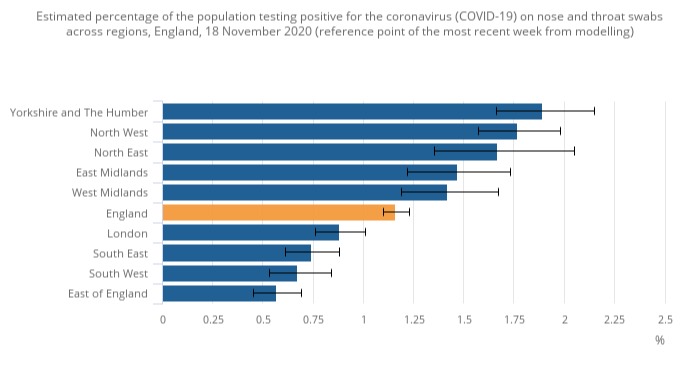 The data from the Office for National Statistics has been published today ahead of the Health Secretary’s announcement later in Parliament.

Matt Hancock is due to set out which tier each local authority will fall under in a speech to the House of Commons at 11am.

The ONS figures suggest that the number of people testing positive has fallen in the West Midlands, East of England, London, South East and the South West.

Figures are based on swab tests carried out between November 15 and November 21.

Each area will be placed into one of three tiers when lockdown ends on December 2 – but the system has been toughened from the previous regime, meaning more authorities will move into the higher tiers.

On Wednesday night reports suggested there would be few areas in England placed in Tier 1, with The Times reporting parts of eastern England and remote areas in Cornwall and Cumbria are expected to be allocated the lightest measures.

Mr Hancock said: “Thanks to the hard work and sacrifice made by people up and down the country, we are able to move out of national lockdown and into more targeted local, tiered restrictions.


What tier will I be in? Map reveals Covid hotspots that could end up in Tier 3


Europe will be hit by THIRD Covid wave next year, WHO fears

“I know for those of you faced with Tier 3 restrictions this will be a particularly difficult time but I want to reassure you that we’ll be supporting your areas with mass community testing and extra funding.

“By following the rules together we can get out of these tough measures.”

Covid vaccine: What is the difference between the Oxford and Pfizer vaccines?

A chickenpox-type rash known as an erythemato-vesicular rash is another skin symptom to be aware of. The rash involves areas of small,…

Soaps – Britain’s great entertainment obsession. Whether your fave is Corrie, Eastenders or Emmerdale, we’ve got all the latest news, gossip and…

Is December 9 the day Britain starts its Covid vaccination drive?

Villas-Boas wants every No10 shirt in world retired in Maradona tribute – but which current icons would lose the jersey?

A chickenpox-type rash known as an erythemato-vesicular rash is another skin symptom to be aware of.…

Soaps – Britain’s great entertainment obsession. Whether your fave is Corrie, Eastenders or Emmerdale, we’ve got…

Charred body of ‘murdered’ girl, 17, found at bottom of ravine after boyfriend told cops where to find her