FLOYD MAYWEATHER is in talks to fight Billy Joe Saunders if he beats Saul ‘Canelo’ Alvarez, an insider has claimed.

It comes with the 50-0 undefeated boxing legend considering a shock return to professional boxing.

Mayweather was the only boxer to ever defeat Canelo, who is widely regarded as one of the best pound for pound fighters in the world.

Brit Saunders, an undefeated WBO super middleweight champ, has a chance to cause a major upset in the boxing world if he beats the Mexican boxing star on Saturday in their world title fight.

A victory could also lead to a match with boxing legend Mayweather, according to a source in Money’s camp.

Mayweather, who faces YouTuber Logan Paul in an exhibition match on June 6, has not fought a pro boxer since his retirement in 2017.

“Floyd is considering a return to professional boxing and wants to fight Billy Joe Saunders,” the source said.

“After the Logan Paul fight, he really wants to beat his brother Jake. Then he’s hoping to fight Conor McGregor next year.

“But he doesn’t just want to do these kinds of exhibition matches. 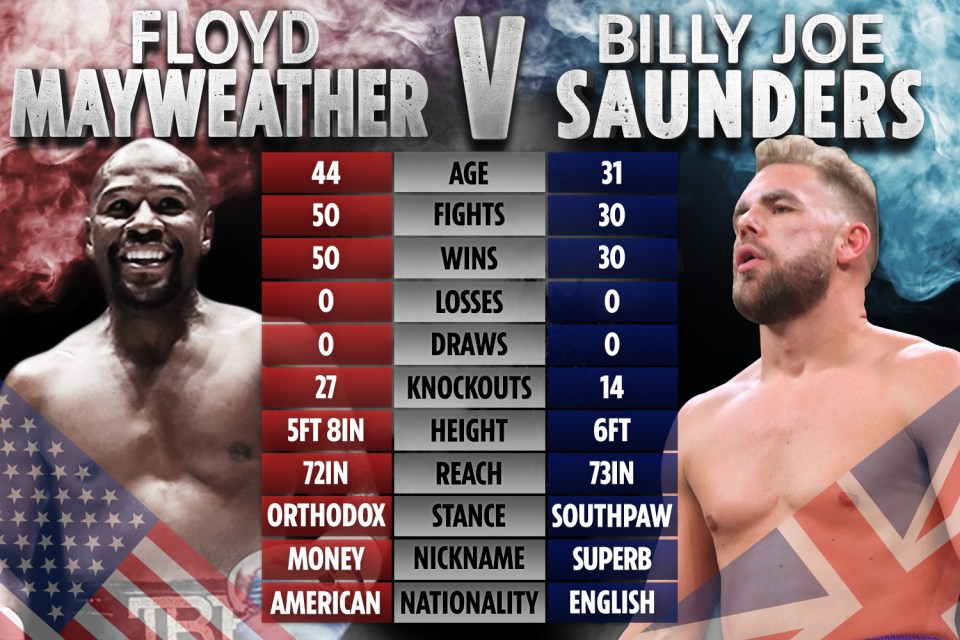 “He rates Billy Joe and he’s been in talks to fight him if he beats Canelo. Remember Floyd is the only fighter to ever beat Canelo.

“Floyd always keeps himself in top shape so it’s not going to be hard for him to make the come back.”

He did come back a year later to face featherweight kickboxer Tenshin Nasukawa in a one-round exhibition beating.

BETTING SPECIAL – GET CANELO TO WIN AT HUGE 20/1 ODDS

If the Mayweather-Saunders fight were to happen it would be the first time he’s taken on another pro boxer in four years.

Manny Pacquiao’s ex-sparring partner George Kambosos also recently told The Sun that he would like to see the Filipino boxer face Mayweather in a rematch.

The 44-year-old boxing champ, who won 15 world titles across five weight classes over his career, has previously heaped praise on Saunders, 31.

Speaking at an event in Sheffield during a tour of the UK last year, Mayweather described Saunders as one of the best Brit fighters.


Canelo Alvarez vs Billy Joe Saunders: How to watch fight live on DAZN in UK

When asked about his chances in the Canelo fight, he said: “Anything can happen in the sport of boxing…

“But he must know just because in my fight with Canelo, I used certain angles – Canelo, I can tell he’s been watching my tapes, I can tell Canelo has been studying my moves.

“Canelo fought GGG, he beat [Sergey] Kovalev so Canelo’s making a lot of noise in the sport of boxing, but I don’t want Billy Saunders to overlook Canelo.

“I think it’s gonna be a helluva fight.”

The Canelo-Saunders fight is set to be held at the AT&T Stadium, home of the Dallas Cowboys NFL team in Arlington, Texas in front of 70,000 fans.

Julian Assange, who denies any wrongdoing, is being held at UK’s Belmarsh Prison. Lawyers for the United States launched a fresh attempt…

Julian Assange, who denies any wrongdoing, is being held at UK’s Belmarsh Prison. Lawyers for the…

FORMER Emmerdale star Kelli Hollis has revealed she is working in a café. The actress quit…

HWANG Dong-hyuk, the creator of the widely popular Squid Game, has insisted “I’m not that rich”…