BRITS holidaying in green list countries may not be able to use free NHS Covid tests because of concerns over their effectiveness, a report says.

Instead, a family-of-four travelling to one of the government’s approved tourist spots could end up paying £320 for tests before their departure and on their return to the UK.

Travellers returning from green list countries – which include Portugal, Israel and Gibraltar – need to take a test at least 72 hours prior to departure.

But, sources say the free kits, which provide results within less than 30 minutes, may not be allowed when the travel list comes into affect on May 17, the Telegraph reports.

This is because the lateral flow tests – which are self-administered by holidaymakers – are not as accurate as their costly PCR counterparts, where the tests are carried out in labs.

An insider said: “It is more about the implementation than the science. How do you check the results? How do you validate them?”

Last week, British Airways prevented a couple from boarding a jet when they presented their lateral flow test results. 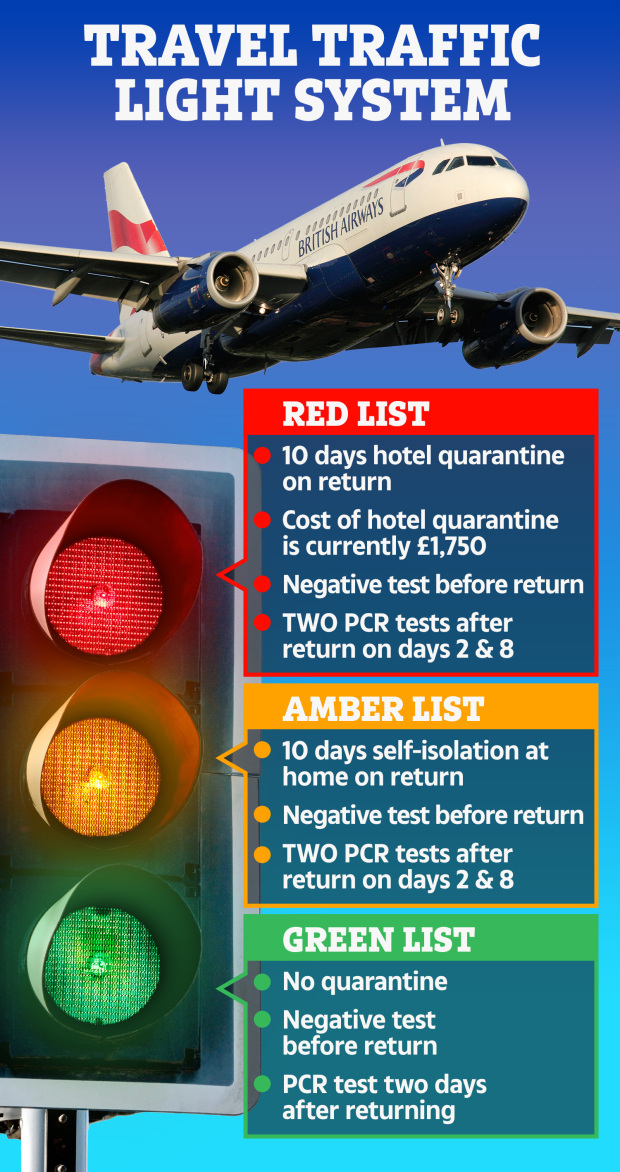 A spokesman for the Department of Transport said it was working with industry chiefs to cut the costs of holidaying while ensuring travelling remained safe.

This comes as travel bosses have called for more countries to be added to the green list – including Brit favourites France and Spain.

Industry leaders have accused Number 10 of an “excess of caution” after just twelve destinations got the go-ahead for quarantine-free travel from May 17.

Brit tourist hotspots such as France, Spain and Italy will be in the amber category – so travellers will need to self isolate for ten days on return and take two post-arrival tests.

Brian Strutto, of pilots’ union Balpa, said the government’s cautious approach was “extremely disappointing for everyone who works in the travel sector and the millions of people who are desperate to jet away on holiday or business”.

He added: “Almost all tourist hotspots in Europe, including Spain, France and Greece, are in the amber category, which is as good as red as far as most tourists are concerned, with potential 10-day quarantine needed on return.”

Bill Clinton, 75, will spend one more night in hospital and be discharged tomorrow after ‘sepsis from UTI’ battle

Fortunately, there are a number of things which can help lower your blood pressure. There will not always be an explanation for…

MANCHESTER UNITED’S title challenge appears to be waning after a harrowing 4-2 defeat at Leicester. The Red Devils thought they were back…

While boys over age 13 returned to school, girl pupils are barred from attending. (Representational) Kabul:…

Fortunately, there are a number of things which can help lower your blood pressure. There will…