GAME OF THRONES star Hafthor Bjornsson has left his fans worried after showing off his sparring skills ahead of his boxing match with Eddie Hall.

The strongmen rivals have been at each other’s throats for years and will finally settle their differences in Las Vegas later this year year.

But first, Bjornsson will face Irish cruiserweight Steven Ward in Dubai to test out his skills.

The 32-year-old weighed in at more than NINE stone heavier than his rival this week.

But fans were left concerned that he would eventually suffer a first-round KO against Hall after he shared a YouTube clip of his sparring session.

He captioned the post: “Skuli and I decided to try out new gloves.

“You have been asking for more boxing.

“Here you have little bit from the session the other day. More is coming…”

One concerned fan commented: “With all the respect I have for Hafthor, it will be a long way to avoid to get KO on the 1st round, best of luck!” 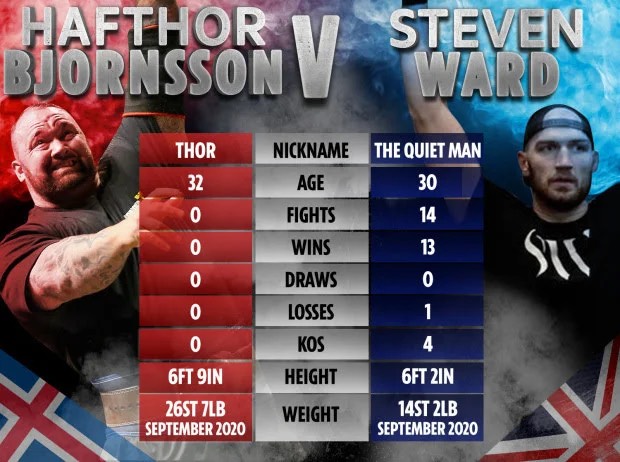 A third wrote: “You need to start using your feet to move different directions, you can’t go into boxing ring moving only forward you will get knocked out, brother.

“You never throw a bodyshot? Uppercut?

After reading some of the comments, Bjornsson felt compelled to reassure fans he is being coached… and that the video was actually old.

He added: “I have two coaches right now helping me. This is two weeks old video btw.”

Rival Hall has even claimed he “wouldn’t p**s on Bjornsson if he was on fire.”

Amongst other things, the pair rowed over Bjornsson’s world-record deadlift and Hall’s win at the 2017 World’s Strongest Man competition.

And Hall, 32, has made it even clearer just how much he hates the Game of Thrones star.

Hall, who has been training intensely during lockdown, told The Mac Life: “Me and Hafthor have been big-time competitors for a long time.

“We’ve got a hell of a history competing against one another.

“We absolutely f***ing despise each other beyond belief.

“The hatred is 100 per cent real. If I saw Thor face-to-face it would take a lot for me not to punch him in the face.

“When the boxing came around it was a no-brainer. I get to settle a score and make a few quid, it’s a win-win.

A post shared by Eddie hall – The Beast (@eddiehallwsm)

PS5 UK stock – Currys, Amazon and Argos tipped for PlayStation console restocks NEXT WEEK as GAME and Smyths sell out

Coconut oil is known for its incredible moisturising properties, as well as being an excellent cleaner and polisher to use around the…

When will Prince Harry and Meghan’s interview air? The CBS special which is due to focus mainly on Meghan with Harry joining…

A COMPANY boss has landed a £130,000 payout after slipping head-over-heels on a pool of Baileys Cream Liqueur at Heathrow Airport. Andreas…

Coconut oil is known for its incredible moisturising properties, as well as being an excellent cleaner…

When will Prince Harry and Meghan’s interview air? The CBS special which is due to focus…

A COMPANY boss has landed a £130,000 payout after slipping head-over-heels on a pool of Baileys…

Max Clifford: If I hadn't had a simple blood test, I'd be dying of prostate cancer now

Max Clifford: If I hadn’t had a simple blood test, I’d be dying of prostate cancer…