Drug makers at forefront of post-Brexit UK: Glaxo and Astrazeneca get green lights for ground-breaking HIV and lung cancer drugs

British drugs groups have won approval for ground-breaking treatments, as regulators hatch plans to put the sector at the heart of the post-Brexit economy.

Glaxosmithkline’s long-acting HIV drug Vocabria – which reduces the number of times patients need to medicate from 365 days a year to as little as six – has been given the green light in Europe.

At the same time, rival Astrazeneca said blockbuster drug Tagrisso has been approved for yet more patients with early-stage lung cancer. 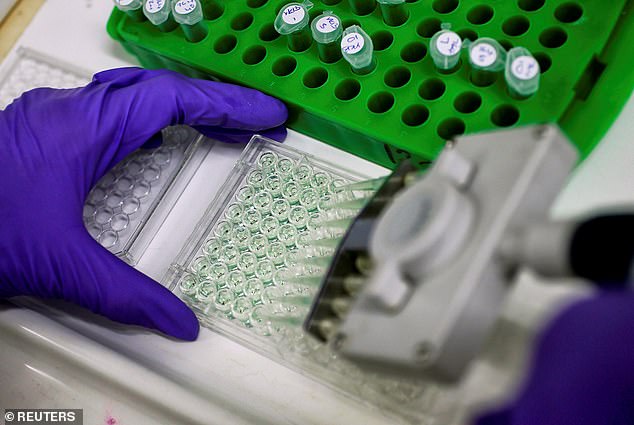 The announcements are a boost for both firms as they continue work on vaccines for Covid-19.

It follows reports that the UK medicines regulator is seeking quicker approvals for the most innovative medicines, in a boost to the country’s life sciences sector.

As was the case with the coronavirus jab developed by US giant Pfizer, this would allow drug makers to have clinical trials data reviewed on a rolling basis by regulators – speeding up the approval process.

The UK’s prowess in life sciences has been on display during the coronavirus crisis, with a potential vaccine developed by Astra and Oxford University expected to be approved before the end of the year.

Both have been subject to ‘rolling review’ by the UK Medicines and Healthcare products Regulatory Agency (MHRA), which accelerated the speed at which they were approved, and ministers now hope this approach could be applied to other drugs in future.

The changes would be designed to make the UK ‘a place where people come to develop innovative medicines’ after the Brexit transition, one source told the Financial Times.

The UK is already host to Glaxo and Astra, two of the biggest drug makers in the world, and more than 60,000 people are employed in the bio-pharmaceutical industry.

Brentford-based Glaxo said its HIV shot would revolutionise treatment for patients, reducing side effects and the frequency they will have to take medication.

Meanwhile, Astra said US regulators had approved Tagrisso for treatment of adults diagnosed early enough for their tumour to be surgically removed and who have a certain genetic mutation.

It comes after trials showed Tagrisso cut the risk of death or the tumour growing back in patients by 80 per cent.

Ford’s electric battle with Tesla hotting up: We drive the new Mustang Mach-E GT – a rival to new Model Y for…

Some people may not know that you can reduce your risk of dementia. Indeed, although there are some risk factors you can’t…

ALEC Baldwin’s niece Hailey Bieber has revealed she is “heartbroken” over Halyna Hutchins’ “devastating” death, as she sent her condolences to her…

What does the new strain of Covid mean for me? Will the vaccine work?

Chelsea 3 West Ham 0: Silva header and Abraham double get Blues back to winning ways and up to fifth in Premier League

Ford’s electric battle with Tesla hotting up: We drive the new Mustang Mach-E GT – a…

Some people may not know that you can reduce your risk of dementia. Indeed, although there…

ALEC Baldwin’s niece Hailey Bieber has revealed she is “heartbroken” over Halyna Hutchins’ “devastating” death, as…