HAFTHOR BJORNSSON has revealed his dramatic body transformation after dropping the pounds ahead of his fight with Eddie Hall.

The Icelandic giant, 32, showed off his huge weight loss and bulging muscles in an Instagram post revealing he now weighs 155kg.

That is equivalent to 24st 5lb – four stone less than he weighed last year when setting a new deadlift world record at 501kg.

Opponent Hall, 33, has also slimmed down in recent months, cutting down to around 25st.

And all eyes will be on Las Vegas in September when the pair collide to settle their long-running feud which stretches back to their competitive strongman days.

Hall, 6ft 3in tall, is yet to step in the ring for a warm-up fight as the big day draws closer.

But Bjornsson, who stands at 6ft 9in, has already experienced boxing with an exhibition draw against Steven Ward.

The Game of Thrones star, who played Gregor ‘The Mountain Clegane’, is now back in Dubai for a training camp.

He was due to face Alex Simon this month before the Australian suffered a torn bicep.

And Bjornsson will instead take on Simon Vallily on May 28.

BETTING SPECIAL – GET CANELO TO WIN AT HUGE 20/1 ODDS 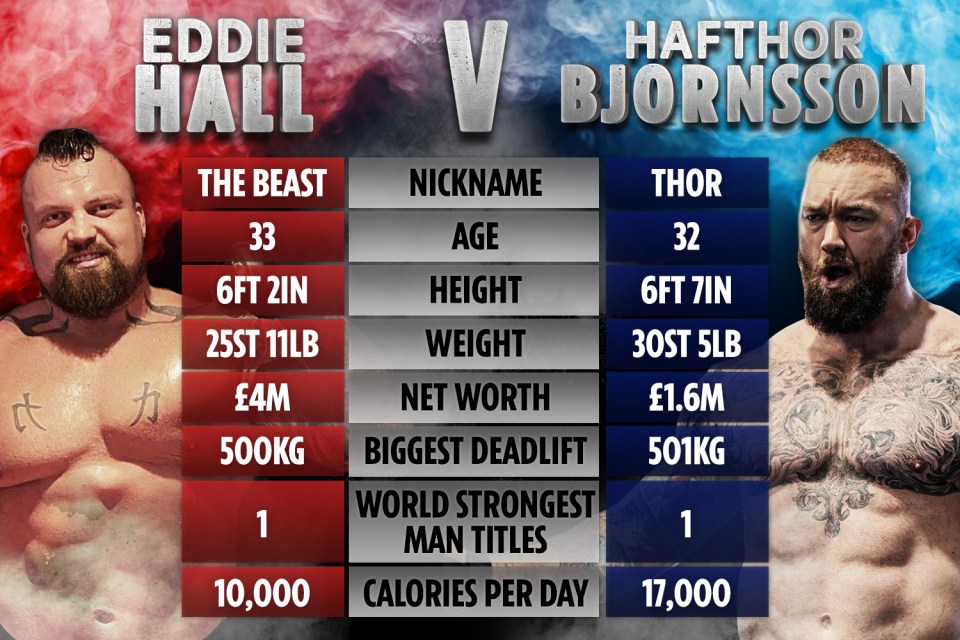 READY TO PAY THE BIL

The behemoth recently showed off his nimble footwork and jabs as he trained on a heavy bag.

He has also been having an EXERCISE BALL thrown at his body to prepare for Hall’s powerful punches.

Hair loss diet: The 5 foods to avoid to stop your hair falling out

A NEW vodka is made of apples from Chernobyl’s radioactive zone. UK and Ukrainian scientists created the spirit, ATOMIK, to support communities…

THE Only Way is Essex star Chloe Brockett has broken down in tears and quit social media saying she’s “drained”. The 20-year-old…

Ashley Cain and Safiyya Vorajee reveal they’re setting up a charity in Azaylia’s name with the £1.6m raised by fans

A NEW vodka is made of apples from Chernobyl’s radioactive zone. UK and Ukrainian scientists created…