From the Covid crash in February to this month’s vaccine breakthrough, investors have had quite the ride on the markets this year.

But what can a novice investor learn from 2020? Though the markets have seen record falls – and some dramatic gains – a look at the whole year underlines the wisdom of cautious investing.

Namely, never to react too quickly, and always ensure your eggs are not all in one basket. Nine months on from the big shock, investors who followed advice to hold their nerve are finally seeing a recovery. 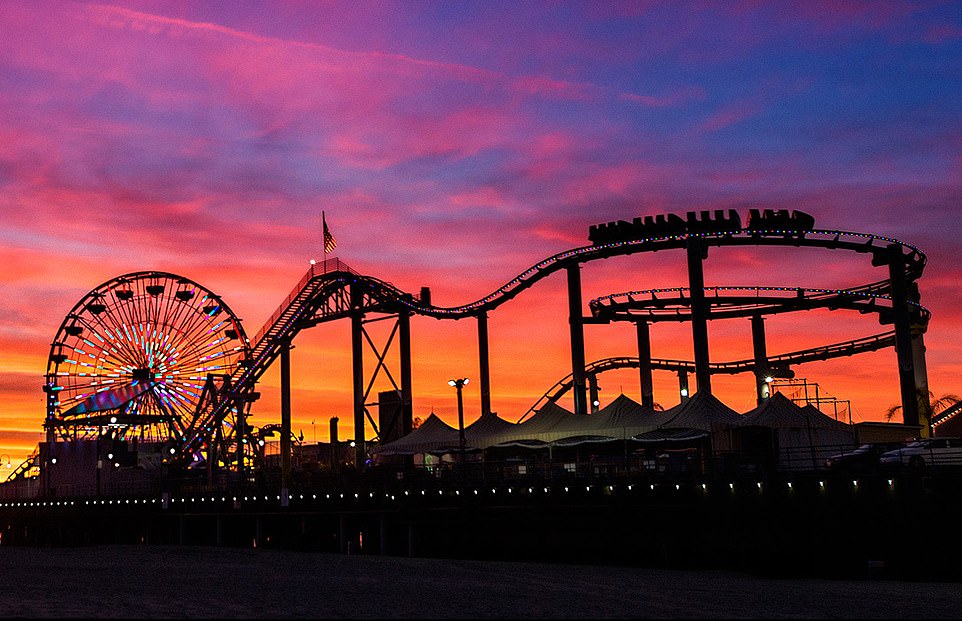 Roller coaster ride: Though the markets have seen record falls – and some dramatic gains – a look at the whole year underlines the wisdom of cautious investing

The evergreen advice to diversify your portfolio has also proved its worth, as certain markets have performed rather better than others.

Meanwhile, investors who followed the news and reacted to global events may also have managed to boost their savings…

January 2: The FTSE 100 opens at 7,604.30 — the highest level since 2018, with shares still riding high on a ‘Boris bounce’ after the Conservative Party won a strong majority in last month’s general election.

January 28: World markets react to the news that the deadly coronavirus, previously confined to Wuhan, has reached Beijing, China’s capital city. Despite an initial wobble, shares regain their value.

February 24: A sharp spike in coronavirus cases outside of China sends stock markets plunging. The FTSE records its third worst day in history, falling 4 per cent, and costing investors almost £100 billion in the process.

The evergreen advice to diversify your portfolio has also proved its worth, as certain markets have performed rather better than others

February 28: Global sell-offs gather pace, with investors around the world losing more than $1.7 trillion in one week.

The FTSE suffers its worst week since the 2008 financial crash, with more than £250 billion wiped off the value of the UK’s biggest companies.

EasyJet, one of the biggest losers of the week, falls 17 per cent in five days. Travel company Tui fares even worse: a 30 per cent loss.

March 9: Plummeting oil prices spark fears of a global recession. BP and Shell drop by 18 per cent and 14 per cent respectively.

March 18: After European car manufacturers cease production, shares in BMW drop again – they’re now down 50 per cent in one month.

March 24: As Britain follows most European countries into lockdown, world markets rally on news that the U.S. Federal Reserve plans to pump $2 trillion into the American economy.

March 27: As Prime Minister Boris Johnson puts the brakes on the property market, telling buyers and vendors to cease their plans, shares in homes builder Taylor Wimpey fall by 9 per cent. Property website Rightmove slumps by 6 per cent.

After a rocky start, I’m addicted to investing now

As a child, Ed Warburton had it drilled into him that the stock market was a dangerous place.

His parents opened a cash Isa for him and he was warned to steer clear of investing.

But he was fascinated by the stock market. In January, after watching YouTube videos on how to select an investment platform, he made his first investment, aged 34, with AJ Bell. 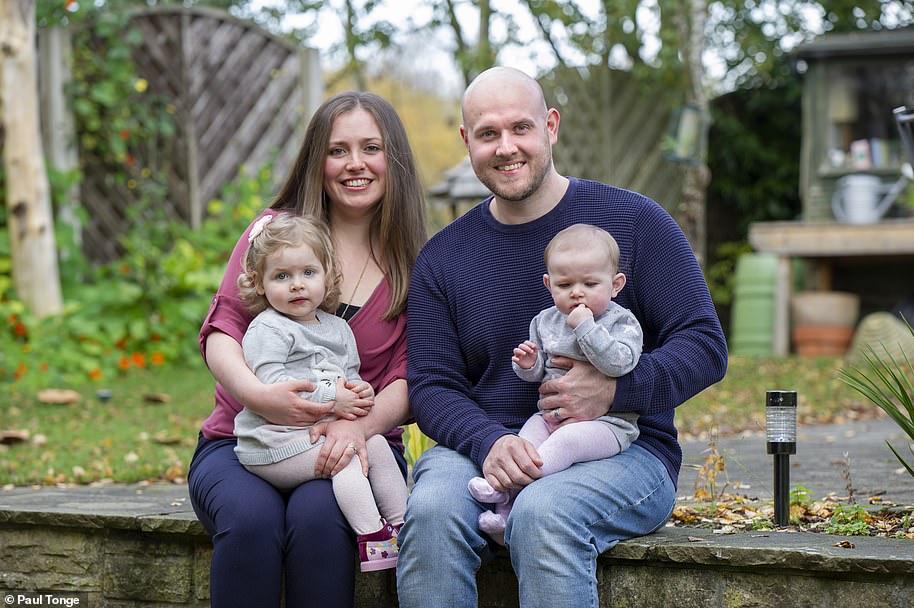 Ed Warburton, pictured with wife Colleen and daughters Aurora-Rae, seven months, and Ariadne-Rose, 20 months, made his first investment in January

To begin with Ed, who is married to Colleen, 34, says: ‘It was nerve-racking.’ So he stuck with Exchange Traded Funds (ETFs).

An ETF is a fund traded on the stock exchange, that tracks a particular index such as the FTSE 100, and is made up of a basket of shares or bonds.

After a few months, technical consultant Ed wanted to increase the amount of risk he was taking. He created his own investment portfolio by selecting individual companies to invest in.

The father-of-two, from Hadfield in Derbyshire, says: ‘I listened to Bloomberg Radio to keep up to date on how current affairs affect the stock market and I created a watch list of companies using a website called investing.com.

‘I’ll admit, I’m addicted to investing now.’ His strategy is to look for companies that are seen as pioneers.

His shares in tech firms including Tesla, Plug Power and Uber have returned 128 per cent, 124 per cent, and 51 per cent respectively.

Ed plans to invest for the next 20 years so he can retire early and pass money to his daughters Aurora-Rae, seven months, and Ariadne-Rose, 20 months.

He says: ‘I’m glad I experienced a market crash so early, as I have seen how some stocks and funds can recover.’

May 11: After a bruising three months, stock markets across the world begin to recover, reversing some of their February and March losses.

However, Wall Street veterans warn of an unsustainable rally, driven by market excitement.

June 1: Gambling companies jump as the Government confirms that top-flight football will return (minus spectators).

Shares in Flutter, the operators of betting firm Paddy Power, are up 45 per cent since March.

June 3: With its shares down 50 per cent since January, easyJet is relegated from the FTSE 100.

A real risk with investing is falling prey to scammers. British savers lost £55.2 million to investment cons in the first six months of the year — twice as much as two years ago.

It is important to remember that no legitimate investment firm will contact you out of the blue, offering you the chance to get rich quick.

If an opportunity sounds too good to be true, it almost certainly will be. Fraudsters often promise unrealistically high returns.

Hang up on cold callers and ignore unsolicited emails and letters. Beware of scammers pretending to represent well-known investment firms, too.

Make sure you understand an investment before risking your cash. Or limit your investing to an investment platform you can trust.

Read our guide to finding the right platform for you here.

July 2: Better-than-expected employment data from the U.S. boosts markets around the world. Banking shares mount a strong recovery, with RBS climbing 4.5 per cent in a day.

July 6: Shares in Boohoo, the fast-fashion company and a recent FTSE success story, fall by 20 per cent following allegations of modern slavery practices in its Leicester factories.

July 22: B&Q owner Kingfisher announces a rise in profits, triggered by a lockdown DIY boom. Its shares are now up by 50 per cent since March.

September 2: The big tech stocks of Silicon Valley continue to rocket as Amazon shares hit an all-time high of $3,531 – a 40 per cent rise in just three months.

September 8: The FTSE drops one percentage point as fears of a ‘no deal’ Brexit re-emerge. In the U.S., a sell-off of tech shares sees Amazon slide to $3,149.

October 1: Shares in Rolls-Royce, once a darling of the FTSE, slump to their lowest level in 16 years – this is an 80 per cent loss since January.

October 19: Shares in Zoom, the video-conferencing platform that few had even heard of before lockdown, hit at an all-time high of $568 per share, having doubled in value eight times since January.

November 4: Joe Biden’s projected victory in the U.S. presidential election leads to a mini stock market rally, as shares jump on the hopes that a Democratic president will mean a fresh round of financial stimulus.

The FTSE 100 jumps 5 per cent – with travel and hospitality stocks heading the race – as markets finally sense light at the end of the Covid tunnel.

Chancellor mustn't punish me for saving during pandemic

GEMINI MAY 22 – JUNE 21 Gemini, a chat or course you join on a whim has potential to transform your whole…

PEAKY Blinders fans can stay in the house which features in the show as the home of Arthur Shelby. Located in Cheshire…

Mr Van-Tam warned those who have had the vaccine could still be “spreading the virus” and putting other vulnerable people at risk. It…

MICHAEL CHANDLER made an emphatic statement in his long-awaited UFC debut, TKO’ing the No.6-ranked Dan Hooker.…