Worry not – before you start Googling “turkey basting”, “giblets” and “gravy roux”, read our dummy’s guide to making the perfect festive dinner.

GET ahead on Christmas Eve by prepping your veggies.

James says: “The day before, bring a large pan of salted water to the boil.

Prep your veggies by blanching them for three to six minutes, depending on the size[/caption]

“Blanch each type of veg individually for three to six mins, depending on the size. Remove with a slotted spoon, plunge into ice-cold water, then drain.

“Put the veg on a tray and store in the fridge. On the day, just before it’s time to serve the main course, bring a large pan of water to the boil, add the veg and cook for two to three minutes.

“Drain and dot with butter. Serve in a large dish.”

Give your turkey time

FIRST things first, remember to defrost your turkey, remove the giblets and make sure you leave enough time to cook it.

As a general rule, allow 20 minutes per kilo plus 70 minutes if your turkey is less than 4kg. For a 4kg to 5kg turkey, that is around 2½ hours.

And don’t forget to let the turkey rest before eating, too.

Jamie says: “Knowing the exact weight will ensure the cooking time is correct, and thus avoid an overcooked and dry bird, or a raw one.

“And don’t forget to leave time for your turkey to rest when it comes out of the oven.

“Turkeys between 4kg and 6kg should be rested for 1½ hours, and ones from 6kg to 10kg can rest for two hours.”

Streaky for pigs in blankets

IT’S easier wrapping fiddly chipolata sausages in streaky, rather than back or middle bacon and Jamie suggests adding a drizzle of honey during cooking.

“Drizzle in the honey, then place on a medium heat on the hob and bring to the boil until caramelised, shaking continuously to coat. Serve immediately.” 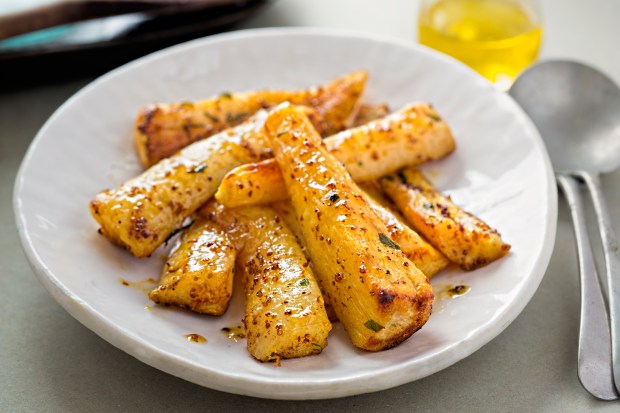 DON’T ruin parsnips by peeling them, as Jamie reckons all the taste and goodness is in the skin.

He says: “I only found this out about five or six years ago and I’ve been cooking since I was eight.

“Just cut off the ends and par-boil them for about six minutes.

“Drain them, toss them in your chosen fat, add some herbs, then roast them with salt and pepper for about 50 minutes at 180C. Put your parsnip glaze on in the last five minutes of roasting.”

Nigella goes further and drizzles maple syrup on hers.

FOR the simplest stuffing use a boxed mix. Marco adapts this by adding fried chopped onions and some sage to the mix, along with some boiling water (as per the packet instructions).

He then adds sausage meat and stuffs it inside the neck of the turkey before cooking.

Or you could roll it into balls, put on a loaf tin and sprinkle with sage leaves. Bake for 30 to 40 minutes.

John recommends beating the mixture with a wooden spoon for three minutes to get some air into it so that it expands during cooking — leaving it fluffy rather than stodgy.

IT’S a tradition in many households to score sprouts before boiling, but experts say this can leave them waterlogged.

Delia recommends we buy small sprouts and steam them.

Don’t score your sprouts – it can leave them waterlogged[/caption]

She says: “You don’t want big golf balls, you want to buy small ones. If there are any outer leaves, take them off.

“You don’t need to make any little crosses and I think they’re best simply steamed. You can toss in a bit of butter if you want.”

Buy small sprouts and steam them, just like Delia Smith[/caption]

ONE of the biggest complaints about turkey is that it is too dry.

Nigella recommends giving it a bath before popping it in the oven, which means adding is to a large pan with water, salt and spices such as cloves.

She says: “For me, the only turkey is a brined one.

“Not only will it tenderise the meat and add subtle spice and depth of flavour, it’ll also make carving the bird much easier.”

If finding a pot big enough sounds like too much trouble, other celebrity chefs, including Martha Stewart, suggest turning the bird upside down halfway through cooking so that it bastes itself — though be extremely careful not to spill any hot turkey fat.

Jack Layer, a MasterChef finalist in 2016, who runs exclusive monthly supper clubs in London’s Covent Garden, also recommends this method, saying: “Half way through cooking, tip the turkey upside down to let juices flow through the meat.”

Nigella Lawson recommends putting it in a bath of water, salt and spices before popping it in the oven[/caption]

IF it’s not broken, why fix it? Many of us still have a retro prawn cocktail as a starter on Christmas day.

For the sauce, James suggests simply mixing ketchup with a teaspoon of brandy, a few drops of Tabasco to taste and one teaspoon of Worcestershire sauce.

He makes his own mayonnaise to mix it with, but a shop-bought version will do the job too.

Then once you’ve made your sauce, James says: “Pile lettuce into dishes, top with prawns and a dollop of sauce then sprinkle over cress.” 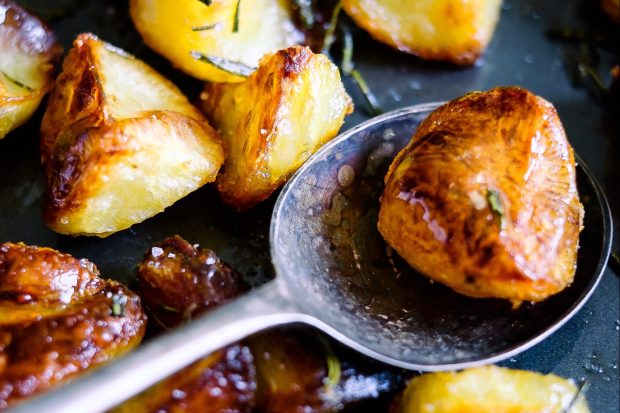 IT can be difficult to perfect the crunchy outside and soft, fluffy inside of roast potatoes, so why not cheat?

Sprinkle on some ready-made bread-crumbs, or as Gordon suggests, semolina.

He recommends par-boiling and steam-drying potatoes first, before roasting them in duck or goose fat.

He said: “For the ultimate crunch, gently shake the potatoes to create fluffy edges that will crisp up while roasting and finish with a sprinkling of semolina – this will add a heavenly crunch to the potatoes.”

Then pop them in the oven to roast.

COMMON gravy mistakes are that it is too lumpy or a bit watery.

To avoid the lumps, whisk! And to avoid gravy being too watery, top chefs always make a roux first — turkey fat, butter and oil — then gradually add stock. Gordon adds a splash of booze, too.

To make the perfect gravy, make a roux out of turkey fat, butter and oil before gradually adding stock[/caption]

He says to drain the excess fat from the roasting tray, then put it on the heat on the hob. Then add bacon (if you have had it wrapped around the turkey), onions and the lemon from the cavity – all chopped up.

He adds chopped tomatoes, rosemary sprigs, the wings of the turkey and, importantly, dry cider.

Then once the liquid has reduced, mash up some veg, pour in stock and reduce again by a third. Strain through a sieve, pressing down on the solids, and serve.

James has a secret gravy hack too — freeze any leftover in an ice cube tray so that you can save it and simply warm it up later.

Heat brandy before pouring on to pud

CHRISTMAS pudding just isn’t the same without a good splosh of plonk, but to get the most spectacular results make sure you heat the brandy first.

Mary says: “Steam or boil the pudding for about an hour to reheat. Then turn it on to a serving plate.

“To flame, warm three to four tablespoons of brandy or rum in a small pan. Pour it over the hot pudding and set light to it.

Cheat with the trifle

Mary says: “Spread the apricot jam over one half of each slice of sponge and sandwich together with the other half.

“Drain the tinned apricots, reserving three tablespoons of syrup from the tin, and chop the apricot halves into chunks.

“Arrange half the sandwiched-together trifle sponges in the base of a glass trifle bowl and press them in.

Mary Berry’s apricot trifle is delicious, and it can be made a day ahead and kept covered in the fridge[/caption]


December 24: The sound of someone’s voice assures you love is there


I’ve got 5 kids with QUADS, Christmas is chaos but here's how I keep it cheap

“Pour over half the apricot syrup and half the brandy until all the sponge is soaked. Scatter half the chopped apricots over the top.

“Repeat with another, final layer of sponge, apricot syrup, brandy and apricots. Spoon over the custard, spread or pipe over the cream and scatter with the toasted flaked almonds.

“This can be made a day ahead and kept covered in the fridge. Make sure you scatter over the nuts just before serving so that they stay crisp.”

Turkey Orders Expulsion Of Envoys Of US, Germany, 8 Other Countries

WE are so lucky to live in Britain, and to be offered the booster jab. This pandemic has been a brutal shock…

WE are so lucky to live in Britain, and to be offered the booster jab. This…