THEY are one of the world’s richest power couples with a wealth of £93billion – greater than the wealth of 100 countries.

But Bill and Melinda Gates are now set to battle each other for a share of their tech-built fortune after their marriage crashed. 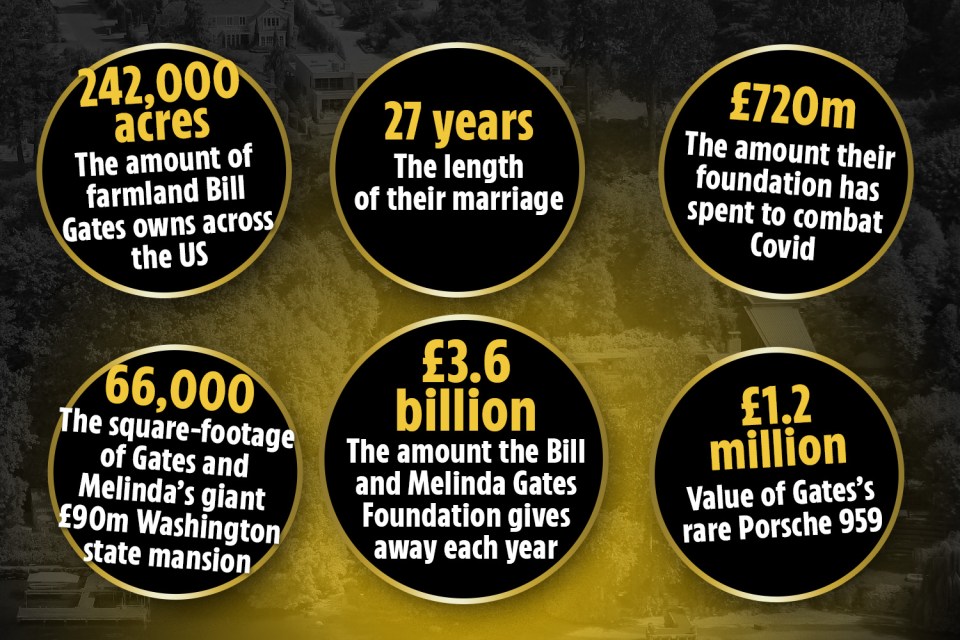 Last night it emerged Melinda, who met her husband while a manager at his software company, pressed delete on their 27-year marriage — calling it “irretrievably broken”.

Microsoft co-founder Bill has now hired lawyers at the legal firm started by his close friend, US tycoon Warren Buffett, amid claims the pair do not have a pre-nup.

The couple — who have hired three sets of lawyers EACH — had previously pledged to give most of their fortune away, but could now be forced to squabble over it in one of the costliest divorces in history.

Speaking out after her parents’ bombshell divorce news, their eldest daughter Jennifer, 25, revealed how it had shaken her family.

She said: “It’s been a challenging stretch of time. I’m still learning how to best support my own process and emotions as well as family members.”

Court documents lodged in King County, Washington, close to the couple’s giant 66,000-square-foot eco-mansion, showed it was Melinda, 56, who petitioned for the divorce.

They also reveal that the wealthy pair — who have the world’s largest charitable foundation — had already fleshed out a “separation contract”.

Melinda wrote: “The marriage is irretrievably broken. We ask the court to dissolve our marriage.”

The court documents dropped just 24 minutes after a statement from the couple appeared on their social media accounts, confirming their split.

They promised to continue their charitable foundation work, but said: “After a great deal of thought and a lot of work on our relationship, we have made the decision to end our marriage.”

US website TMZ claimed the 12 pages of divorce documents showed there was no pre-nup — but the New York Times reported that the couple were believed to have one.

A spokesman for the couple did not respond to requests for comment.

Either way, experts said it would be hard to split the huge wealth accumulated by Gates, 65, who is currently the world’s fourth richest man, according to Forbes magazine.

Washington state, where they live, requires that any wealth made during the marriage be split equally between the two parties if there is no pre-nup.

Gates, who co-founded Microsoft with childhood pal Paul Allen in 1975, became the world’s richest man in 1995 — one year after he married Melinda.

His divorce could go the way of fellow billionaire, Amazon founder Jeff Bezos, who announced in 2019 he was divorcing his wife MacKenzie after 25 years of marriage.

The pair negotiated a deal where MacKenzie took 25 per cent of his Amazon shares — making her the third richest woman in the world — but keeping him in the top spot.

An equal split between Melinda and Gates could drop him down to 17th on the Forbes rich list.

Emma Lawler, a family law specialist at Langleys Solicitors, said: “A lot of the Gates’s wealth is tied up in assets such as Microsoft. These cannot be easily dissolved and split.

“The Bill and Melinda Gates Foundation don-ates a large amount of their wealth to charitable causes.

“A lengthy and costly court case would impact its running and funding as their assets begin to be divided.”

The foundation said in a statement that the couple would remain co-chairs and trustees.

Melinda has three law firms working on the divorce.

Sherri Anderson — named on court papers as one of her attorneys — is on a list of “top 100 super lawyers” and is an expert in divorces involving complex financial issues.

Munger, Tolles and Olson was listed as one of three firms representing Gates. It was founded in 1962 by Charles Munger, now 97, a right-hand man to Gates’s pal Warren Buffett.

It appears that Gates is taking the decision to divorce as seriously as his decision to get married.

He only agreed to wed Melinda after making a pro and con list on a whiteboard.

Melinda previously revealed that the workaholic computer whizz “wanted to be married, but he didn’t know whether he could actually commit to it” while running Microsoft.

Gates said on Netflix documentary Inside Bill’s Brain: “I took the idea of marriage very seriously.”

The couple met after sitting next to each other at a Microsoft event in 1987 and she spurned his first date request because it wasn’t “spontaneous” enough for her.

Melinda, then a general manager at the computer company, won his heart by beating him at a maths game and Cluedo during a puzzle contest.

In her 2019 book The Moment Of Lift, Melinda wrote: “He urged me to read The Great Gatsby, his favourite novel, and I already had, twice.

“Maybe that’s when he knew he’d met his match. His romantic match, he would say. I knew I’d met my match when I saw his music collection — lots of Frank Sinatra and Dionne Warwick.”

The pair, who set up their foundation in 2000, have become the world’s top philanthropists.

Their huge charitable contributions have enabled them to gain access to governments and some of the globe’s most powerful people.

The foundation — which has had an endowment of £36billion — has been effective in reducing deaths caused by malaria and other infectious diseases.

It also spent more than £720million to combat the pandemic.

In 2010, the couple, along with Warren Buffett, created the Giving Pledge, an effort to get wealthy individuals to commit to donating a majority of their money to charity.

In the following years, Gates said his wife is a “truly equal partner”.

The couple, who have children Jennifer, Rory, 21, and Phoebe, 18, were thought to have one of the strongest marriages in the public eye.

But sources revealed yesterday how the relationship was said to have “neared collapse” several times in recent years.

Melinda said in 2019: “Some days were so incredibly hard in our marriage. I thought, ‘Can I do this?’”

She recalled exploding with rage when Bill wasn’t helping to pack up the car and sort out the children because his head was buried in a book about Winston Churchill.

Neither Melinda nor Gates have revealed if they have moved on with new partners.

When the pair began dating, their relationship was casual.

Gates once said: “She had other boyfriends, and I had Microsoft.”

The pair eventually married in Hawaii on January 1, 1994.

Intriguingly, a magazine piece, published three years after their wedding, revealed that Melinda would allow Gates a weekend every spring with his ex-girlfriend, businesswoman Ann Winblad.

It stated that the pair would “ride dune buggies, hang-glide and walk on the beach” at Ms Winblad’s holiday home in North Carolina.

Winblad, now 70, who founded a software-focused venture capital firm in 1989, reportedly said that they would “share our thoughts about the world and ourselves.”

Gates admitted he asked for her approval before marrying Melinda, although there was no suggestion of a continued romantic relationship between the ex-partners.

He and Melinda will now have to split their enormous wealth, which includes their £90million opulent mansion overlooking a lake in Medina, Washington.

Nicknamed Xanadu 2.0 after the fictional home in Citizen Kane, the house has a trampoline room, a screening room and a multi-room library filled with rare artifacts.

They also own a £43million ranch in Florida, two mansions worth £31million and £13milllion in California and a 492-acre home in Wyoming worth £6million.

Gates is also the biggest private owner of farmland in the US with 242,000 acres across 18 states.

The family’s fleet of sports cars includes a rare £1.2million Porsche 959, a Jaguar XJ6, a Ferrari 348 and an electric Porsche Taycan.

The couple own a series of plush private planes, including two Gulfstream jets, two Bombardier Challenger 350s, a Cessna Seaplane and a collection of helicopters.

They also have a collection of writings and sketches by artist Leonardo Da Vinci, called the Codex, worth around £22million.

In addition, Gates owns an art collection which includes an oil painting by Winslow Homer purchased for £26million and a George Bellows piece worth £20million.

Melinda spoke out yesterday — in an interview recorded before news of her split — urging governments to share the Covid-19 vaccine.

Bill and Melinda with their children Jennifer, Rory and Phoebe[/caption]

Most are now focusing not on the personal spoils between the couple — but potential repercussions for the foundation, which gives away roughly £3.6billion each year.

Rob Reich, a professor of political science at Stanford University, told the New York Times: “The Gates Foundation is the most important and influential philanthropic entity in the world today.

“The divorce may have huge repercussions for the foundation and for its work across the globe.”

Meghan, who welcomed Lilibet in June this year, said that although the couple were “overjoyed” with…