And the curse surrounding the mega-rich dynasty has struck again, with the death of John Gilbert Getty, aged 52.

The curse surrounding the Getty family has struck again, with the death of John Gilbert Getty[/caption] 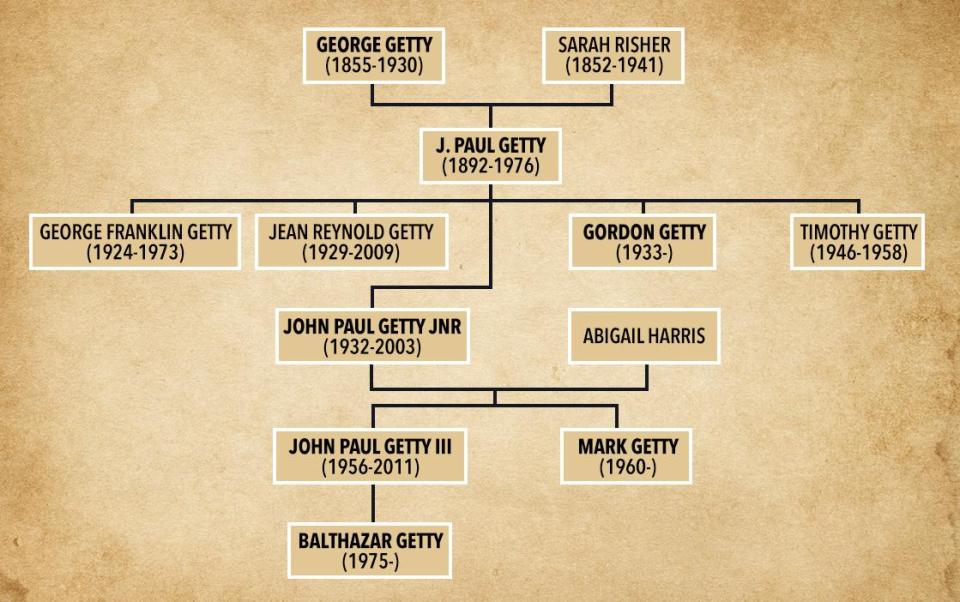 The head of the dynasty was J Paul Getty, who struck rich in the oil industry in 1916[/caption]

The long-haired, tattooed grandson of oil tycoon J Paul Getty, and one of the heirs to the family’s £3.75billion fortune, was found unresponsive in a hotel room in Texas.

A family statement said: “He was a talented musician who loved rock and roll. He will be deeply missed.”

He leaves one daughter, Ivy Love Getty, who posted memories on Instagram about her dad’s love of rosé wine and how he would put ice cream in the fridge for 30 minutes before he would “drink it like soup”.

Ivy, 25, who said she was proud to be the only “consistent” woman in his life, wrote: “My father was awesome — the coolest man to ever land on this planet and I will forever be the proudest daughter.”

John was the son of composer Gordon Getty, 86, who has now lost his wife and two of his seven children within five years.

In 2015, John’s brother Andrew died aged 47 from an intestinal haemorrhage.

He was found to have a toxic level of methamphetamine in his system. Two months ago, Gordon’s wife Ann passed away from a heart attack, aged 79.

STABBED HIMSELF IN THE CHEST

The latest death on Friday last week is part of the long and sorry saga of the Getty clan, which includes the 1973 Mafia kidnapping of a 16-year-old John Paul Getty III.

His grandad J Paul refused to pay the ransom of £12million (equivalent to £70million today) so the Mob cut off John Paul’s ear and sent it to a newspaper in Rome.

Renowned miser J Paul eventually coughed up, but only after the US government negotiated a ransom figure of about £1.6million, the maximum that would be tax deductible.

After his release, John Paul fell into drug addiction and suffered a stroke which left him paralysed[/caption]

Even then, he ordered John Paul’s father John Paul Getty Jnr to repay him at four per cent interest.

The kidnapping was the subject of Ridley Scott’s 2017 movie All The Money In The World — and it seems even that film could not escape the Getty curse.

Actor Kevin Spacey was cast as J Paul, but had to be replaced after filming came to a close when sexual abuse allegations broke. His scenes were then re-shot, with Christopher Plummer taking over the role.

J Paul’s road to fortune began in 1903, aged 11, when his father George, a lawyer, moved the family to Oklahoma in the hope of striking it rich with oil.

And strike it rich they did. In 1914 George lent a 21-year-old J Paul 10,000 dollars to make his own investments. Within two years he had made his first million.

Thanks to shrewd early investments in oil-rich land between Saudi Arabia and Kuwait, he was named the richest man in America in 1957.

The Guinness Book Of Records named him as the richest private citizen in the world in 1966, with wealth of approximately £6billion in today’s terms.

But the sheen was already coming off America’s golden family.

Dad George had fallen out with J Paul over the younger man’s womanising.

J Paul married and divorced five times in his life — with three of those coming in the 1920s alone. He had five sons in total.

In 1959, J Paul moved the family to the UK, buying Sutton Place, a 16th Century Tudor manor house in Surrey.

Visitors there could admire the Rembrandts and Renoirs on the walls, but had to use a payphone to make calls.

J Paul died at Sutton Place, aged 83, in 1976, surrounded by his mistresses and dogs, but not a single family member.

He left a large slice of his £4.2billion estate to the Getty Art Museum in Los Angeles.

Of J Paul’s four other sons, one died after a suspected suicide, one had a secret second family and another fell into drug and booze addiction.

An inquest in LA found he had overdosed on barbiturates and alcohol and stabbed himself in the chest.

In Danny Boyle’s American TV drama, Trust, about the family, George is seen staggering away from a pool party at his Bel Air mansion, locking himself in the garage and stabbing himself with a barbecue fork.

According to J Paul biographer John Pearson, George had been taking drugs and on the night of his death had argued with his wife about his father, who George was said to be scared of.

Pearson wrote: “Their rows were almost always over Mr Getty.

After her death he spiralled further into addiction, but he turned his life around and went on to be knighted[/caption]

“At the end of the row, he flipped. All the frustrations, hatreds, impotence and rage surfacing in one great wave of anger and he panicked.”

A month after his death, his nephew John Paul Getty III was kidnapped.

In an interview with Rolling Stone magazine after his release in 1974, John Paul said he never thought his grandfather would cough up.

He explained: “Because of the way he is. Besides, I realised I would probably do the same thing.

“Because I don’t believe that somebody should work for 60 years to make his money then have some little criminal who’s too lazy to get a job take his money.”

It was five months before the Mafia released him. Afterwards, John Paul fell into drug addiction and suffered a stroke aged 25, leaving him paralysed in all four limbs, partially blind and unable to speak.

BOTTLE OF RUM AND HALF GRAM OF HEROIN A DAY

In 2008 he had an affair with actress Sienna Miller, which resulted in a two-year separation from his wife Rosetta, the mother of his four children.

J Paul had second son, J Ronald Getty, with third wife Adolfine. They only lived together for a few months before she returned to her home in Germany and gave birth there.

Ronald’s granddaughter is Isabel Getty, who is regularly seen living it up on the London party scene.

The singer is a double heiress as her mum Pia is the daughter of duty-free billionaire Robert Miller.

Third son, John Paul Getty Jnr, the father of kidnapped John Paul, enjoyed the excesses of the Swinging Sixties, at one point having a bottle of rum and a gram of heroin a day.

His second wife, actress Talitha Pol, died of a heroin overdose in 1971, aged 30.

Afterwards, John Paul Jnr spiralled further into addiction and became estranged from his father. However, he turned his life around and was knighted for his philanthropy before his death in 2003, aged 70.

Fourth son Gordon took control of the family business after the death of J Paul. But his passion was music, not oil, and in 1986 he sold Getty Oil to ­Texaco for £7.5billion.

Gordon is worth £1.6billion, putting him in the richest 400 Americans, according to Forbes magazine.

The 86-year-old has composed several operas and has donated £150million to the Ann And Gordon Getty Foundation charitable trust, which he established with his late wife. The pair had four sons together.

His secret family only came to light in 1999 when Cynthia went to court to apply for her daughters to take the Getty surname and claim a share in the family fortune.

When the scandal broke, Gordon wrote in US media: “Nicolette, Kendalle and Alexandra are my children. Their mother is Cynthia Beck, and I love them very much.”

ALL WIGHT FOR SOME

In April this year police discovered a stash of 1,000 firearms — including antique US Civil War weapons, shotguns and handguns — at one of Cynthia’s LA properties. Cynthia does not live at the mansion, and is thought to lead a reclusive life in Europe.

In July, her former companion, Girard Damien Saenz, 57, with whom Cynthia owned several properties, denied 64 felony counts for his alleged role in what was one of the largest weapon seizes in LAPD history.

It is just one more twist in the Getty family saga — a story that’s certain to have a few more surprises to come.

"Not Afraid": Japanese Billionaire Yusaku Maezawa Ahead Of ISS Launch

A DESPERATE mum told how her baby girl spent her first birthday on a ventilator over “damp and mould” in her home.…

CHILDREN are known to push the barriers, or maybe take things further then they should – it is all part of growing…

Prince Harry and Meghan Markle are at risk “diluting their brand,” according to royal experts. This comes after the couple joined Ethic,…

Desperate hunt for missing doctor, 44, who ‘vanished without trace’ eight days ago after walk at NYC park with mom

CHILDREN are known to push the barriers, or maybe take things further then they should –…

Prince Harry and Meghan Markle are at risk “diluting their brand,” according to royal experts. This…