JAKE PAUL has his sights set on facing Conor McGregor – in a fight that could earn the UFC star MORE than the initial $50million offer by 2022.

After the YouTube star left ex-NBA player Nate Robinson knocked out and into a viral meme, he has since put all his efforts into pursing McGregor.

McGregor has been relentlessly called out by YouTuber Paul [/caption]

Paul, 23, even claimed to have sent the Irishman a cheque worth $50m in an attempt to prove he is the real deal.

But McGregor, 32, appears more interested in his return to the UFC, which he will mark against Dustin Poirier, 31, on January 23.

And Paul’s assistant trainer J’Leon Love is in no rush to throw the 2-0 upstart straight into the mix with the former two-weight UFC champion.

Instead he is happy to let the fight build and become more lucrative – while also giving Paul the chance to gain further experience in the ring.

“Maybe we have one or two in the earlier year and then maybe fight again at the end of the year, check out and 2022 have a big year.

“If we can throw Conor McGregor in there? S*** that would be solid, as Jake would be a solid boxer by then.

“Like I said, no rush, it’s good to talk about it, it’s good with the antics, it builds something up. 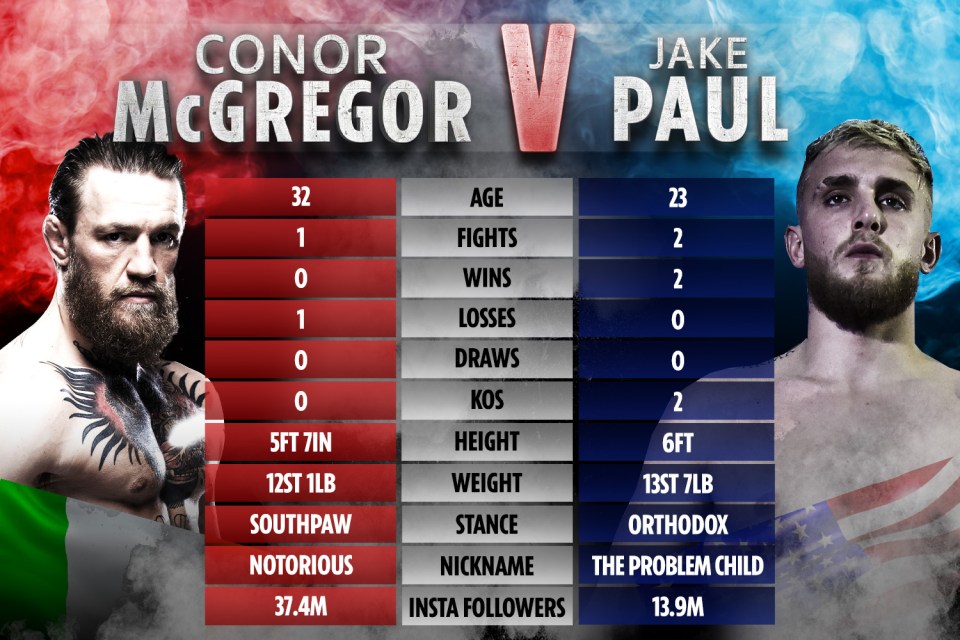 “It’s all about making the right moves, but we have something really solid here and people are hating on it. But it’s something new and if you stick to the old it stays old.”

Love is a veteran of Floyd Mayweather’s Las Vegas entourage, and considers the American legend and close friend and mentor.

And he watched as Mayweather, now 43, made north of £300m for beating McGregor in round ten of the southpaw’s boxing debut in 2017.

Love is adamant the skill disparity between Paul and McGregor favours his man when stripped down to only the sweet science.

He said: “I think a fight with Conor McGregor would be a good chess match.

“It will be a decent chess match and from that on who has the better boxing experience between the two? Jake Paul.

“Conor only has one fight, with the greatest, but one fight.

“I know Conor McGregor’s is more stand up in MMA, he can kick well, he has a really good left hand.

“But I think if we can take that left hand away, which I am really good at breaking down, then we have a one-armed fighter and we’ll kill him any day.”

Paul became public enemy No1 after he called out McGregor by labelling him an ‘Irish c***’ and even went after his fiancee Dee Devlin.

But Love insists fighters should take a leaf out of the internet sensation’s book and risk the wrath by making a name for themselves online.

Mayweather sold 29MILLION pay-per-views in his historic 50-0 career – as fans flocked to watch him either win or lose.

And Paul is following the same marmite approach as he banks on his equally loyal following of fans and haters.

“What he brings, if you take the blueprint of his marketing strategy you can really uplift you’re game, he’s the most talked about fighter with just two fights.

“Whether it’s bad or good everybody’s talking about him, wanting to see him fight.”

A TEEN Satanist who stabbed two sisters to death in a park was today jailed for life. Danyal Hussein slaughtered Bibaa Henry,…

GEREMI has unveiled a blueprint to save former club Newcastle from the drop. The Magpies are languishing one place off the bottom…

Why is New Forest exempt from Tier 4 restrictions?

GEREMI has unveiled a blueprint to save former club Newcastle from the drop. The Magpies are…

The first teaser trailer for Pixar’s upcoming Toy Story spin-off movie Lightyear is now out, and…