The singer, 36, got her New Girl actress doppelganger, 40, to play her in the futuristic clip for her song, Not The End Of The World.

The video kicks off with Katy pushing her four-month-old baby daughter, Daisy Dove – who was born in August – down the street in a pram.

Zooey, meanwhile, sits on a bench nearby reading a newspaper.

Aliens intending to save Katy from “the end of the world” mistake Zooey for the Teenage Dream singer and accidentally zap her onto their spaceship instead.

“Are you sure that’s her?” one alien says to another, before they all start chanting, “Katy! Katy! Katy!”

The actress is dressed up in Katy’s iconic looks [/caption]

A bemused Zooey explains: “No, no, no, sorry… misunderstanding. I’m Zooey!”

Her clarification is quickly swept aside by her intergalactic buds, who are convinced she is the I Kissed A Girl hitmaker.

They dress Zooey up in Katy’s most iconic looks, from cupcake bras to lollipop accessories and even dye her hair electric-blue.

The clip – which was directed by Similar But Different – is for Katy’s Smile album, which dropped in late August.

She coos at her daughter in her stroller [/caption]

Katy and Zooey have often been described as each other’s celebrity lookalikes, with some fans also likening both to actress Emily Blunt.

Alongside promoting her new album, Katy is busy being a first-time mom to Daisy, who she shares with her fiance, Orlando Bloom.

Earlier this month, the singer admitted she’s been struggling to get any sleep while looking after the newborn.

Zooey gives in and pretends to be Katy [/caption]

She dresses up in an incredible futuristic outfit [/caption]

She makes an incredible lookalike for Katy [/caption]

“My daughter – she’s such a gift – but there is sometimes a challenge concerning sleep no matter how much support you have.

“But where am I going to get those six hours that I used to get? Where did it go?” 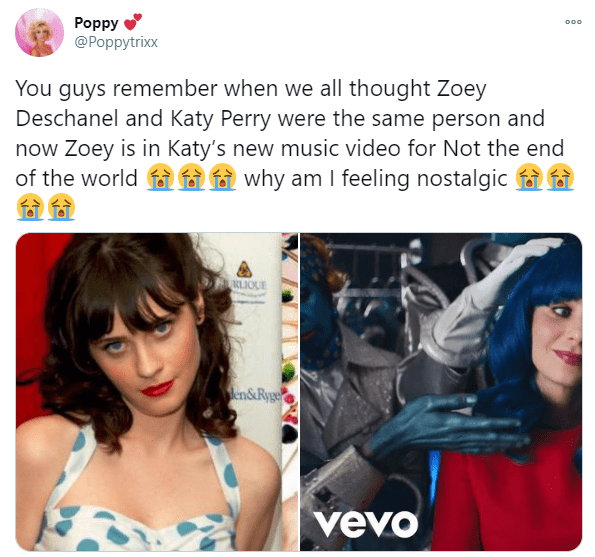 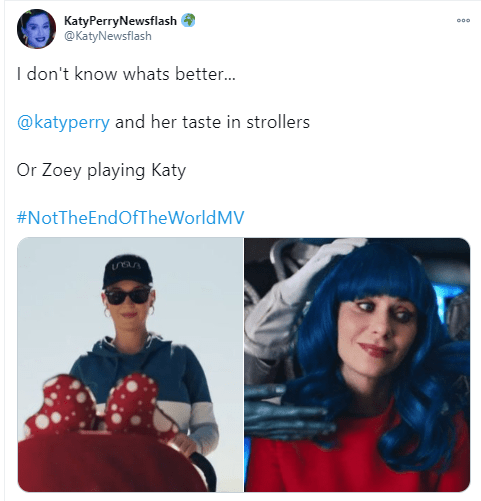 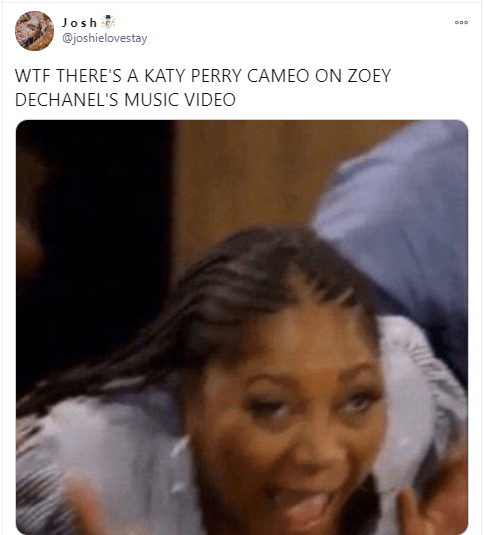 The singer – who recently revealed her trim post-baby body – said she catches up on rest when she meditates.

The Daisies singer said: “There’s been so many different ways [transcendental meditation] has blessed me, but in this particular moment, as a new mother, I take 20 minutes.”

The new mom does have plenty on her plate as she’s also scoping out a new home with Orlando.

Katy and her fiance Orlando welcomed their first child, Daisy, in August [/caption]

'CRYING MY EYES OUT'


Madonna, 62, poses in crop top and hotpants to show off 'beautiful scar' on leg

The actor previously dubbed himself the baby whisperer while talking to Ellen DeGeneres.

The Hollywood star explained that he chants a Buddhist mantra to Daisy that he himself also says each morning when he wakes up.

He said: “So now, I would just walk into her room and she hears my voice, and it soothes her, and when I have her, I sorta just chant in her ear, it’s rather sweet.

“And Katy’s like, ‘what?’ It’s like I’m a baby whisperer, so I’m definitely winning the daddy points.”

Watch out Spotify! Apple just revealed a cheaper way to stream music to your iPhone

Coronavirus LIVE update: Lockdown rules to stay until HALF of Britain is vaccinated