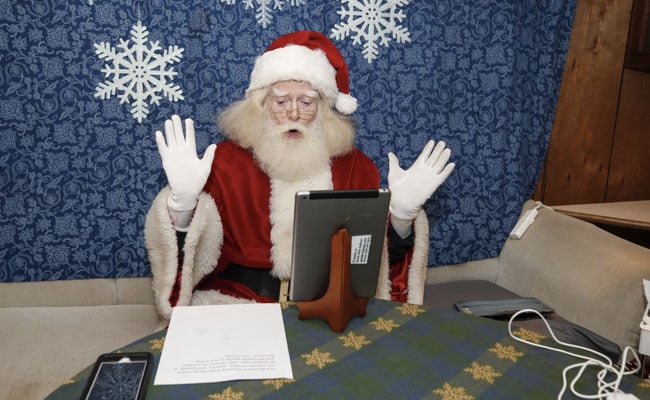 John Sullivan, an 81-year-old Santa from Streamwood, Illinois, has shifted to all virtual visits.

As the pandemic rages, children’s visits with Santa Claus are going virtual — to protect both them and the men in high-risk groups who dress up as old St. Nick.

“I’m not fooling around with the pandemic,” said Joe Harkins, an 87-year-old Santa from Jersey City, New Jersey. “I’m not going to risk my life for any family or public events. It’s just too risky.”

Harkins, like many of his brothers-in-red, as many Santas refer to each other, has taken his winter gig online, opting to swap in-person visits for virtual ones.

He has even gone so far as to start a company called Santa Encounters where prospective Santas can sign up to make personalized videos for children.

“By definition, most Santas are in the most high-risk category either by age or underlying medical conditions,” said Ric Erwin, head of the California-based Fraternal Order of Real Bearded Santas.

“This is further compacted by the fact that our target demographic is young children, who are notorious vectors for all things infectious,” Erwin added.

John Sullivan, an 81-year-old Santa from Streamwood, Illinois, has shifted to all virtual visits. This is the first year in his 30-year Santa career that he will not see children in person.

But this comes with the advantage of learning, in advance from the parents, about the kids he will speak to.

“I learn their names, the names of their siblings, what they want, the name of their pet, things like that. So, when I start talking to the kids they are like, ‘Hey, this Santa knows all about me!'” said Sullivan.

“If you’re in a mall where there’s a big line of kids, you don’t know anything about them.”

The pandemic hasn’t wiped out all mall Santas, although it has altered the way many visits are conducted.

Cherry Hill Programs, which runs Santa visits at more than 700 retail locations throughout the US, has made visits with Santa a contactless experience this year.

Guests need to wear masks and make reservations to eliminate lines, Santa and staff have daily health screenings and temperature checks, and children are not allowed to sit on Santa’s lap.

Instead, Santa sits on his high chair with a plastic shield over his face and a plexiglass sheet in front of him while guests are seated on a bench six feet in front of him, facing a masked photographer who then takes a picture. Additionally, the company has rolled out a virtual option as well this year.

‘I miss the hugs’

Keeping the tradition of seeing Santa alive while keeping everyone safe was the motivation for Kathryn Burgess, a photographer from Richmond, Virginia, when she created the “Snow Globe Santa.”

A children’s book explained why Santa is inside a snow globe this year, along with real snow globes that Santas can get inside and see children while keeping safe.

Burgess, who has three children, ages 2, 4 and 6, said she created the story and product in order to save the experience for families.

“I thought if we could get creative, there would be a chance that we could save this tradition,” Burgess said.

Some believe the virtual visits will still appeal to families even after the pandemic is behind us.

“I think virtual visitation is here to stay,” Erwin said.

“There will always be people who want to see Santa at the mall or invite them to their home, but the sheer convenience of virtual visitation, plus the fact that you could invite far-flung family members from all over the world is going to remain an attraction. And let’s face it, even young children are accustomed to interacting online now.”

Yet, for all the things technology enables, there’s something that can’t be made up for, at least until the pandemic is over.

“I miss the hugs and the look on their faces when they are talking to me,” Harkins said. “I miss that a lot. Nothing can replace that.”

US To Allow Covid Vaccine Booster "Mix And Match": Reports

Too early?! Britons divided as John Lewis sets up Christmas display in OCTOBER

A 23-YEAR-old woman has died after she was mowed down in a hit-and-run while walking in West London. Police and paramedics were…

A 23-YEAR-old woman has died after she was mowed down in a hit-and-run while walking in West London. Police and paramedics were…

PARIS SAINT-GERMAIN star Neymar kicked out his team-mate Ander Herrera after being humiliated in training. Some of the squad, including Lionel Messi…

PARIS SAINT-GERMAIN star Neymar kicked out his team-mate Ander Herrera after being humiliated in training. Some…

PARIS SAINT-GERMAIN star Neymar kicked out his team-mate Ander Herrera after being humiliated in training. Some…