GETAWAY passengers sparked chaotic scenes at Heathrow Airport as hundreds of Brits looked to flee the UK ahead of Christmas under Covid lockdown.

More than 40 countries have banned flights to and from the UK and 16 million people living in Tier 4 have been told not to travel, following the spread of a new mutant strain of coronavirus.

But despite the strict restrictions, terminals at Heathrow remained packed last night with passengers desperately hoping to be able to fly.

A total of 71 flights were cancelled yesterday with dozens more expected to be scrapped today.

Some passengers were left stranded at the airport after seeing flights axed with a small number forced to sleep inside Terminal 2.

Others reported Brits not being allowed to board flights to destinations such as Tenerife.

In Italy, the country’s Ministry for Health said it is looking to trace all passengers on a flight from Heathrow to Rome after a couple tested positive for Covid-19 hours after landing.

Seven others who have tested positive since in Italy arriving from Britain in the last week are being kept under observation by Italian authorities over fears they may be carrying the mutant VUI-202012/01 strain.

The new strain, thought to be up to 70 per cent more infectious than the original, was first detected in London earlier this month and has now been identified in at least six other territories around the world.

The alarming spread saw Prime Minister Boris Johnson announce strict restrictions and an order to ‘Stay At Home’ on Saturday, triggering a wave of travel bans across the world. 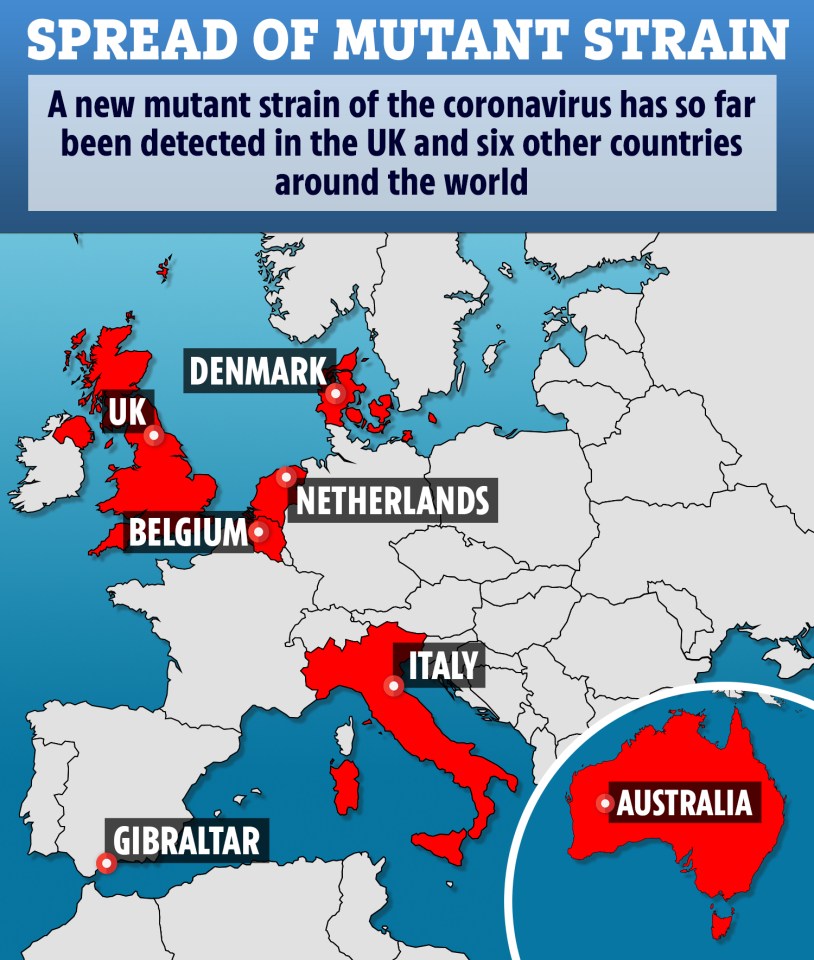 France’s Le Monde newspaper said the strain “concludes a disaster year for the United Kingdom”, while Belgium’s HLN paper said that “chaos looms” for the country.

More than 20 countries across Europe – including France, Germany, and Ireland – have imposed bans, as have Canada, India, Israel, and numerous other countries globally.

France also closed its borders to freight lorries from the UK for 48 hours, a move that it is feared could have a “devastating” effect on the supply of food and other goods in Britain.

The new strain is confirmed to have spread to at least five other places – Denmark, Italy, the Netherlands, Gibraltar, and Australia – but officials have said it is likely to already be circulating in elsewhere.

There have been unverified reports of confirmed cases in Belgium.

Which countries have banned flights from Britain?

The news of the mutant strain of coronavirus spreading in the UK prompted countries around the world to introduce bans on travellers from Britain, including:

Scientists have said that the new mutation – dubbed N510Y – was first identified in Brazil more than eight months ago, but is now spreading faster as part of a “constellation of multiple mutations”.

It has also been said that the new strain has only been identified because of the work being done in the UK to trek variations of the virus as it moves through the population.

But scientists have also said there is no reason to think the new strain won’t respond to the vaccines now being rolled out, nor necessarily any cause for concern until more is known.

Two passengers console each other at Heathrow yesterday[/caption]

A FORMER professional footballer has been found dead in his bath after being electrocuted in a freak domestic accident. Santiago Otero’s wife…

A GUEST at a “disgusting” hotel was left horrified after discovering “blood stained” bed sheets and a “mouldy” shower. They also reported…

Britain's Covid outbreak continues to worsen with another 33,364 cases

Homes have sold for £11,000 less than their asking prices on average during the past year,…

If you have diabetes, or have been told you are at increased risk of type 2…