MANCHESTER AND LONDON TRUST: Tech-targeting manager culls the losers to build up the winners as it invests around the world

Investment trust Manchester and London is a play on the booming technology companies of the US and China.

If an investor wants exposure to the world’s leading tech giants – the likes of Alibaba, Amazon, Alphabet, Microsoft and Tencent – this is an appropriate investment.

The £245million trust is managed out of London by a tight investment team headed by Mark Sheppard who himself owns more than half the shares in the London stock market listed company. 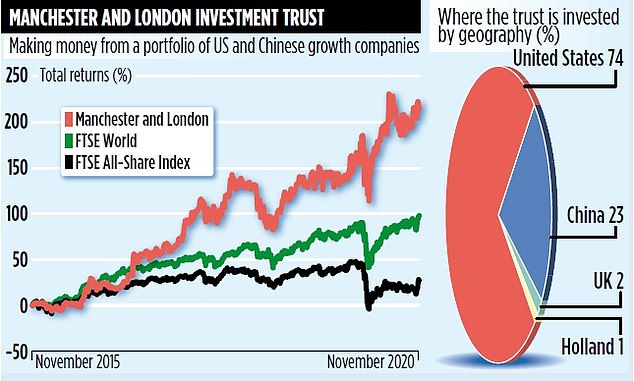 On paper, it makes Sheppard super rich, but the ‘skin’ he has in the trust means he remains very much focused on making money for shareholders.

Sheppard is an unemotional investor with all of his work centred on the regular scrutiny of company financial data.

He only invests in quality businesses – typically no more than 20 – that are in growth mode and whose shares are easily tradeable and rising in value.

He is happy running with winning stocks – and adding to them – while selling companies that aren’t performing up to expectation.

The latest stocks to be removed from the portfolio include European software companies SAP and Dassault Systemes.

Stocks added to include Alibaba, Amazon, Microsoft (the trust’s biggest holding at 14.5 per cent) and Tencent.

‘There are a lot of market myths,’ says Sheppard, ‘and one of them is to buy and then hold. In my opinion, it’s a disastrous investment policy.

‘Once a company is not working for you as an investment manager or investor, it means you are taking on risk and that is unacceptable. So weed out your losers and build up your winners. We have a monthly cull and it’s a good investment discipline.’ 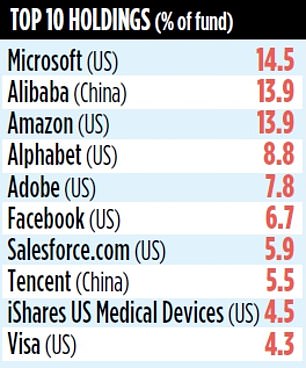 Also, Sheppard is adamant that investing should be an unemotional process.

‘Many fund managers become emotional about the stocks they hold,’ he says. ‘It means they don’t sell when all the market signals, such as profits warnings, are telling them to offload.

Over the past year, it has generated a one-year return for investors of 27 per cent. Over five years, the overall return has been 201 per cent.

Sheppard explains that the fund differs from other tech-focused investment trusts.

For example, he says Scottish Mortgage – the ‘crack cocaine of tech’ – represents a more exciting opportunity because of its exposure to unquoted companies while Herald has a focus on smaller UK tech firms.

In contrast, Manchester and London ‘is focused on mega-listed tech companies that are already making lots of cash’.

‘In some ways, we are more boring,’ he admits. ‘We like big companies whose shares we could sell easily if necessary.’

The trust has nearly a quarter of its assets in China, which Sheppard says will increase its trading, technology and political power over the next decade.

‘Yes, it does frighten me in some ways,’ he says, ‘but I’m hopeful it will not ultimately lead to war between the West and East. China will just become more powerful in its own backyard.’

The trust pays a small dividend, equivalent to 14p a share in the last financial year. Shares closed on Friday at £6.28. Late last week, the trust announced the issuing of new shares which will increase its size. Stock market identification code: 0225847.

How to leave your finances in order after you've gone

GRAB your friends and stay at an amazing mini theme park, which includes a huge four-storey slide. Also at the property is…

VIRGO AUG 24 – SEPT 22 Your family zone finds forgiveness easier, you can lead on this Health demands are easing, and…

APPRENTICE star and vice-chairperson of West Ham FC Karren Brady answers all your careers questions. Today she helps out a manager whose…

GRAB your friends and stay at an amazing mini theme park, which includes a huge four-storey…

VIRGO AUG 24 – SEPT 22 Your family zone finds forgiveness easier, you can lead on…

Just like Meghan Markle and Chrissy Teigen, we’ll never be silent about our miscarriages

BABY loss is still shrouded in secrecy, but more and more women – from Chrissy Teigen…

I miss my pre-baby body, but the new one isn’t so bad — skinny jeans can wait

THE other day on Instagram, I saw a picture that shook me out of my scrolling.…