Airline stocks plunged as travel bans were introduced following the emergence of a new strain of coronavirus. 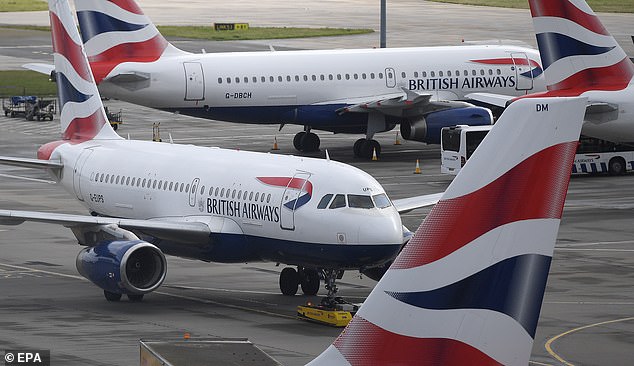 Shares in British Airways owner IAG fell 8 per cent while EasyJet was down 7.2 per cent. Aircraft engine maker Rolls-Royce sank 3.2 per cent

Other travel companies were caught in the sell-off after numerous countries banned travel from the UK amid concerns of a more infectious strain of Covid-19 – cruise operator Carnival fell 5.6 per cent, or 76.5p, to 1295p.

Oil stocks were also hammered as travel bans fuelled fears over demand for fuel, sending crude down 3.5 per cent to $50 a barrel.

Shell’s troubles were evident in a trading update in which it said it is expecting to write down the value of various assets by up to £3.4billion in the last three months of the year.

This means impairments for the full year could rise above the £16.5billion Shell flagged over the summer.  It has been attempting to cut costs, and announced yesterday that it was selling its 26 per cent stake in an Australian gas project for £1.9billion. 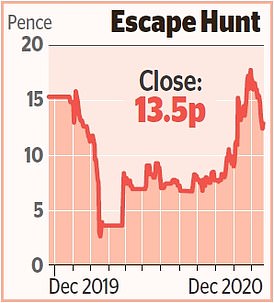 You might be forgiven for thinking Covid-19 would have stumped Escape Hunt, the firm which has sites around the country where teams of friends get locked into a room and solve puzzles to escape.

But the business has managed to claw back ‘significant’ amounts of money by pushing out a range of online games, where teams can participate in a similar experience over the internet.

One firm on the rise was Ocado, which managed to gain 5.6 per cent, or 123p, to 2332p as traders predicted online shopping and panic-buying would take off again.

The rising caution among investors did boost some gold stocks, as the precious metal is seen as a safe haven in times of uncertainty.

Its share price was helped out by drilling results from a new site in Australia, which indicated the area was rich in gold. Managing director Brett Boynton enthusiastically called the results a ‘fantastic early Christmas present’.

Coronavirus has also played into the hands of some medical stocks. AIM-listed Synairgen, which rallied on Friday after being allowed to speed up a trial in the US of its medication which it thinks could treat the disease, climbed another 6.5 per cent, or 9p, to 148p.

And Novacyt, the stellar stock which has rocketed an incomprehensible 6892 per cent this year on the back of its coronavirus tests, was up 10 per cent, or 83p, at 909p after confirming that its tests were still able to detect all known strains of the virus.

Setting aside the pandemic, Metro Bank celebrated its best day in a while after selling a portfolio of its mortgages to Natwest on Friday night.

The £3billion deal, which will see 13,000 Metro mortgage customers transferred to Natwest, reduces Metro’s loan book by 20 per cent and frees up more money for it to spend on more profitable lending.

Analysts at Jefferies said: ‘Investors in Metro should welcome the news, as this removes the near-term need to raise £200-£300million of likely expensive senior debt.’

Fast-fashion giant Boohoo finally has an auditor, after PwC quit in the wake of allegations the company was contributing to modern slavery in its supply chain.

But eyebrows were raised over the replacement, PKF Littlejohn, which is only the seventh-largest accountancy firm in the UK by number of stock market clients.

Google Bullish on Pixel 6 Series, Orders Twice as Many: Report

How the Mail's amazing 30,000 volunteers are helping on the NHS front line

Taiwan’s Foxconn Technology Group, which is a major supplier for Apple and other global brands, has…

The terrifying creature was fairly large, by modern standards, measuring about 3.2ft (one metre) from tip…