A WARNING has been issued about an asteroid hurtling towards Earth which has been deemed the “fourth most dangerous” to our planet.

The European Space Agency (ESA) said the space rock, identified as 2019 SU3, could smash into Earth less than 70 years from now.

Am asteroid, identified as 2019 SU3, could smash into Earth less than 70 years from now[/caption]

The asteroid has been added to the ESA’s Risk List due to its chances of hitting Earth in the future.

Based on the data collected by the ESA, the asteroid’s potential Earth impact might take place on 16 September 2084.

During this time, the asteroid is expected to whizz past Earth from a distance of only 0.00079 astronomical units or roughly 73,435 miles away.

Given this relatively short distance, a slight nudge could easily send the asteroid crashing to Earth, according to the IBI Times.

This can happen if the asteroid gets affected by the gravitational pull of nearby planets.

According to the ESA, the asteroid’s chances of hitting Earth are “one out of 152”.

As well as being on the Risk List, 2019 SU3 is also in the agency’s Priority List, which means the ESA is keeping a close eye on the asteroid’s trajectory.

The news of the new space rock threat came just two days after another asteroid sailed past Earth – and was almost missed by Nasa.

The rogue space rock is the size of two double-decker buses but was only spotted three days before its brush with Earth.

Fortunately, TW1 passed by at a distance of around 351,000 miles, which is nearly one and a half times the distance from Earth to the Moon.

While that may sound far, it’s alarmingly close in space terms. Any fast moving space object that comes within around 4.65million miles is considered to be “potentially hazardous” by Nasa. 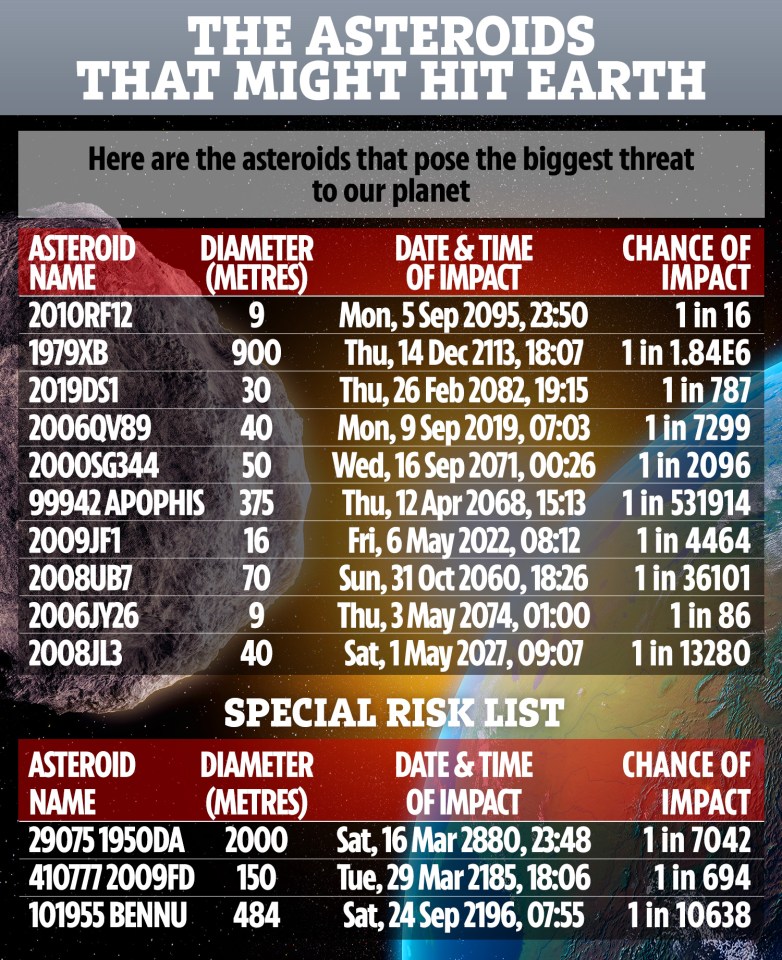 More alarming still is the fact that the rock was first spotted on 5 October – just three days days ahead of its flyby with Earth, according to Nasa’s Center for Near Earth Object Studies.

It was one of seven Near Earth Objects that flew past Earth on Tuesday, although none came as close.

The largest, 2019 RK, is only slightly smaller than the famous Chelyabinsk meteor that detonated over Russia in 2013.

More than 1,500 people were injured by the explosion, with 7,200 buildings damaged by the enormous shock wave it produced.

Fortunately, the objects flying past tomorrow do not pose a threat to life on Earth.

What's the difference between an asteroid, meteor and comet?

Here's what you need to know, according to Nasa…

Nasa believes none of the thousands of NEOs that it keeps an eye on are currently on a collision course with our planet.

“Nasa knows of no asteroid or comet currently on a collision course with Earth, so the probability of a major collision is quite small,” it says.

“In fact, as best as we can tell, no large object is likely to strike the Earth any time in the next several hundred years.”

Even if they were to hit our planet, asteroids of this size would not wipe out life as we know it.

“Global catastrophes” are only triggered when objects larger than 1,000 metres smash into Earth, according to Nasa.


How to spot the Draconids meteor shower in the UK tonight

In other space news, mysterious Planet X may be a black hole that’s ’10 times heavier than Earth but the size of a bowling ball’ on the edge of our Solar System.

Scientists recently discovered a “Super-Earth” 31 light-years away that humans could one day colonise.

And, distant planets may host even more life than we have here on Earth, according to one shock study.

We pay for your stories! Do you have a story for The Sun Online Tech & Science team? Email us at tech@the-sun.co.uk

‘Arrogance will be your undoing!’ Boris Johnson condemned for snub to Farage’s Brexit pact

Xiaomi readying a Samsung Galaxy S11 competitor, here’s what it could look like

MWC – the annual tech tradeshow in Barcelona – is shaping up to be pretty packed next month. Sony, Oppo, LG and Nokia...

Windows 10 update prompts are pestering users every day, but you can stop them

Thankfully, the “Don’t Remind Me Again” option (found in the bottom left-hand side of the screen) will dismiss the warning permanently.Microsoft added this...

But Ba, who played with Lampard during his season with Chelsea in 2013, isn’t shocked his former team-mate is having success improving the...

But Ba, who played with Lampard during his season with Chelsea in 2013, isn’t shocked his former team-mate is having success improving the...

Shirley Ballas health: 'I don’t want them in my body' Strictly...

Amazon Echo: 10 tricks you absolutely need to ask Alexa on...

Xiaomi readying a Samsung Galaxy S11 competitor, here’s what it could look like

Windows 10 update prompts are pestering users every day, but you can stop them