A new online tool reveals how long it will be until different Americans are eligible to receive the COVID-19 vaccine.

With the U.S. Food and Drug Administration authorizing both Pfizer/BioNTech’s and Moderna’s vaccines, healthcare workers and long-term care residents have begun being immunized.

However, the majority of the population will not be able to receive the jab immediately. So where do you fall in line?

Developed by Adriane Labs and the Surgo Foundation, the Vaccine Tool Calculator asks users to enter which state and county they live in, what their age is, what job they have and if they have any pre-existing conditions.

From there, the calculator tells you how many people in your city and state are ahead of you, and how many Americans are in your priority group.

It comes as a Centers for Disease Control and Prevention (CDC) advisory panel voted to make frontline essential workers and adults above age 75 the next groups to receive coronavirus vaccines.

Use the tool down below to find out how soon you can get the COVID-19 jab. 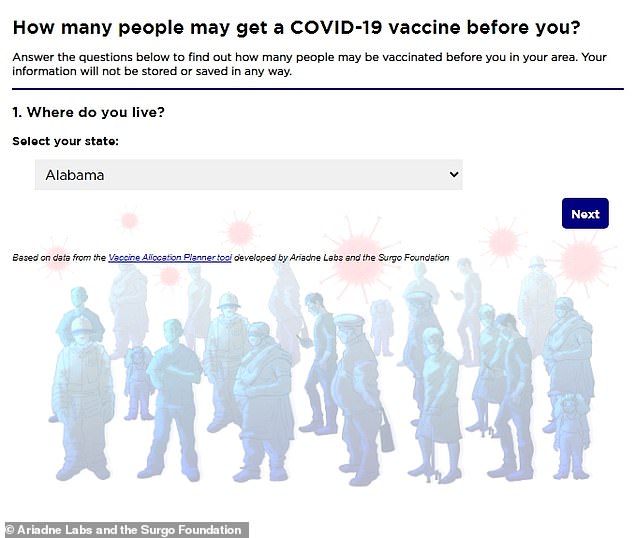 The Vaccine Tool Calculator asks users to enter which state and county they live in, what their age is, what job they have and if they have any pre-existing conditions 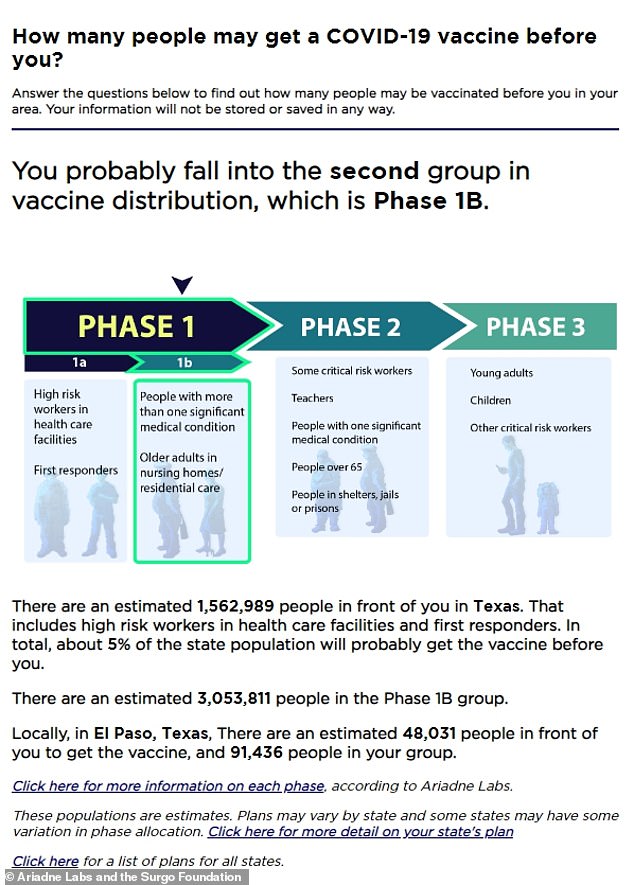 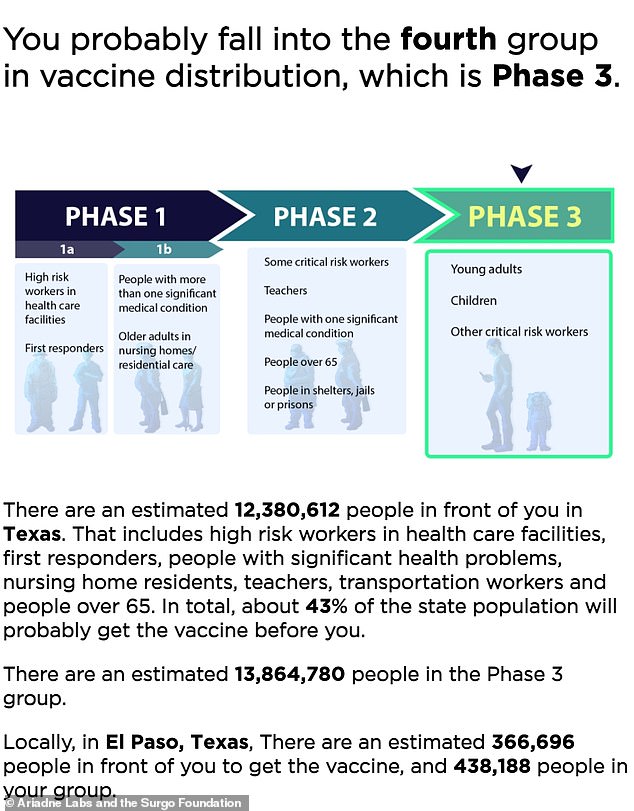 The calculator looks at the size of the population of each state and country and how many people are able to get vaccinated.

Priority groups are those identified by the The National Academies of Sciences, Engineering, and Medicine Framework for Equitable Allocation of COVID-19 Vaccine.

For example, if you are an elderly person with pre-existing conditions living in El Paso, Texas, you are behind 1.5 million people in the state and 49,000 in the city.

Ariadne Labs and the Surgo Foundation add that the tool is just an estimate and what category you fall into may vary depending on state.

On Sunday, a CDC advisory panel recommended frontline essential workers and elderly Americans should be next in line to received a COVID-10 vaccine.

The panel voted 13-1 in favor of the move that, in all, would make 49 million people eligible to receive the vaccine in the next round, known as Phase 1B.

There are about 30 million first responders, teachers, food and agriculture workers, those in manufacturing, the U.S. Postal Service, public transit, and grocery store workers, as well as around 19 million adults 75 and older were included.

All are considered at very high risk of being infected because their jobs are critical and require them to be in regular contact with others.

Phase 1A – inoculating medical workers and those in long-term living facilities, – began this week with about 556,000 receiving the jab, according to the CDC. 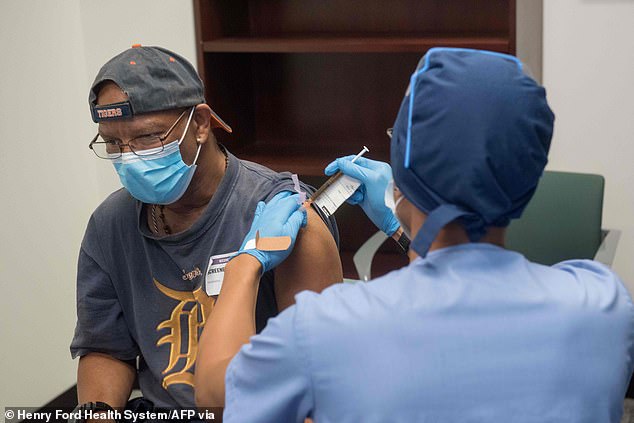 After healthcare workers and long-term care residents, the CDC advisory panel has voted for frontline essential workers and adults above age 75 to get the jab. Pictured: Volunteers are given the Modern coronavirus vaccine in a clinical trial at Henry Ford Health System in Detroit, Michigan, August 5 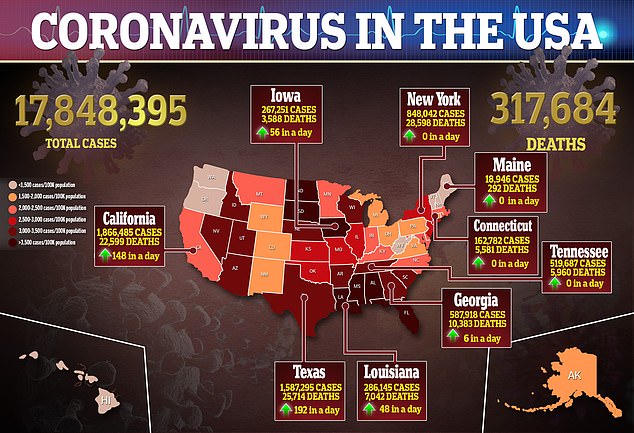 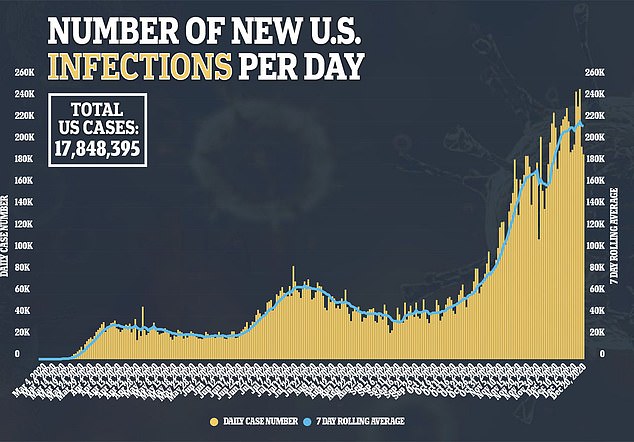 About 24 million people are expected to be given the first round of shots.

The panel also voted that after Phase 1B, the next groups who should be vaccinated are people between ages 65 and 74 – about 30 million – followed by Americans between ages 16 and 64 with medical conditions, accounting for up to 110 million.

After those two groups are another tier of essential workers, such as food service and utility workers, and those working in legal and media jobs. This category encompasses as many as 57 million people.

Differences between state plans and CDC recommendation may also be seen in the ways in which states choose to prioritize sections of the population depending on race.

Although many have been left to believe they will be vaccinated by Easter, President-elect Joe Biden’s surgeon general nominee has said the general public might not get a jab until the summer.

Dr Vivek Murthy’s comments directly contradict those made by health officials from within the Trump administration, suggesting the general public might have access to the vaccine as early as April 2021.

‘I think when it comes to the vaccine timeline, we all want the vaccine to be delivered as quickly, as fairly as possible, and you can be sure that every day and night, myself and others on the Biden team are working toward that end,’ Murthy told NBC on Sunday.

‘But we also want to be realistic about the timeline’.

Up to 4,000 serial killers whose crimes rival Ted Bundy & Zodiac are loose in US & map reveals where they could be

MacBook fans have a hugely exciting few hours ahead as Apple is widely-tipped to launch some all-new laptops at its “Unleashed” event,…

Conservative MP Sir David Amess was stabbed to death while he attended a constituency surgery in Leigh-on Sea, Essex on Friday. A…