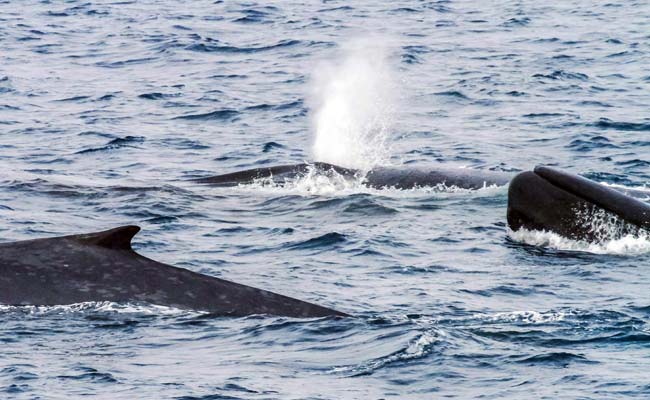 These highly endangered mammals are found around the globe in all oceans. (Representational)

Scientists have found evidence of a previously undiscovered population of blue whales living in the western Indian ocean based on an analysis of sound recordings from the region, an advance which sheds light on the global distribution of the largest animals to have ever lived on the Earth.

While these highly endangered mammals are found around the globe in all oceans, and sing very low-pitched and recognisable songs, the researchers, including those from the New England Aquarium in the US, said every blue whale population has its own unique song.

In a recently published study in the journal Endangered Species Research, the scientists analysed recordings from the Arabian Sea coast of Oman, and as far south as Madagascar, and found a blue whale song that had never been described.

Based on the analysis, the researchers believe they have discovered what is likely a previously unrecognised population of blue whales in the western Indian Ocean.

“It was quite remarkable to find a whale song in your data that was completely unique, never before reported, and recognise it as a blue whale,” said study co-author Salvatore Cerchio from the New England Aquarium.

According to the researchers this population of blue whales was previously assumed to belong to the same that had been studied off Sri Lanka, ranging into the southcentral Indian Ocean.

However, the new study found that the recorded songs in these two regions tell a different story.

“Before our recording effort off Oman, there were no acoustic data from the Arabian Sea, and so the identity of that population of blue whales was initially just a guess,” said study co-author Andrew Willson from Five Oceans Environmental Services LLC.

“Our work shows that there is a lot more to learn about these animals, and this is an urgent requirement in light of the wide range of threats to large whales related to expanding maritime industries in the region,” Willson said

With Brits often having a reputation for being unfriendly, 23 percent set themselves the daily goal of being nice to other people,…

The eldest daughter of Prince Fumihito and Princess Kiko forfeited her royal status to marry her commoner husband Kei Komuro. The couple…

I was single for six years & had a breakdown at 30 – now I’ve found love & have a baby on the way, says Ashley James

With Brits often having a reputation for being unfriendly, 23 percent set themselves the daily goal…

ICONIC SmackDown announcer Greg Hamilton has been axed by the WWE. It follows numerous redundancies by…

The £37billion NHS Test and Trace service has been an ‘eye-wateringly expensive’ failure, a damning report…