The beautiful former UFC fighter left the MMA promotion with a sliding 8-5 record and claimed she could earn 10x more in BKFC. 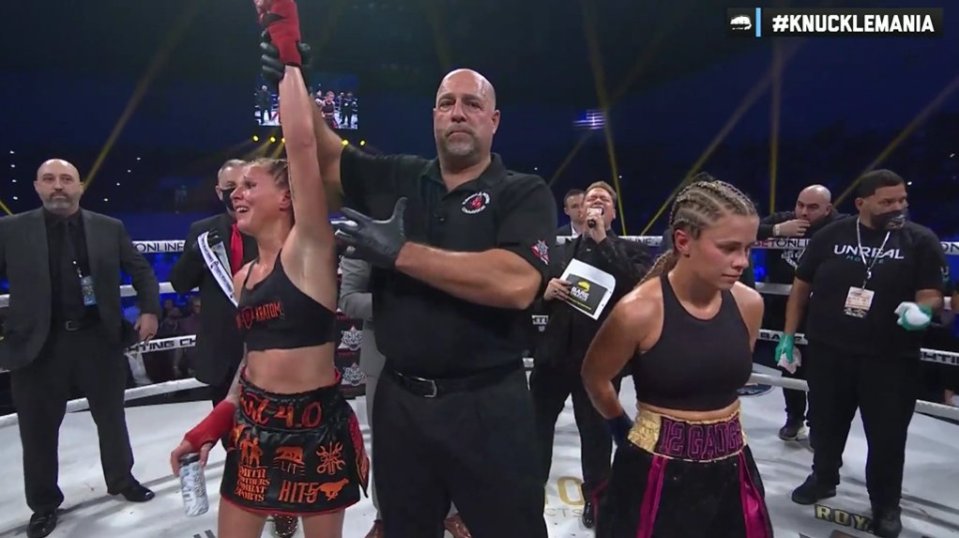 So Saturday night’s bow against underdog Britain Hart was supposed to be a soft welcoming for the bombshell.

But PVZ was bullied in the clinch and not powerful enough with her ungloved punches to get the much-needed win.

But Hart soon sussed that VanZant lacked the tools to hurt her and started to walk her down.

Hart dominated the second-round clinches and a welt started to grow under PVZ’s left eye.

PVZ started that fourth round with some fresh impetus but she was stunned by a little right hand that stopped her flow.


Hearn adamant Joshua vs Fury will go ahead despite Kinahan investigation

Then Hart then smashed a huge right hand into VanZant’s jaw but she somehow swallowed the meaty dig.

Hart’s corner told her, before the fifth and final two-minute round, that she was about to change her life.

And she went out and did it by surviving a late desperate barrage and getting the nod from the judges who all scored it 49-46.

Six Nations 2021: England star Owen Farrell will have the spotlight on him – and it’s his time to shine

What is Dave Grohl’s net worth, when was the Foo Fighters star in Nirvana and who’s his wife Jordyn Blum?

Horoscope: Horoscopes for the week ahead – what's in store for your star sign?

Health bosses have called on people in Liverpool city, Preston and Lancashire to get tested if they have any of the symptoms…

KENOSHA shooter Kyle Rittenhouse, who is hiding in a “safe house,” has fired the attorney who had been raising money for his…

Health bosses have called on people in Liverpool city, Preston and Lancashire to get tested if…

KENOSHA shooter Kyle Rittenhouse, who is hiding in a “safe house,” has fired the attorney who…

Daily Chinese Horoscope Saturday February 6: What your zodiac sign has in store for you today

GEORGE Clooney’s £12million mansion was marooned after heavy rainfall in his picture postcard village. The Hollywood…