THE Professional Fighters League returns to action tonight for the third instalment of their 2021 season. 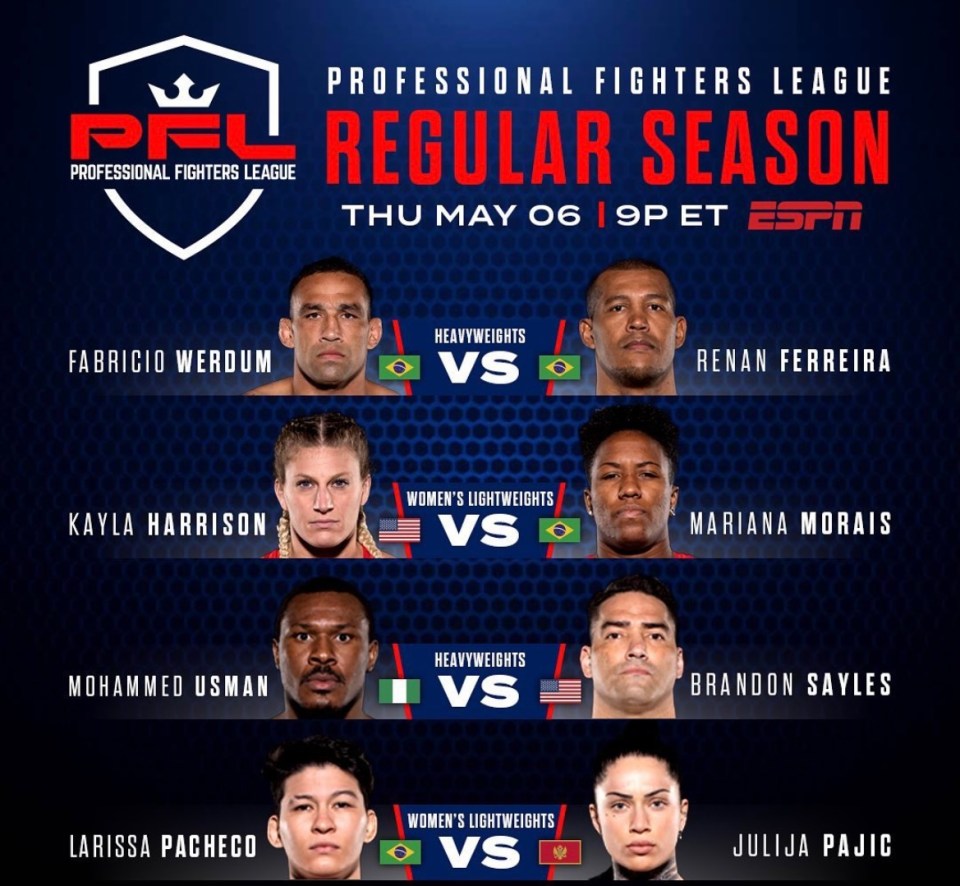 Werdum, 43, will be welcomed to the PFL cage by his fellow Brazilian Renan Ferreira.

In the co-main event of the evening, undefeated women’s lightweight queen Kayla Harrison will be in action against Mariana Morais.

The PFL’s third show in as many weeks will also mark the debut of former Titan FC heavyweight standout Mohammad Usman, the younger brother of UFC welterweight champion Kamaru.

Tonight’s prelims also feature a further two UFC vets in the form of Cindy Dandois and Justin Willis, who will take on Kaitlin Young and Denis Goltsov respectively.

What time does PFL 3 start and where can I watch it?

The first contest of the evening is set to get underway at 22:30pm BT time, with the pay-per-view portion of the card commencing at 02:00am on Friday morning.

Those wanting to watch the main card should head over to www.mmatv.co.uk/pfl to purchase the event’s four fights for a mere £9.99.

CASINO SIGN UP OFFER: CLAIM UP TO £800 IN CASINO BONUS CASH

Who is fighting on the PFL 3 card?


Peter Queally reflects on 'momentum' sucking 2020 ahead of Pitbull bout

What have the stars of PFL 3 said?

Former UFC champion Werdum is relishing his promotional debut, saying: “I want to put one more belt on my wall, my motivation is that I love this.”

Vai Cavalo is expecting a short night at the office, adding: “I see a knockout or submission very quickly, this is my goal.

“PFL has points, I love the rules and I want 6 points. This is why I signed with PFL, I like the idea of 4 fights in a very short time.

Two-time Olympic gold medallist Harrison said: “My confidence, my striking is coming along and I feel more developed as a fighter.

“I’m not afraid to hit or get hit any more and that makes me dangerous.

“Overall I’m a lot more comfortable and at ease inside a cage and that helps me to implement my game even more dominantly which, if that’s possible, is scary.”

MMA TV is the home of mixed martial arts in the UK. Fans can access premium live title fights via pay per view or can subscribe to the entertainment channel for just £4.99 a month, watching anywhere on any device. MMA TV features the top MMA contenders & the most anticipated fights, all in one place.

A HOMECOMING event at Grambling State University ended with one dead and many injured after a shooting on Sunday. On the quad…

Pandora handing £500,000 pay rise to its UK staff as it fights to retain them in the run-up to the vital Christmas…

Pandora handing £500,000 pay rise to its UK staff as it fights to retain them in…