Rates of depression in Britain have DOUBLED since start of Covid pandemic – but fewer people are getting diagnosed, official data shows

The number of Britons suffering from depression has more than doubled during the pandemic, according to official figures that lay bare the devastating impact of lockdowns.

An Office for National Statistics report published today found one in five adults across the UK have experienced some form of depression so far this year compared to one in 10 before the Covid crisis.

The report confirms experts’ fears that more than a year of social isolation, mass job loss and widespread anxiety about the pandemic would take a toll on the nation’s mental health.

Poorer people – defined as those with less than £850 of disposable income – were almost three times as likely to have had symptoms in early 2021 as those with more capital (35 per cent compared to 13 per cent).

About a third of shielders – who were urged to follow even stricter social distancing rules than the rest of the country – experienced depression this year compared to 20 per cent in people with no underlying conditions.

The ONS also said younger people were more likely to feel down, with the number of Britons reporting depressive symptoms decreasing as they got older.A third of under-30s said they felt depressed this year, compared to about one in four in their 40s and 50s, 13 per cent in their 60s and 10 per cent in over-70s.

While self-reported depression rose, a separate report from the ONS found that there was a drop in the number of diagnoses of the condition between the start of the pandemic and August last year.

But this was only because there was a third less GP diagnoses for all illnesses during that time, due to NHS services and staff being redeployed to focus on Covid. Despite the drop, depression actually made up a larger percentage of overall diagnoses last year than pre-pandemic. 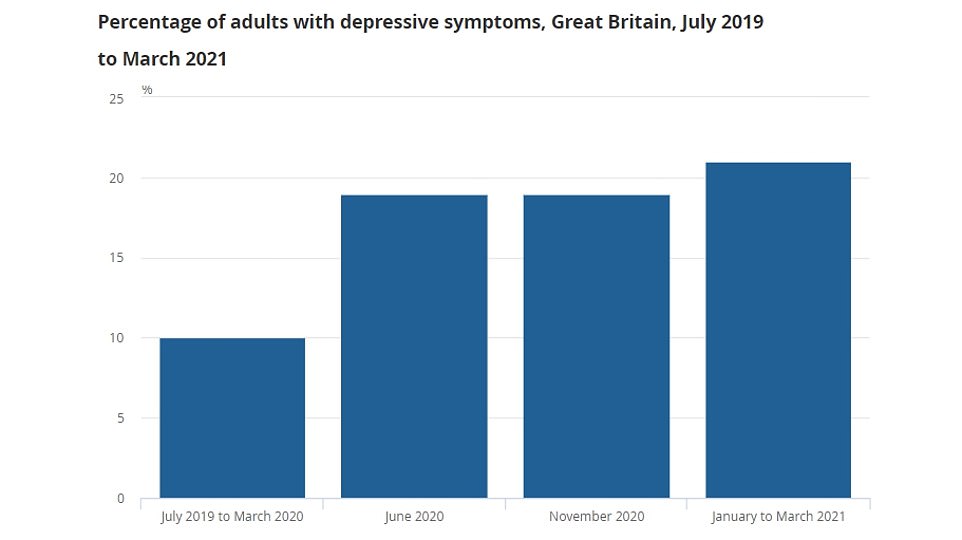 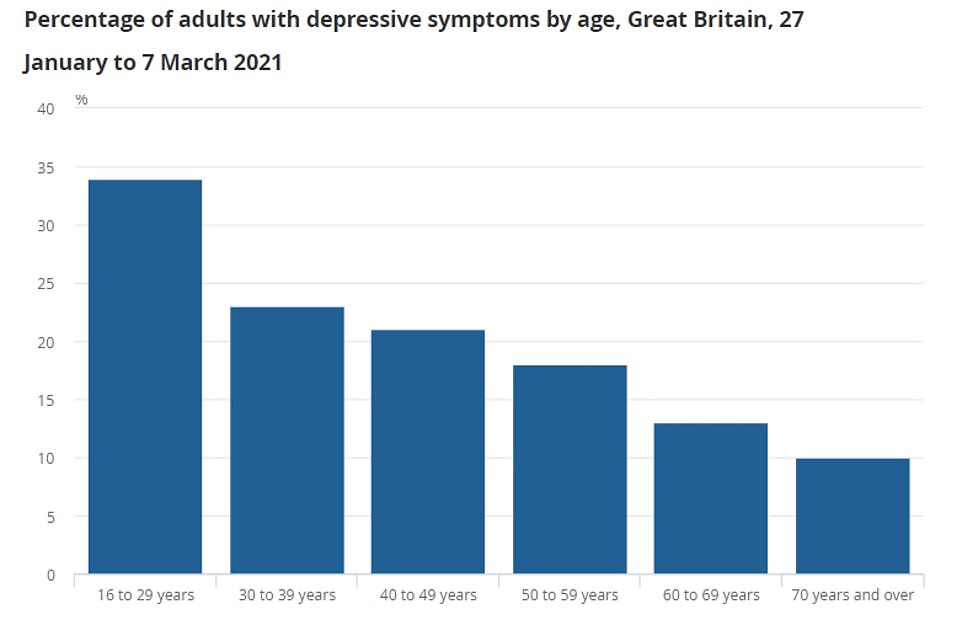 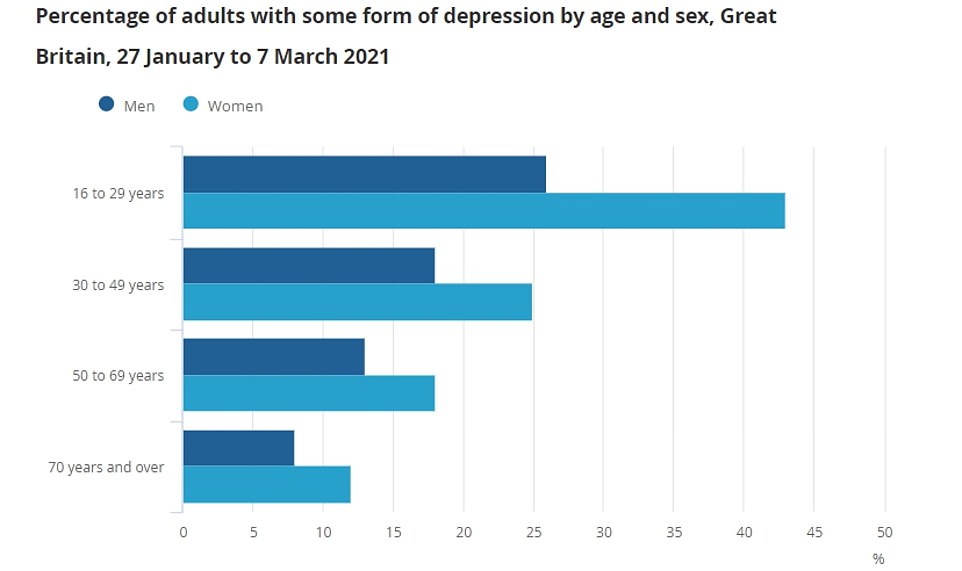 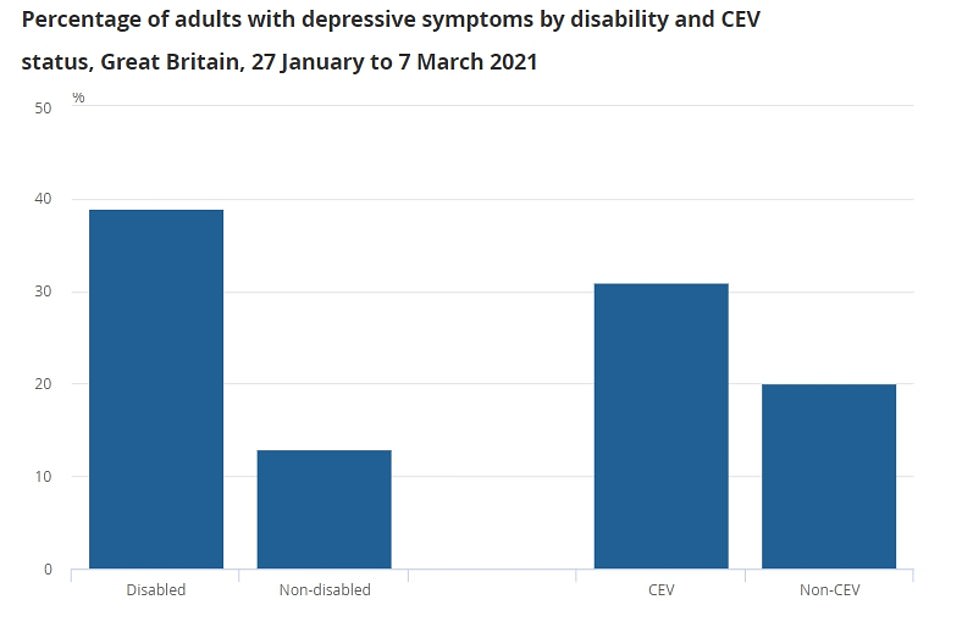 The ONS analysed responses from 23,935 people aged 16 and over in 2021 and compared them to data collected before and during the pandemic. Depression was defined as those with moderate to severe symptoms, and not just a dip in mood.

It found that 21 per cent of people aged 16 and over in Britain experienced some form of depression between January 27 and March 7. This was up from 10 per cent before the pandemic, between July 2019 and March 2020.

Younger adults and women were more likely to experience some form of depression, with 43 per cent of women aged 16 to 29 and 26 per cent of men of the same age experiencing symptoms.

Some 25% of people living in a single-person household experienced depression in early 2021, up from 15% before the pandemic.

For those living in a household with at least one child under 16, the proportion more than tripled – from 6% to 23%.

Some 28% of adults living in England’s most deprived areas experienced depressive symptoms, compared with 17% in the least deprived parts.

Separate ONS figures published on Wednesday show that diagnoses of depression by GPs in England between March 23 and August 31 last year fell by 23.7% compared with the same period in 2019.

Depression accounted for 15.6% of total diagnoses over the period – a rise of 1.3 percentage points.

People living in the second most deprived areas saw an increase of 1.5 percentage points in depression diagnoses as a percentage of all diagnoses.

Theodore Joloza, ONS principal research officer, said: “While the number of GP-diagnosed cases of adult depression has fallen during the pandemic, these cases make up a larger percentage of overall diagnoses than pre-pandemic.

“The picture is one of a rising toll on mental health, with many people not necessarily accessing medical help.”

Australia Approves Covid Vaccine Booster Shots For 18 And Above

United States forcefully criticized Israel for the first time in years on its settlements. (File) Washington: The United States on Tuesday forcefully…

FAMOUS TikToker JinnKid, whose real name is Ali Abulanban, has made quite the name for himself on the social media platform thanks…

FAMOUS TikToker JinnKid, whose real name is Ali Abulanban, has made quite the name for himself on the social media platform thanks…

United States forcefully criticized Israel for the first time in years on its settlements. (File) Washington:…

FAMOUS TikToker JinnKid, whose real name is Ali Abulanban, has made quite the name for himself…

FAMOUS TikToker JinnKid, whose real name is Ali Abulanban, has made quite the name for himself…