2021 is set to be another big year for the UFC, who successfully managed to overcome the crippling effects of the coronavirus pandemic to put on a whopping 40 shows last year.

Conor McGregor will be back in action in late January to take on Dustin Poirier at UFC 257, while future Hall-of Famer Jon Jones is set to make his long-awaited heavyweight debut later in the year.

And, at some point in the year, rising superstar Israel Adesanya will move up from middleweight to challenge Jan Blachowicz for the light-heavyweight title.

Mixed martial arts fans have a plethora of mouth-watering fights to look forward to in 2021. But there are even more prospects to keep an eye on.

With that in mind, SunSport thought it’d only be right to give you the lowdown on seven up-and-comers who are on course to have big years in 2021.


McGregor will KO 'washed up' Poirier in first round, predicts Covington 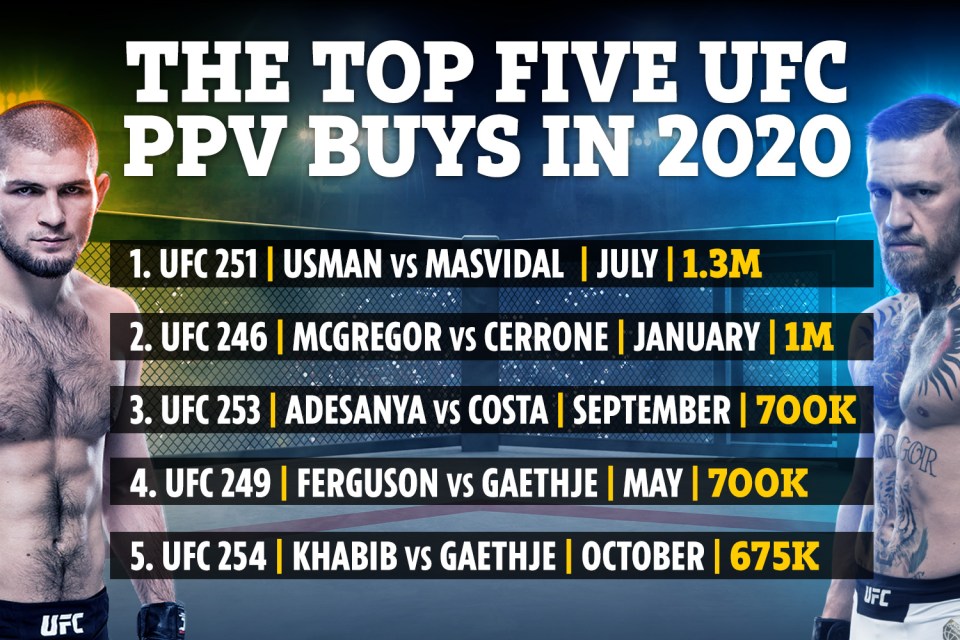 The Irish welterweight was signed by the UFC in late November just hours after the birth of his son. Barry joins the promotion with a 3-1 record to his name, but he has plenty of combat sports experience in the bank.

The 28-year-old is a multiple-time kickboxing world champion and has been competing since the tender age of 11.

‘The Sniper’ is currently under the tutelage of SBG Charlestown head coach Owen Roddy and is set to make his debut against Mike Jackson at UFC Fight Night 185 on January 20.

The game and dogged Jackson is the perfect opponent for the crisp and methodical striker that is Barry to showcase his skill set against and make a lasting impression on MMA fans.

Welsh sensation Mason Jones is undoubtedly the top British prospect to look out for in 2021.

The 25-year-old inked a four-fight deal with the UFC in October after stopping Adam Proctor the previous month at Cage Warriors 116.

Jones enters the promised land of mixed martial arts in the ranks of the unbeaten and with two emphatic TKO wins in his last two outings.

Those unfamiliar with ‘The Dragon’ can expect to see a stone-cold killer who won’t be fazed by the bright lights when he makes first walk to the world’s ultimate proving ground.

Angola’s Manuel Kape joined the UFC’s flyweight roster in March but has yet to make his debut for the promotion.

The former RIZIN bantamweight champion is, however, held in very high regard by the promotion, so much so they had him weigh in as an alternate for this month’s flyweight title between Deiveson Figueiredo and Brandon Moreno.

Kape, 27, enters the UFC in red-hot form having won four of his last five, with three of those victories coming by way of KO or TKO.

The AKA Thailand product fights at a ferocious pace and is a nasty, nasty finisher. The UFC did the flyweight division a real service by signing up ‘Prodigo’, who I have no doubt will make waves in the 125lb division.

Like Kape, the Czech Republic’s Jiri Prochazka was also a 2020 acquisition from RIZIN.

But unlike his fellow RIZIN alum, Prochazka did manage to make his debut this year.

And what a debut it was for the 28-year-old.

The unorthodox light-heavyweight announced himself to the world in July with a brutal second-round KO win over former title challenger Volkan Oezdemir at UFC 251.

Prochazka’s starching of Oezdemir – who is by no means a slouch – has earned him a February showdown with recent title challenger Dominick Reyes.

Be sure to keep an eye out on this fight, folks, as it could very well crown a new contender for the 205lb strap.

I, for one, wouldn’t be surprised if see ‘Denisa’ competing for UFC gold by the end of 2021.

2020 proved to be a frustrating year for featherweight contender Sodiq Yusuff. The Nigerian-born American made one solitary appearance last year, that outing being his UFC 246 showdown with Andre Fili.

After having a lengthy lay-off, ‘Super’ will be champing at the bit to lock horns with the featherweight division’s elite next year.

And if his first four fights in the promotion are anything to go by, fans can expect to see beautiful violence at it’s finest.

The addition of Michael Chandler to this list is a no brainer. The consensus best lightweight outside of the UFC inked a deal with the promotion in September after the expiration of his Bellator contract.

The three-time Bellator 155lb champion has been on the radar of MMA fans for well over a decade, with his wars with Eddie Alvarez living long in the memory.

Chandler will have the opportunity to prove he’s truly one of the lightweight division’s elite next month at UFC 257, where he’ll lock horns with the No.6-ranked Dan Hooker.

Those who have never watched Chandler fight before will be in for a post-Christmas treat.

The NCAA Division 1 All-American wrestler is relentless with his pace and pressure from the outset.

But the veteran doesn’t rely solely on his wrestling to have his hand raised. He also gets the job done with the dynamite he possesses in both fists.

Additionally, when a submission presents itself, the freaky-strong Chandler is a nasty finisher on the ground.

The Cage Warriors alum battled through adversity – and two injuries – to score a decision victory.

Despite still being very green in her pro career, the Dana White’s Contenders Series graduate carried herself like an experienced fighter in her maiden Octagon outing.

The 21-year-old has only shown a glimpse of her overall skill set – which she’s been honing at Team Alpha – and, as such, should be on the radar of every British MMA fan next year.

Adele One Night Only: How can I watch and when does it air?

Royal expert Jonathan Sacerdoti argued that while it is more widely acceptable to be concerned about climate change, there are still risks…

YOU may want to keep an eye out if you receive the Seven of Swords tarot card. The card could mean that…

NEWCASTLE are stepping up their search for a new manager with Steve Bruce reportedly on borrowed time. The new Saudi owners are…

The diver, Shlomi Katzin, discovered the metre-long blade on the seabed along the Carmel coast, the…