Snapchat for iOS has finally got the much-anticipated dark mode, several months after it was enabled by other popular social media apps. The new addition allows Snapchat users — also called Snapchatters — to comfortably view photos and interact with their contacts on the app in with a dark theme. Snapchat had started testing dark mode on its iOS app with a small group of users late last year. And the Santa Monica, California-headquartered company has now rollout the new feature more widely.

As initially reported by MacRumors, Snapchat users on iOS can now use dark mode on their iPhone devices. The company is said to have enabled the new experience for more than 90 percent of its iOS userbase.

To apply dark mode, you need to go to your profile on the Snapchat app and then Settings > App Appearance > Always Dark. The app also has a Match System option in the Appearance setting to let users apply the default iOS system theme. Furthermore, the Snapchat app comes with the default Always Light option to provide the existing light appearance. 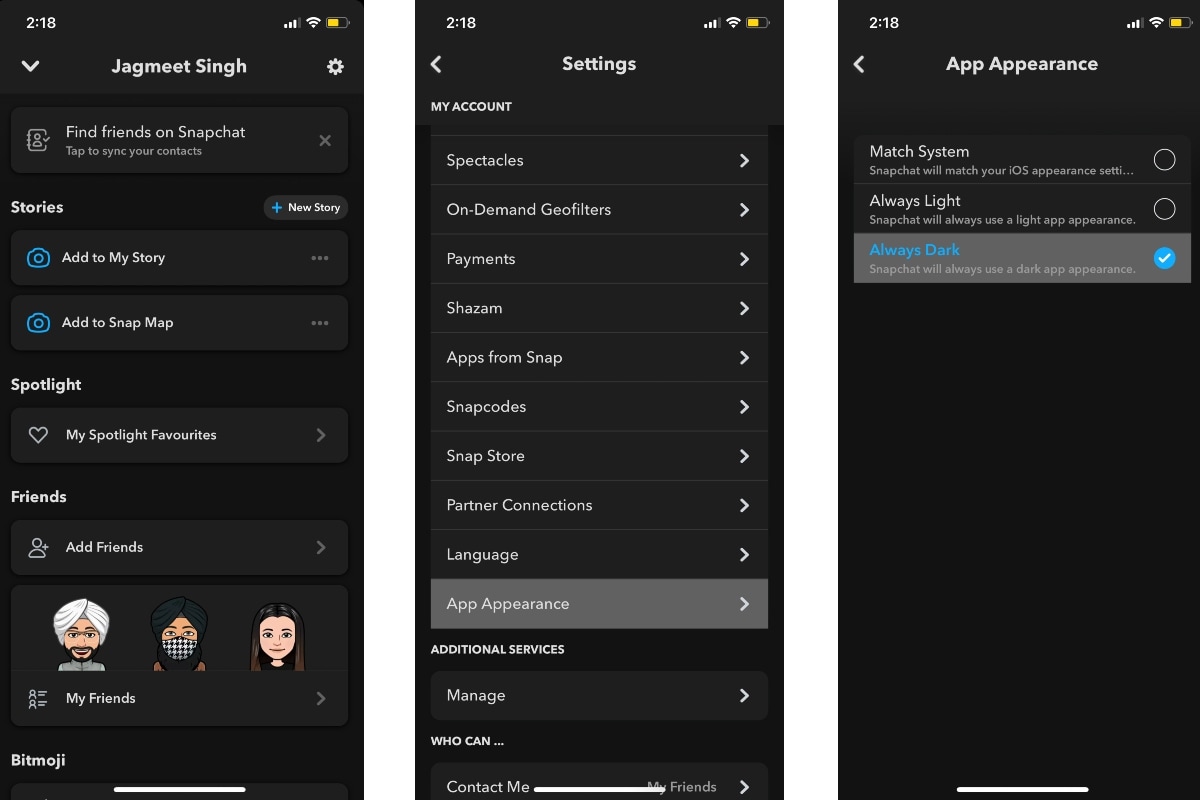 Snapchat for iOS now with a dedicated dark mode

Gadgets 360 was able to spot dark mode on Snapchat for iOS version 11.26.1.35, which is the latest update available for download through the App Store. It is, however, unclear whether users need to install the latest version on their Apple devices to experience the dark mode or if it’s a server-side change.

Snapchat is also expected to bring a similar dark mode treatment to Android users in the coming future. Nevertheless, users can manually force dark mode by going to the developer options on their Android smartphone. XDA Developers has also provided a guide on how users can enable the in-development dark theme on the Snapchat app. Caution is advised.

Unlike Snapchat, Facebook brought a dark mode to its Messenger app in April 2019. WhatsApp also got a dark mode for both Android and iOS users in March last year.

The trend of bringing dark mode support to apps started shortly after Apple released iOS 13 with a system-wide dark mode option in 2019. Around the same time, Google had also introduced a dark theme with the announcement of Android 10.

Is Mi 11X the best phone under Rs. 35,000? We discussed this on Orbital, the Gadgets 360 podcast. Later (starting at 23:50), we jump over to the Marvel series The Falcon and the Winter Soldier. Orbital is available on Apple Podcasts, Google Podcasts, Spotify, Amazon Music and wherever you get your podcasts.

Jagmeet Singh writes about consumer technology for Gadgets 360, out of New Delhi. Jagmeet is a senior reporter for Gadgets 360, and has frequently written about apps, computer security, Internet services, and telecom developments. Jagmeet is available on Twitter at @JagmeetS13 or Email at [email protected] Please send in your leads and tips.
More

Paytm COVID-19 Vaccine Finder Allows Users to Search for Nearby Centres, Get Notified When Slots Open

Watch out Spotify! Apple just revealed a cheaper way to stream music to your iPhone

Why am I tired all the time? 6 signs your fatigue is down to food intolerance

Bitcoin’s price over the past few days has hovered around the $62,000 mark amid anticipation for…