BORIS Johnson has made history by signing off one of the quickest EU trade deals in the bloc’s history.

The PM gave the nation an early Christmas present today with news of his Brexit triumph – meaning the UK will avoid a No Deal in just a week’s time.

Read our Brexit live blog for the latest news & updates

Boris has finally sealed a deal with the EU[/caption] 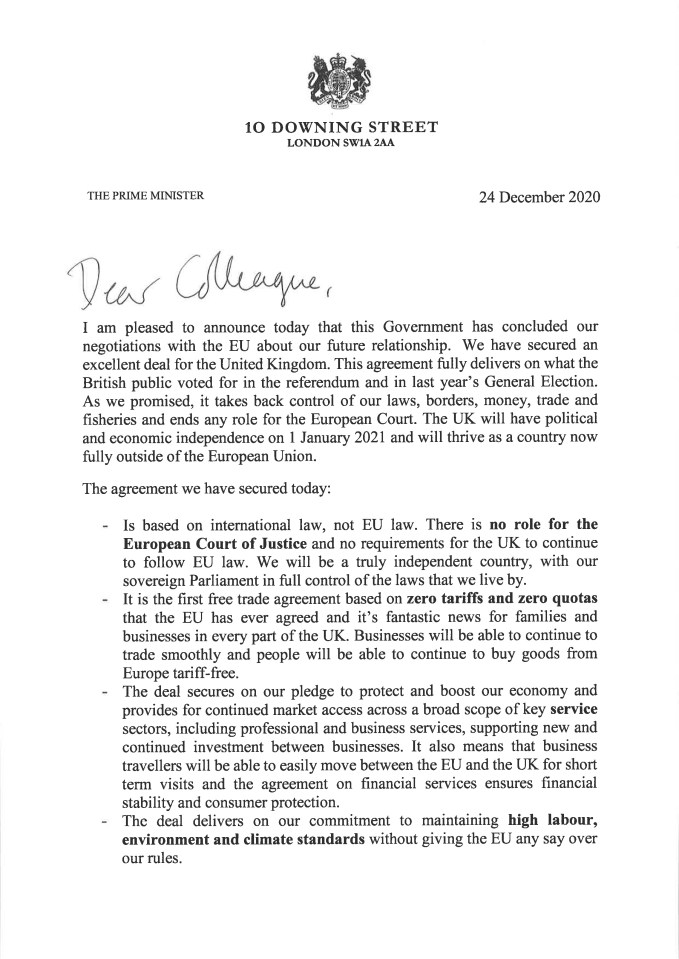 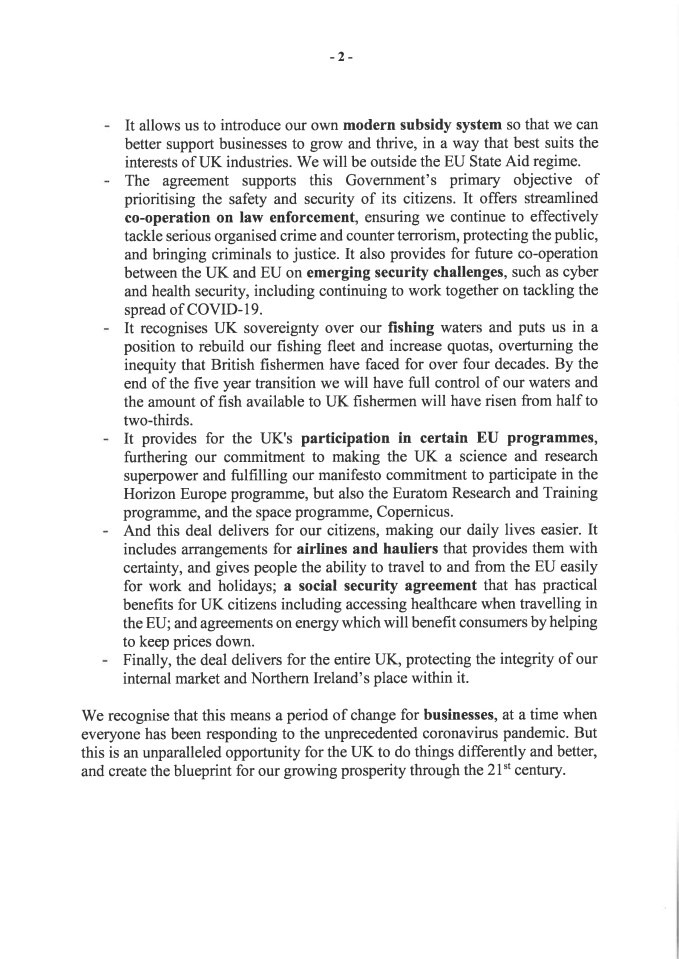 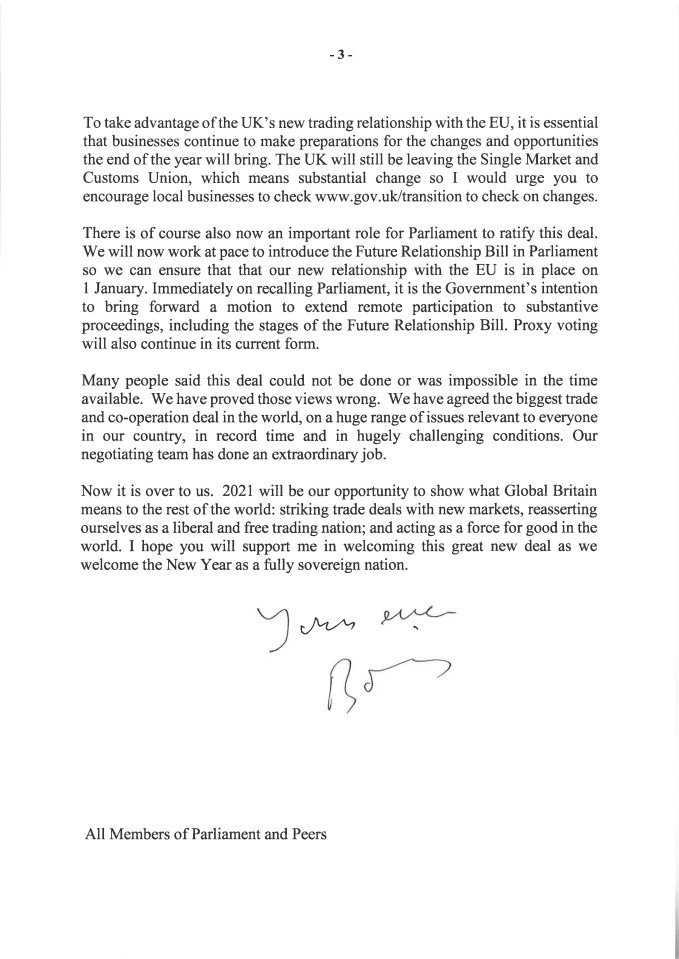 No10 claimed that “everything that the British public was promised during the 2016 referendum and in the general election last year is delivered by this deal”.

They claimed Britain has taken back control of our money, borders, laws, trade and our fishing waters.

So what do we know about what will be in the 2,000 pages of legal text?

It’s not yet been released in full – but here’s what we know so far based on Boris’ letter to Tory MPs, and briefings from the Government.

Britain will leave the single market and EU customs union after the transition period, but will have some access to it.

A source said: “The deal is fantastic news for families and businesses in every part of the UK. We have signed the first free trade agreement based on zero tariffs and zero quotas that has ever been achieved with the EU.

“The deal is the biggest bilateral trade deal signed by either side, covering trade worth £668bn in 2019..”

In his letter to MPs, Boris outlined how the deal is the “first free trade agreement based on zero tariffs and zero quotas the EU has ever agreed”.

The PM said this was “fantastic news” for families and businesses in the UK and will allow people to still buy goods from Europe tariff free.

This means that the prices of goods are likely to stay just as they are now for both sides.

A No Deal would likely have seen extra taxes slapped on goods going in and out of the EU – and may have forced firms to put up prices.

Trade with the EU accounts for 43 per cent of the UK’s exports and 51 per cent of its imports – meaning the deal is vital for both sides’ economies to carry on trading normally.

The deal also means we can sign agreements with other places around the world.

This will provide UK service suppliers with the legal guarantees that they will not face barriers to trade when selling into the EU – and businesspeople can still travel.

Jacques Gounon, chairman of Getlink, said: “Getlink, an authentic bi-cultural group, is very well placed to benefit from this agreement. We thank the negotiators on both sides, who often don’t get the recognition they deserve.”

Most of the rules for holidays and travel into the EU have already been resolved outside of the main Brexit discussions.

Tourists will be able to visit visa-free for 90 days, but will have to secure one after that.

The letter says the deal includes arrangements for airlines and hauliers that “provides them with certainty” and “gives people the ability to travel to and from the EU easily” for work and holidays.

It will also allow a social security agreement – including access to healthcare for Brits when travelling in the EU.

Already a deal has been sealed for people requiring ongoing hospital treatment to get access to it on the continent.

But it leaves the EHIC card up in the air and people should get their own travel insurance just in case.

The deal is expected to say that planes will be allowed to fly in each other’s air spaces after the transition deal ends.

Fishing has long been one of the main sticking points of Brexit – the EU system means that waters are shared and Brits don’t have control over who can come in and fish.

The PM has long promised Britain will become an independent coastal state when we eventually leave EU rules.

And he today insisted he had kept his vow after announcing a deal had been struck after four years of wrangling with Europe.

Speaking at a press briefing where he wore a tie covered in a fish pattern, he said: “For the first time since 1973 we will be an independent coastal state with full control of our waters with the UK’s share of fish in our waters.”

The deal means the UK’s share of fish in its waters will rise “substantially from roughly half today to closer to two-thirds in five-and-a-half years’ time”.

Scottish fishing bosses, however, have branded the Brexit deal “hugely disappointing” – although they are yet to see full details of agreement.

Elspeth Macdonald, chief executive of the Scottish Fishermen’s Federation, said: “After all the promises given to the industry, that is hugely disappointing.

“We expect to be able to study the detail in the coming days and will issue a further statement when we have been able to do so.”

Until 2026 fisherman from the EU will still be able to catch their old quotas.

A huge £100million will be pumped into the industry to modernise their fleets.

Boris said: “I can assure a great fish fanatics we will as a result of this deal be able to catch and eat quite prodigious quantities of fish.”

This was echoed in the letter, with the PM declaring the deal “puts us in a position to rebuild our fishing fleet and increase quotas”.

This means Britain will have “full control of our waters” – but only after the end of a five-and-a-half-year transition phase.

Although this is down from the EU’s ask of a decade.

So until 2026 fisherman from the EU will still be able to catch their quotas.

But after that Britain will be able to decide how much access they can get to our waters.

France crowed on Wednesday that the EU had won “huge concessions” from Britain on access to our fishing waters – but British sources dismissed the briefings out of Paris as posturing.

Emmanuel Macron has been demanding ongoing rights in the UK’s six to 12 mile coastal zone, where French boats land many of their catches.

There will be a £100million deal for fishermen to upgrade and reform their processes, too.

Britain has repeatedly said it wants to take back control of our borders, money and laws.

That means being free to set our own rules in future – and the UK claims it’s won that battle too.

Brussels was afraid we would use this to undercut them on the global stage – and had demanded we stick to EU standards.

It demanded a ‘level playing field’ on issues such as workers’ rights and environmental regulation.

Both parties are expected to have agreed a common baseline deal, where both sides will uphold standards in a range of areas.

Boris’ letter says: “The deal delivers on our commitment to maintaining high labour, environment and climate standards, without giving the EU any say over our rules.”

The EU had previously said if one side raised standards and the other did not, the latter may be punished.

But it appears this has been resolved with an independent mechanism to sort out any rows.

They would decide whether the move was unfair, and whether anyone would face extra tariffs – rather than it happening automatically – another win for the UK.

If the UK or the EU decides to adopt significantly different standards on labour, environmental or climate standards, an independent arbitration panel will consider if this has led to a serious distortion in trade – but EU judges won’t have a say.

If they can prove this occurred over a period of six months or more, targeted sanctions such as tariffs could be applied, the Government said tonight.

And a points-based immigration system will put us in full control of who enters the UK and free movement will end, too.

Boris said today that the UK won’t take part in the Erasmus programme in future – where students can spend time abroad as part of their degrees.

But he announced that they will set up a new Turing scheme – which MPs said would be of better value and would deliver the same benefits for students.

Boris’ letter says that the deal will provide “for the UK’s participation in certain EU programmes, furthering our commitment to making the UK a science and research superpower and fulfilling our manifesto commitment to participate in the Horizon programme, but also the Euratom Research and Training Programme and the space programme, Copernicus.”

A formal review of the arrangements can take place after four years, it was revealed tonight.

If the UK or EU does not believe the system is working fairly, either side will have the ability to bring the agreement on trade to an end.

The UK and EU would then trade on Australian-style terms – aka No Deal.

The European Court of Justice has long been a source of bitterness for many in Britain who feel dismayed we can’t control our own laws.

But now the ECJ won’t have any say in resolving spats between the British and the EU after we leave.

The letter states there “is no role for the European Court of Justice and no requirements for the UK to continue to follow EU law”.

It adds: “We will be a truly independent country with our sovereign Parliament in full control of the laws that we live by” – which will greatly please Brexit-backers.

When quizzed by The Sun tonight, Boris said he was “absolutely confident” the deal “protects our police co-operation, protects our ability to catch criminals and to share intelligence across the European continent in the way that we have done for many years”.

He added: “I don’t think people should have fears on that score, or indeed on any score.”

Writing in the letter, Boris said the deal would prioritise the “safety and security of its citizens”.

And he claimed it offers “streamlined co-operation” on law enforcement to bring criminals to justice.


What is the EU Brexit fishing deal now Britain has control of its waters?


What happens now after the Brexit deal has been done?

But it is not clear whether the deal means Britain could lose access to European security databases.

There are also fears that around 40,000 alerts relating to investigations in other European countries would disappear from the UK’s police national computer on December 31.

This means police investigations could take longer and serious criminals not held to account as quickly.

STREAMING services are working hard to ensure there’s no excuse for boredom – especially with their latest offerings. Whether it’s an intense…

WHEN planning for a life after football, maybe it’s best to think with your stomach rather than your head. That’s what ex…

Holiday rusty families are being warned that airport currency rip-off rules still apply when it comes to exchanging money last minute. Those…

If you haven’t already got a weighted blanket, there really is no better time to buy…