SUMMER holidays in Spain, Greece, France and the US look to be on the cards for Brits as the sunny destinations are set to be added to the “green” travel list by the end of June.

Those desperate to take-off for beach holidays abroad are eagerly awaiting the reveal of which countries they will soon be able to visit without the need to quarantine on their return – but have been urged to be patient before the “big bang” of bookings.

While just a “handful” of countries are due to get the coveted green status from May 17 when the list is announced later this week, a three-weekly review will pave the way for more places to be added.

Holiday hotspot Portugal is on the “cusp” on making the initial list, with an insider saying it would go green “soonish” even if it missed out this time around.

Popular destinations including Spain, Greece and France are pencilled in by Downing Street to be added by the end of June, reports the Telegraph.

A government source said the list will be updated every few weeks to give Brits the chance to get away,

“It’s a rolling, evolving list that is going to start off cautiously but could start to change quickly,” they told the outlet.

“It is not like a one-off list that affects the totality of the summer. It will update and other countries will be added.”

Ministers are also confident that the Caribbean and the US will also be deemed safe enough to be added to the “green” list by the end of June too as vaccination rates rise.

One Downing Street source has implored holidaymakers to be patient before the “big bang for summer holidays” in the weeks to come, reports the Times.

“June will look a lot more like normal, many of the traditional holiday destinations will be on the list by then,” they said. 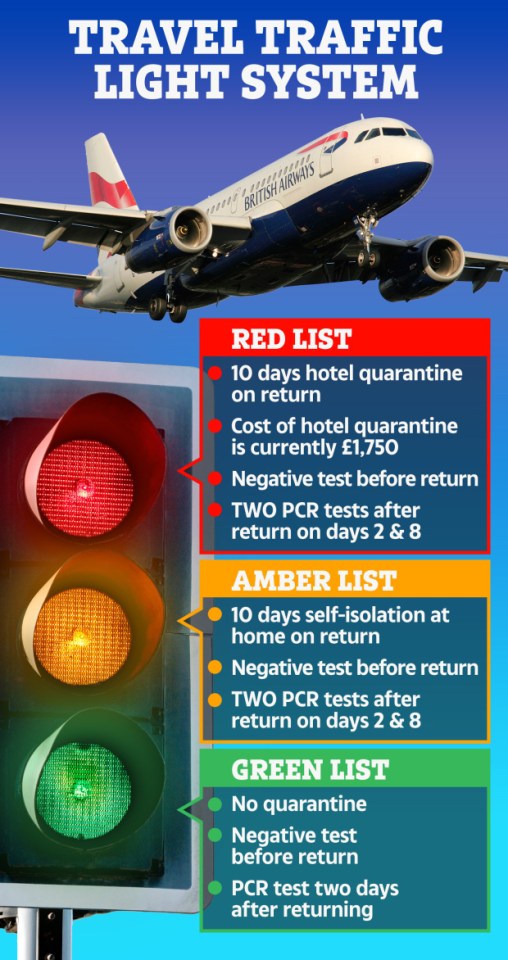 It means holiday islands in Spain and Greece – plus possibly Portugal – are expected to be kept off the “green” list initially – despite reporting fewer Covid cases than the mainland.

With Spain and Greece heading for “amber” status, it means all their islands will too be kept off the approved list, including the Balearics – whose Covid rate is less than a quarter of that of Spain’s – and the Canary Islands, which has vaccinated almost a third of its adult population.

But it’s understood ministers have agreed to create separate travel corridors if needed for European islands to speed up the reopening of borders, according to the Times.

It would mean Brits would have the green-light to travel to islands even if the mainland held “amber” status.

“The approach will be nuanced so we can open up travel faster,” a Whitehall source said.

It comes after the tourism minister for the Balearic Islands, Iago Negueruela, argued it should be considered on a region-by-region basis.

‘WE HAVE GOT TO BE CAUTIOUS’

Boris Johnson is still mulling over the travel “green” list and today said his approach to foreign travel this summer will be sensible and cautious to avoid “an influx of disease”.

It’s understood the list will remain small, and is likely to include Gibraltar, Malta, Israel and Iceland.

During a campaign visit to Hartlepool, the PM told reporters: “We do want to do some opening up on May 17 but I don’t think that the people of this country want to see an influx of disease from anywhere else.

It comes as the UK recorded just one new death today – the first time fatalities have been that low since last summer.

It appears to show the vaccine programme is working, with less serious illnesses resulting in less deaths.

The last time there was a daily deaths figure as low as this was on August 30 last year.

Meanwhile, EU is reportedly planning to let in tourists who haven’t had the jab.

Brussels has offered hope for sunshine breaks after revealing proposals for easing border rules for those with vaccinations – as well as those from countries with low infection rates.

Under current EU restrictions, only people from seven countries, including Australia and Singapore, are allowed to enter the bloc for non-essential reasons.

But new proposals would mean foreign citizens who are fully vaccinated or from countries with a “good epidemiological situation” would be allowed to travel.

The traffic light system of risk will see the world carved up into green, amber or red zones based on vaccine roll-out and case rates, as well as new variants found.

Most read in News Travel


Will Greece be put on the green list for summer holidays?


Most of Europe to reopen to Brits by summer, says Thomas Cook boss


Will Portugal be on the green list for summer holidays?


Holidays abroad 'should be discouraged' due to risk of third wave, MPs warn

Green zones will mean quarantine free travel but tests before and after entry.

Travellers from amber list countries will have to quarantine at home for 10 days on arrival.

Entry from red list countries will be outlawed still, with anyone coming through those countries forced to pay to be isolated in a hotel when they arrive at their own cost.

How fitting a heat pump could LOWER your home's green rating

Explosive Spencer movie shows Princess Diana’s self-harm, bulimia and mental breakdown – but how much is fact?

KRISTEN Stewart’s Princess Diana drama is arguably the most explosive royal movie ever made. The film…