THE teenager who threw a six-year-old boy from Tate Modern has been given extra hail time for attacking Broadmoor Hospital staff.

Jonty Bravery, 19, punched nursing assistant Sarah Edwards in the head and face before pulling her hair, after she said she was going to clean his room.

He then bit Maxwell King, a rehabilitation therapist assistant, on his finger after he tried to help his colleague.

Bravery was being held at the high-security psychiatric hospital on remand ahead of sentencing at the Old Bailey, where he pleaded guilty to attempted murder over the attack at the London art gallery.

He was handed a life sentence, with a minimum 15-year term, in June for hurling the boy from Tate Modern’s 10th-storey balcony on August 4 last year.

The victim, who was on holiday with his parents from France, survived the 100ft (30m) fall, but suffered life-changing injuries – including a bleed on the brain and multiple broken bones.

Today, Bravery appeared at Westminster Magistrates’ Court by video-link from Belmarsh Prison, where he is currently serving his sentence.

He spoke to confirm his name and date of birth before pleading guilty to two counts of common assault at Broadmoor Hospital on January 29.

Chief Magistrate Emma Arbuthnot sentenced him to another 14 weeks in prison and told him he must pay his victims £200 compensation.

She told Bravery: “In my view, what makes this really serious is this woman was quite vulnerable and in a difficult job in Broadmoor.

“It was pretty nasty. She had her back to you when you struck. You punched her face and her head, pulled her hair and took her down to the ground. It was a really horrible attack.

“Other officers came to help, then you bit the finger of the second complainant, Mr King, because he had to come to help her. It’s deeply unpleasant.”

Prosecutor Michael Mallon described Bravery as “somewhat notorious”, telling the court he was taken out his room at Broadmoor on January 29 for some fresh air, when Ms Edwards went in to get him a jumper.

“She made a passing comment that she was going to give his room a quick clean because of the smell emanating,” he said.

The court heard that Bravery shouted “No, no, no”, before becoming verbally abusive and launching the attack.

“He lunged forwards, grabbed her from behind with his left hand and started punching with his right hand around her face and head, around four or five times. She screamed in pain and fear,” said Mr Mallon.

The court heard that Bravery tried to kick the woman and was heard shouting that he wanted to hurt her before other colleagues arrived to help.

The court heard that a chunk of Ms Edwards’ hair was pulled out, while she was left with a lump on her head and needed seven weeks off work.

Andrew Bousfield, defending, said Bravery had been diagnosed with autism and a personality disorder and the offences were linked to his mental disorder.

'GIVE THEM A BREAK'


Kate & Wills defended after 'breaking rule of 6' when meeting Wessexes

“Mr Bravery wants to apologise for his attack. He has pleaded guilty because he is acutely aware of the effect this has had on his family,” he said.

Earlier this month, Bravery dropped a Court of Appeal bid to be moved from prison to hospital, while his appeal against the length of his 15-year sentence was dismissed.

Bravery was in supported accommodation under the care of Hammersmith and Fulham Social Services at the time of the Tate attack and been allowed out unsupervised despite a history of lashing out at staff, his sentencing hearing at the Old Bailey heard. 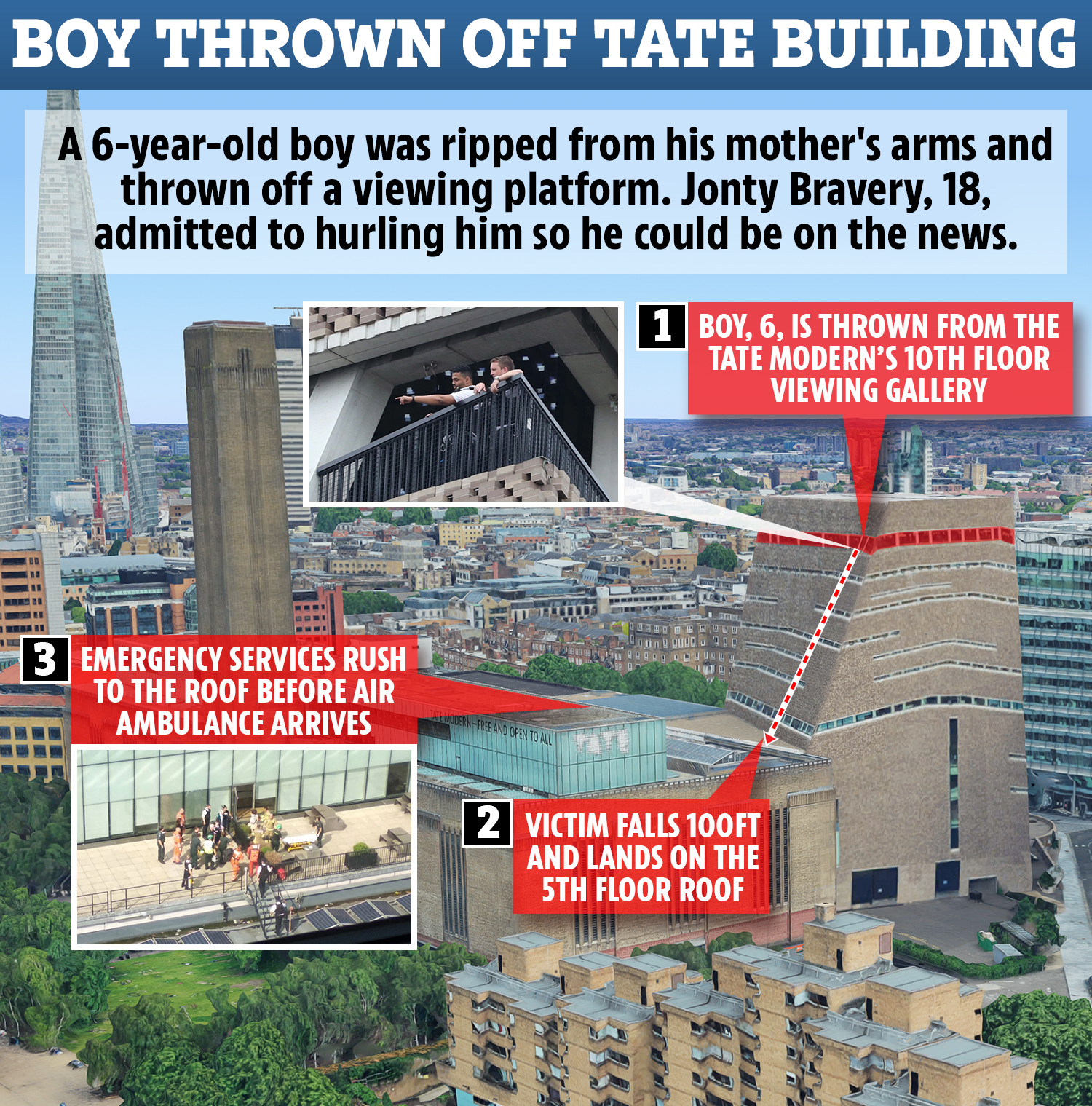 Motley Crue singer Vince Neil, 60, rushed to the hospital after falling off stage during concert

Bill Clinton ‘will be ok’ after 4th night in hospital ICU with ‘sepsis from a UTI’, brother says

CONSERVATIVE MP Sir David Amess has died after being stabbed multiple times at a church in Essex. A man is understood to…

BOXING champ Tyson Fury fears his boxing career coming to an end because training keeps his mental health demons at bay. The…