CHRISTMAS has been cancelled for many people across the country – so The Sun has stepped in to deliver some festive cheer.

For the past four weeks in our Christmas Together appeal, we’ve been asking YOU to help someone who may be feeling lonely.

As part of our Christmas Together campaign, we went out to spread some festive cheer[/caption]

We delivered hampers, goodies and boxes of afternoon tea[/caption]

Our campaign, in conjunction with the Together Coalition and the Royal Voluntary Service, has received support from the Prime Minister, celebrities and, most importantly, from our big-hearted army of readers.

We have been asking you to sign up to the NHS Volunteer Responder programme, run by the Royal Voluntary Service, to run errands for someone who needs help, or to make a simple “check-in-and-chat” call to cheer someone up.

As always, you have stepped up to the plate, with registrations for volunteers soaring by more than 70 per cent in just a couple of weeks.

So it was only right that we should pitch in with spreading some joy too.

Myself and Clare O’Reilly pulled on Santa hats and handed out hampers, goodies and boxes of afternoon tea in West Yorkshire and Plymouth.

We saw at first hand how much a friendly wave, a chat and a small gesture can really lift the spirits of those who have been struggling in the pandemic.

In Yorkshire we were joined by six members of the Yorkshire Imperial brass band, who played carols.

Lynda Felton Scott, 75, from Dewsbury, was thrilled with her doorstep delivery and carols.

The pensioner, who worked as a nurse for 56 years and lives alone with her cat Susie, has received regular help from her local branch of the Royal Voluntary Service over the past few months.

She said: “It was OK in the summer when you could sit in the garden, but now it’s winter I spend a lot of time on my own in the house. 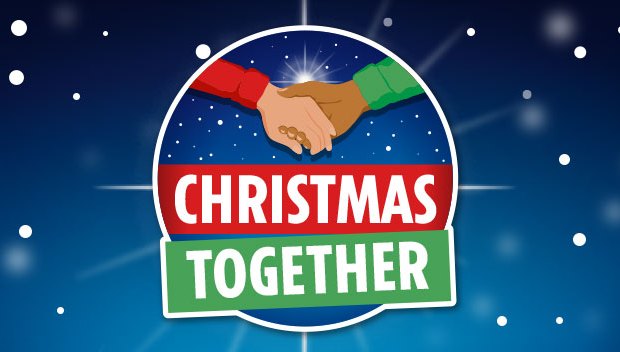 “My neighbour is in my bubble and she comes down to see me, and my son Mark lives nearby.

“But being able to contact the RVS makes a great deal of difference. I used to volunteer for them myself. Whatever I need, all I have to do is ask and I know someone will help.”

Lynda also threw her support behind The Sun’s Christmas Together appeal, in which we have partnered with the Royal Voluntary Service and the Together Coalition, a band of community groups and organisations striving to put an end to loneliness.

After asking the band to play The Holly And The Ivy, she said: “I think it’s brilliant. There are so many lonely people out there.”

Statistics show one in five people won’t see anyone this Christmas, and more than a third of us know someone who will be spending Christmas alone.

Around 4.2million adults say they always or often felt lonely during the second national lockdown.

Over in nearby Birstall, Sandra Yates, 72, said the kind-hearted volunteers who have been doing her shopping have provided a “lifeline”.

The great-grandma, who recently lost her beloved cat Stewart, said: “I’m not in good health and when I was really poorly and couldn’t get out I had a volunteer help me every week. I’ll never forget it.”

I would really encourage anyone to do it. They will get more out of it than they give.

Sandra was thrilled with her goodies, which were donated for our appeal, and said of the brass band: “I adored it. It was absolutely beautiful, I could have listened to it all day.”

The Sun joined volunteer Bilal Mayat, who has been giving his spare time to help the Royal Voluntary Service for eight years.

The supermarket worker said: “In the first lockdown a lot more people needed help with their shopping and with fetching prescriptions. Since the second the priority has been more for companionship.

“A phone call really means a lot to people, even if it’s just half an hour. I enjoy it, that’s why I do it.

“I would really encourage anyone to do it. They will get more out of it than they give.”

Pam Whitby, 79, is a full-time carer for her husband Melvin, 82, who has Alzheimer’s.

She lives in an assisted-living flat in Dewsbury, but despite having plenty of neighbours, Covid restrictions have prevented socialising.

“I speak to my two sons on the phone, but we’re not allowed to mix households here. We’ve just started having bingo and craft sessions but they are limited to five people.

“You don’t even bump into people in the corridors any more because everyone’s staying inside.”

Giving up your time to help someone else is the most noble thing anyone can do.

Pam became emotional as she added: “The volunteers have been lifesavers. Just thinking about all they have done makes me tearful.

“Melvin and I both had Covid. The people here and the RVS, they have looked after us so well.”

In Plymouth we joined the Argyle Community Trust, the charitable arm of Plymouth Argyle FC, which has been organising phone calls, letters, garden gate visits and online sessions for older people at risk of loneliness via its project Tackling Loneliness Together.

Do one favour a day

THIS year I am sure we have all looked loneliness in the eye in some way, as we have all been forced to spend time apart.

So it is more important than ever to encourage open discussion about loneliness, and that is why we are really grateful to The Sun for supporting us in trying to end loneliness through your campaign. It’s hugely relevant at the moment.

Every one of us has the power to ease someone’s loneliness by doing some-thing – picking up the phone, emailing or writing a letter.

We can’t expect everyone to spend hours every day checking in on neighbours, but if we all did one small thing each day, that would make a massive difference.

I have never spoken to a volunteer who hasn’t said they got more out of volunteering than they felt they put in.

So I would say think carefully about what you do, choose something you think you are going to enjoy and trust it will be for the best.

Often just listening is the most important thing.

We have also just an-nounced a further £7.5million funding to tackle loneliness during winter, providing a lifeline to cultural organ-isations, charities and local community groups who are delivering much-needed work to ensure no one feels isolated in their local community.

I know this Christmas will feel very different to normal and we are all facing difficult times. I hope you don’t feel lonely this Christmas – but if you do, I hope you will find ideas about how you can help and be helped. 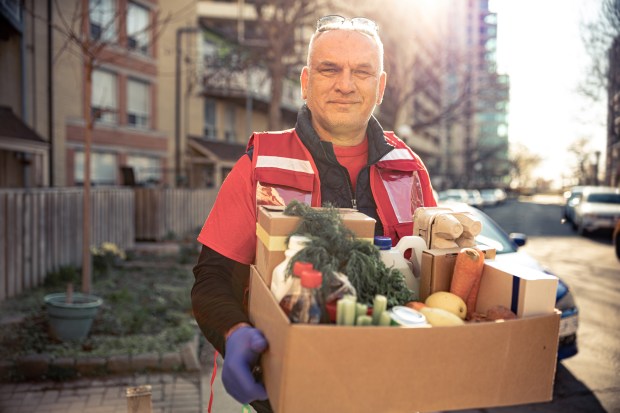 Could YOU reach out to someone struggling and alone to help with shopping or prescriptions?

We can connect you with someone in need through the NHS Volunteer responder programme run by the NHS, Royal Voluntary Service and the GoodSAM app.

Go to www.nhsvolunteerresponders.org.uk/christmastogether to sign up as a volunteer.

Thanks to volunteers, Iris Page says she’s gone from ‘crying all the time to laughing’[/caption]

Volunteers Ben and Jamie Clewer came in for particular praise from the people The Sun spoke to.

She said: “Ben’s been a lifeline. He calls to make sure I’m OK all the time. Anyone who gives up their time for others is doing a fantastic job.”

The former accounts clerk says walking in the park with Ben is the highlight of her week.

She said: “Helping each other out is the backbone of this country. I’ve supported PAFC since I was little and used to go with my dad, George. What they’re giving back to the community is fantastic.”

David Curnoe, 73, said: “Jamie rings for a chat every week and it’s always so nice to hear from him.

“The phone is a lifeline. I can call and catch up with people but the days can still be long. The Tackling Loneliness initiative has made such a difference to me this year. I’ll always be grateful.”

Iris Page, 77, has lived alone since husband Alan died in 2016. Their daughter Julie Anne, 58, is blind and disabled and lives in a home.

Iris said: “I can’t get to the weekly walk because I don’t drive so Jamie comes and takes me for a little walk every week.

“They’ve helped me get better and since they’ve been giving up their time, I’ve gone from crying all the time to laughing.”

David Boobier, 87, whose wife Maria died four years ago, has depended on Ben and Jamie for someone to talk to.

He said: “There’s an instant camaraderie because we all love football and support the same team. Giving up your time to help someone else is the most noble thing anyone can do.

“My life is much richer for Ben and Jamie. If only Argyle would start winning, everything would be great.”

Eight million adults are facing Christmas alone – with 83 per cent of them unlikely to speak to anyone at all face-to-face on Christmas Day.

Through our Christmas Together campaign, you — our brilliant readers — have been tackling the problem head-on by giving the gift of your company.

And off the back of your efforts, the Government has pitched in: today the Department for Digital, Culture, Media and Sport donated a record £7.5million to provide targeted relief to those most at risk of loneliness.

For those stuck at home without friends or family nearby, this Christmas might not be the most wonderful time.

But thanks to your generosity, it’s now looking that little bit brighter.

As leaders are getting ready for the launch of the COP26 summit later this week in Glasgow, the UN Environment Programme’s (UNEP)…

Nor’easters and hurricanes are strong low-pressure weather systems that leave substantial damage in their wakes.  While neither nor’easters nor hurricanes have many…

How China Lost Patience With Jack Ma, Its Loudest Billionaire

When will the tier system be reviewed and is there an announcement on December 23?

Nor’easters and hurricanes are strong low-pressure weather systems that leave substantial damage in their wakes.  While…