SLEEPY villages and towns near Covid hotspots could be lifted out of the toughest tiers to soften a mounting Tory backlash.

MPs are understood to have been told that rural towns and villages with low infection rates could be “decoupled” from cities in Tiers 2 and 3.

Officials are trying to win round rebels already threatening a mutiny when the tough measures are voted on next week, The Telegraph reports.

Five regions across the nation will jump from Tier 1 straight up to 3 after cases in some parts of their areas shot up.

But the scheme would mean MPs in some areas “unfairly” dragged into Tiers 2 and 3 will be offered the chance to breakaway if their infection rates are low.

It would come into effect when the tier review is carried out in mid-December with Matt Hancock among ministers who has discussed the idea with backbenchers.

Tory MPs in Kent are already said to be locked in discussions with the government over the plans after the whole county was plunged into the strictest Tier 3 restrictions.

Ashford in Kent was one of the areas that leapt from Tier 1 to Tier 3 on Thursday when the new system was announced.

Tunbridge Wells also fell victim to the new rules despite having only 140 cases in the last seven days.

Tom Tugendhat, the MP for Tonbridge and Malling, told the newspaper: “Many of us are talking to his [Mr Hancock’s] team at the moment – we are seeing where we are going to get.

“I’d like the Government to come to the right conclusion. It’s an error.”

Bath in North East Somerset has jumped from Tier 1 to Tier 2 thanks to its neighbour Bristol, where cases have risen.

MPs Liam Fox and Jon Penrose were furious over the move and begged ministers to move to a more regional system.

Ex-Cabinet minister Mr Fox said: “Why should we be punished for Bristol not being able to get its numbers under control? We weren’t the ones having raves and protests.”

Many MPs have pointed out Slough in Berkshire and Scarborough in North Yorkshire have already been removed from their regions and placed in different tiers.

The fresh tier rules will come into play from Wednesday as England’s lockdown lifts. 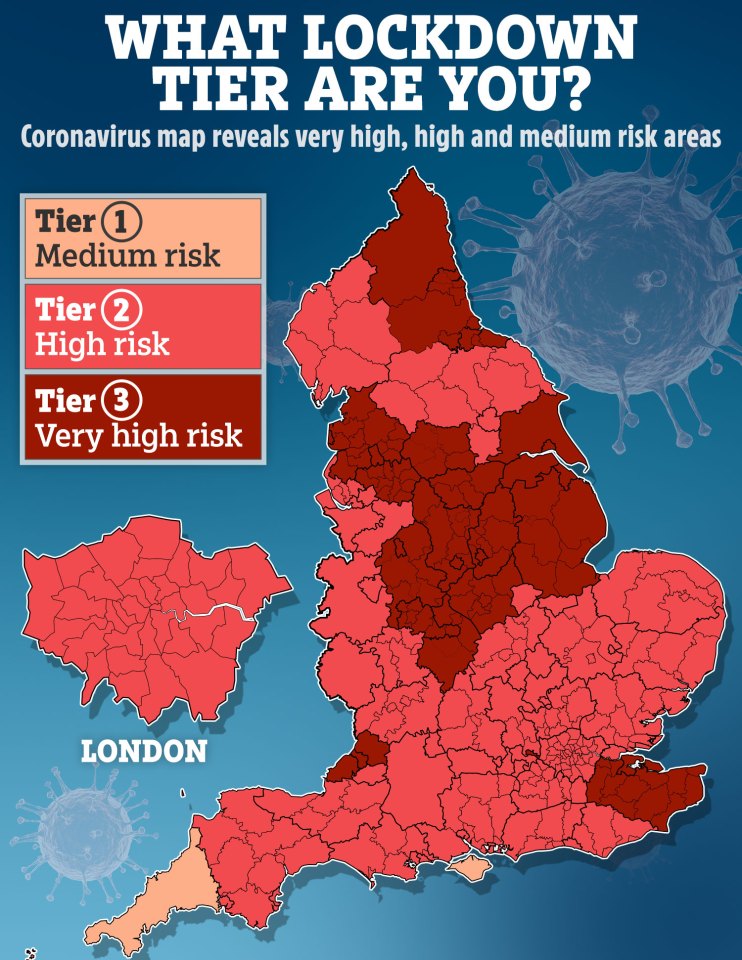 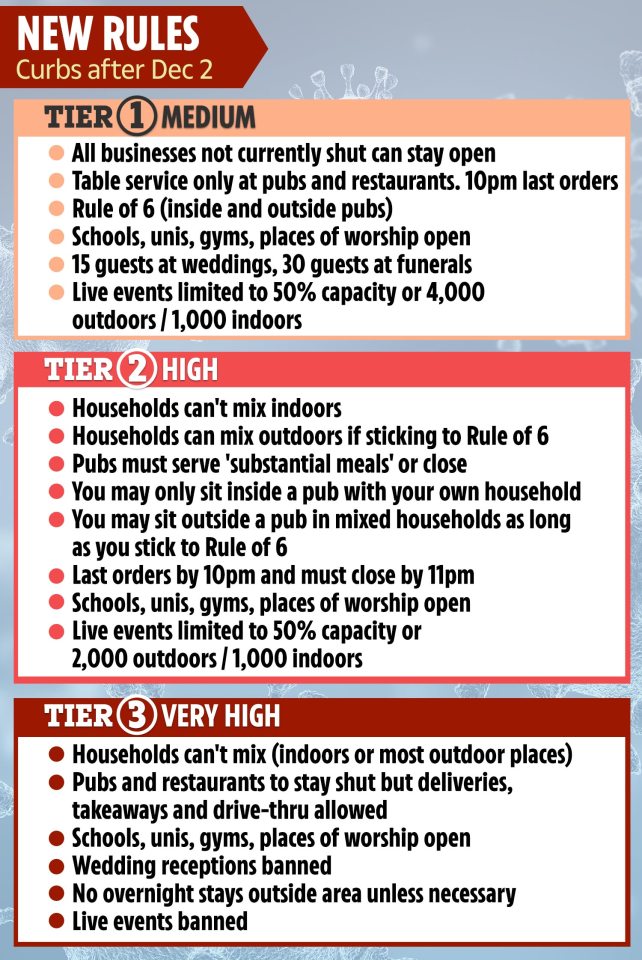 Indoor socialising and extra rules for pubs and restaurants will be slapped on 99 per cent of England under Tier 2 and 3 rules.

Just three areas will be under the lowest Tier 1 restrictions – Cornwall, the Isle of Wight and the Isles of Scilly.

Boris Johnson said yesterday he realised the rules are  “frustrating” – particularly for people in areas of low infection – but said they are necessary to control the disease.

He said: “The difficulty is that if you did it any other way, first of all you’d divide the country up into loads and loads of very complicated sub-divisions – there has got to be some simplicity and clarity in the way we do this.


Every hospital could be swamped if MPs don't back tough Tiers, Gove warns

Boris is now facing the biggest rebellion in his premiership next week with up to 70 MPs considering whether to oppose the new rule laws.

But they are unlikely to be able to vote it down as Labour will likely back it.

The strict rules are likely to remain in place until Easter Monday in a bid to protect the NHS, The Sun revealed today.

RUTH SUNDERLAND: With Morrisons set to fall into the hands of US buyout barons, a new book argues most private equity is…

A HOMECOMING event at Grambling State University ended with one dead and many injured after a shooting on Sunday. On the quad…

Dubois vs Joyce FREE: How to watch TONIGHT’S big heavyweight fight without paying a penny

RUTH SUNDERLAND: With Morrisons set to fall into the hands of US buyout barons, a new…

Pandora handing £500,000 pay rise to its UK staff as it fights to retain them in…