FORMER President Donald Trump raged that the US is becoming a “socialist nightmare” under Joe Biden and branded Liz Cheney a “warmonger” for attacking him over the election.

In a scathing statement released on Wednesday, Trump fumed that “Warmonger Liz Cheney” continues to “unknowingly and foolishly say there was no Election Fraud” in the 2020 vote.

In a scathing statement released on Wednesday, Trump fumed at Liz Cheney[/caption] 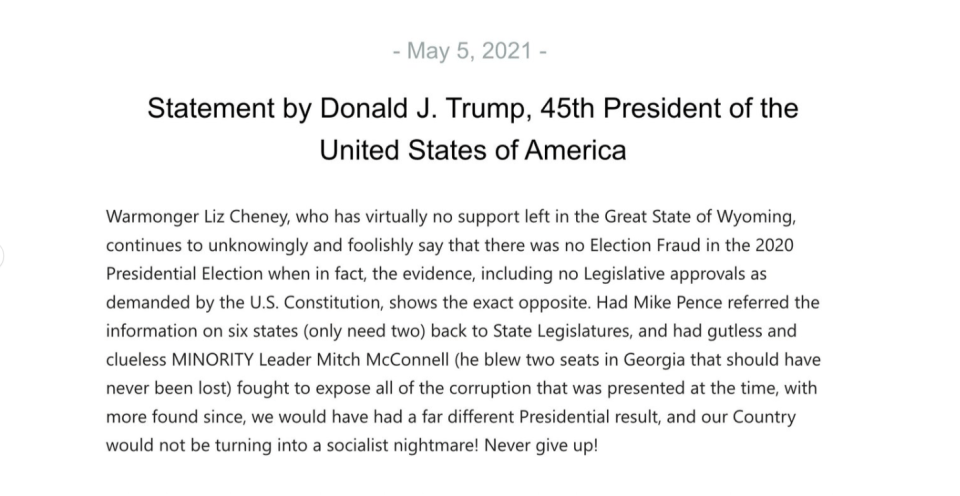 Trump continued that contrary to Cheney’s stance, whom he says “has virtually no support left in the Great State of Wyoming”, there is “evidence … including no Legislative approvals as demanded by the US Constitution, shows the exact opposite.”

“Had Mike Pence referred the information on six states (only need two) back to State Legislatures, and had gutless and clueless MINORITY Leader Mitch McConnell … fought to expose all of the corruption that was presented at the time, with more found since, we would have had a fair different Presidential result,” he wrote.

“And our Country would not be turning into a socialist nightmare! Never Give up!”

Trump offered no evidence to support his claims of election fraud – unfounded claims he has continued to peddle since losing the presidential race to Joe Biden in November.

In his rebuke of Mitch McConnell on Wednesday, Trump, ridiculed the former Senate Majority Leader for blowing “two seats in Georgia that should have never been lost.”

McConnell has frequently been in Trump’s cross-hairs since he departed the White House in January.

Last month Trump branded him a “dumb son of a b**ch” during a GOP event at his Mar-a-Lago club,

Most read in US News

For the latest news on this story keep checking back at Sun Online.

The Sun is your go to destination for the best celebrity news, football news, real-life stories, jaw-dropping pictures and must-see video.

CHELSEA’S Ross Barkley is on Burnley’s radar for an emergency swoop in January. The midfielder is only getting limited game time at…

Indian delegation to G7 summit in London 'goes into self-isolation'