HUMANITY may be just weeks away from finding out the truth about UFOs and potential aliens, a disclosure campaigner has claimed.

Steve Bassett, who has tirelessly worked to end the 74-year embargo of classified information on UFOs, told The Sun Online he believes intelligence agencies are preparing to lift the lid on extraterrestrial encounters.

The Senate Intelligence Committee has voted to require U.S. intelligence agencies and the Defense Department to compile a detailed public analysis of all data collected on ‘unidentified aerial phenomenon,’[/caption]

This includes crafts that have been buzzing US Navy ships[/caption]

The US Senate Intelligence Committee has asked the Director of National Intelligence to work with the Defense Department to provide a report by June 25 on unexplained sightings by the military.

The request came after revelations in 2017 that the Pentagon was researching a series of unexplained intrusions into military airspace, including mysterious objects captured on video stalking US Navy ships.

Since then defense officials have confirmed a number of UFO sightings – and even released stunning videos which show unexplained encounters in the sky, now often known as Unidentified Aerial Phenomena (UAP).

And the most recent was confirmed as genuine to The Sun Online last month – with a video and series of photos showing a mysterious phenomena encountering US warships and fighter planes.

Bassett, the executive director of Paradigm Research Group and a lobbyist on this issue, says he believes US intelligence is about to end what he called the 74 year truth embargo.

And he said such a release of information may be the “most profound” moment in the history of mankind.

He told The Sun Online: “What is going down right now is extraordinary. This is really a big deal. We may be in the last days of the truth embargo.

“We might be finally about to get the confirmation of the ET presence we have been waiting [almost] 75 years for.

“This would be the most profound event in human history.”

The term “disclosure” is often used to refer to the the total and final admission by the government that aliens are not only visiting Earth, but the government hides the truth from the public. 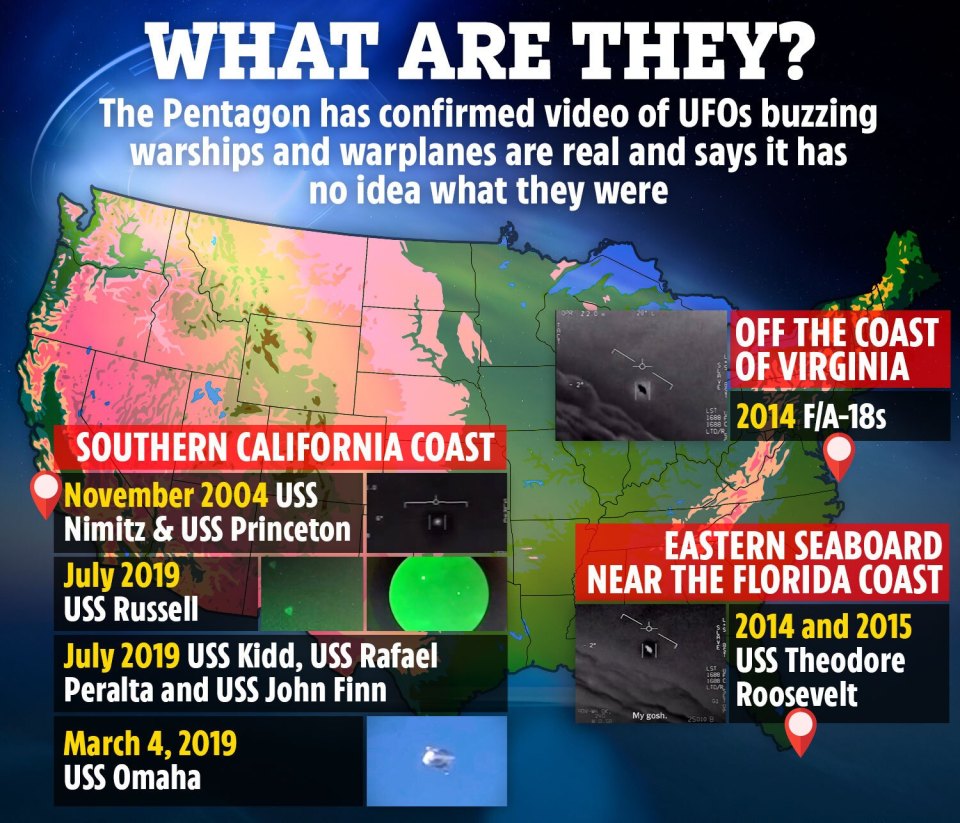 It is claimed this cover up started in 1947 when the Roswell Army Air Field (RAAF) distributed a press release claiming they had recovered the remains of a “flying disc” which had crashed in the desert.

Not surprisingly, the news made headlines across the US but the very next day the US Army suddenly backtracked and released a second statement claiming the recovered object was actually just a weather balloon.

Until recently, the US government denied any aliens were involved and rubbished many other UFO reports, and campaigners like Basset have been lobbying against the “truth embargo”.

But he said since 2015 there has been a group within the intelligence elite that wants to tell the truth.

During the 2016 US presidential election,, Democratic presidential hopeful Hillary Clinton was hailed as the “E.T. candidate”.

And that year she vowed to crack open government files on extraterrestrials, Area 51 and UFOs.

Donald Trump won and this was put on hold.

But despite this and the pandemic, Bassett said there was no going back and people were willing to testify before Congress in the summer. 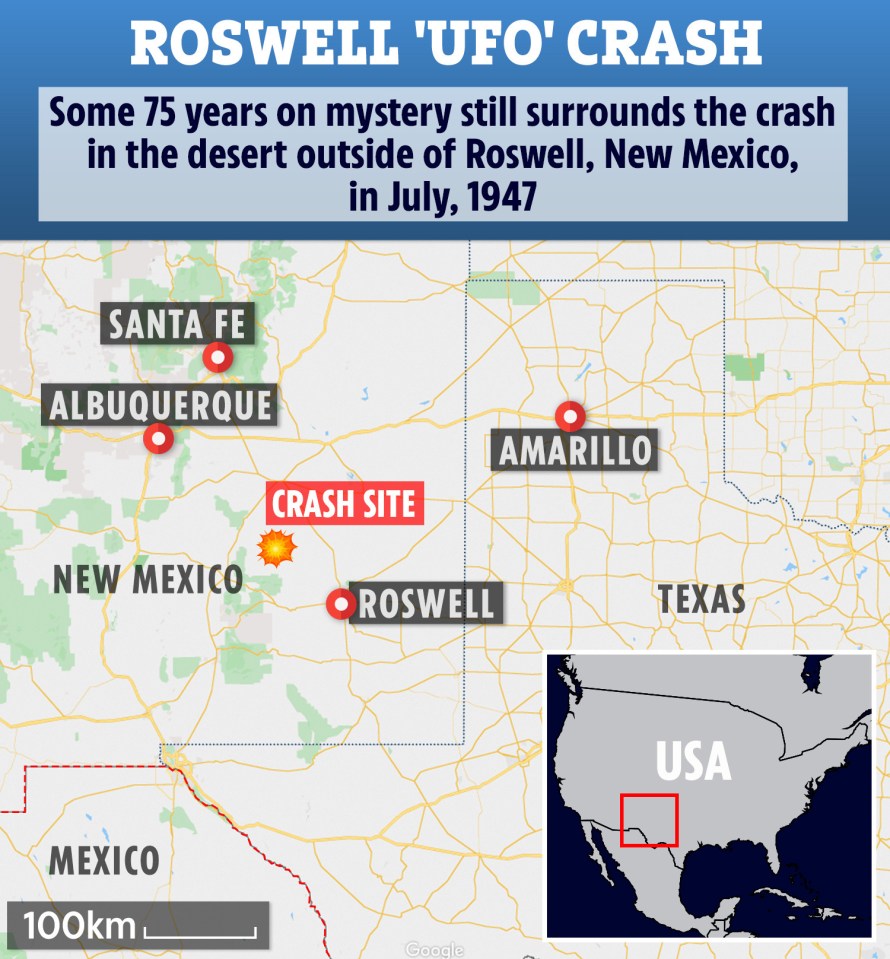 The Roswell Daily Record’s front page after the incident[/caption]

Mr Bassett told The Sun Online: “The timing of its ending is somewhat dependent on the vaccination schedule.

“The game plan all along was to get congressional hearings which we have been trying to get.

“Now we are going to get it. Why? Because of the standpoint to the military intelligence community and the politicians, there is only one way to disclosure was going to take place.”

This would see military personnel testifying to the phenomena over many days and a number of committees, he said, all watched by hundreds of millions of people.

He said: “It would give congressional members who are notorious for being a little too sensitive to their career prospects and how they raise money to hold those hearings.

“It would eliminate more risk which I don’t think is too great now.”

Lawmakers on the Intelligence Committee last year voted to set up the UAP Task Force – and in December gave them a 180-day deadline to produce a report on the strange phenomena caught on camera by US servicemen.

And with the US Navy releasing high profile clips such as the infamous “Tic Tac” video, defense officials have taken the astonishing step to confirm these strange encounters are occurring in the skies over the US.

Competing theories on the videos continue to rage – with some grounded on Earth claiming the videos capture never-before-seen military aircraft or drones, while others claim it shows otherworldly craft possibly piloted by aliens.

Others however are more skeptical and sometimes even dismissive, claiming the bizarre videos may just be camera tricks, natural phenomena or even outright hoaxes.


OAP, 73, who tried to run over neighbour in row accidentally hit his WIFE

KICK UP A STORM

Documentary filmmaker Jeremy Corbell released the latest round of footage which was filmed by US Navy pilots and personnel, with perhaps the most startling showing a “pyramid shaped” object flying over USS Russell.

The latest strange footage was leaked after it was submitted to the UAP Task Force.

Pentagon officials confirmed the footage was genuine – and Nick Pope, who investigated UFOs for the UK Ministry of Defence, told The Sun Online that the objects may be hypersonic drones – potentially from China or Russia.

But he believes even the US government may not know who is behind the mysterious phenomena.

Meanwhile, Luis Elizondo, who headed up the secretive Advanced Aerospace Threat Identification Program (AATIP) for the Pentagon, told The Sun Online that UAPs could represent an intel failure on the level of 9/11 by the US.

Earthshot Prize: Prince William delivers speech The prize is a “new global prize for the environment, designed to incentivise change and help…

MODELS hit the catwalk in wild outfits dressed as animals from a safari trip, as they took to the runway at the…

I ate at Salt Bae’s restaurant after lunch at McDonald’s and it’s not worth the money, says millionaire

A MILLIONAIRE who went from McDonald’s straight to Salt Bae’s London restaurant has said it was not worth the money. Tech contractor…

Electric cars will be cheaper to build than petrol by 2027

Mauro Icardi’s stunning wife Wanda shares bikini picture that Instagram deleted and fumes ‘are we in 2021 or 1810?’

Earthshot Prize: Prince William delivers speech The prize is a “new global prize for the environment,…

MODELS hit the catwalk in wild outfits dressed as animals from a safari trip, as they…

I ate at Salt Bae’s restaurant after lunch at McDonald’s and it’s not worth the money, says millionaire