UNITED Airlines has begun charter flights bringing the first batches of the Pfizer coronavirus vaccine into the US.

The flights with refrigerated cases of the vaccines come as the pharma giant works to ensure states have shots ready for mass distribute once given the green light from the FDA, the Wall Street Journal reported.

United was said to have begun the first flights with batches of the vaccine the same day that Covid cases in the US soared past 13million on Friday.

A source also told Reuters that flights were used to transport the first batch of vaccines – which Pfizer has said are 90 per cent effective – as the FDA prepares to meet on Tuesday to see who will receive the shots first.

Although the vaccines were reportedly transported into the US, they will not be given to Americans until if and when Pfizer is granted the emergency approval by the FDA.

United Airlines could not provide details specific to flights transporting the vaccines. 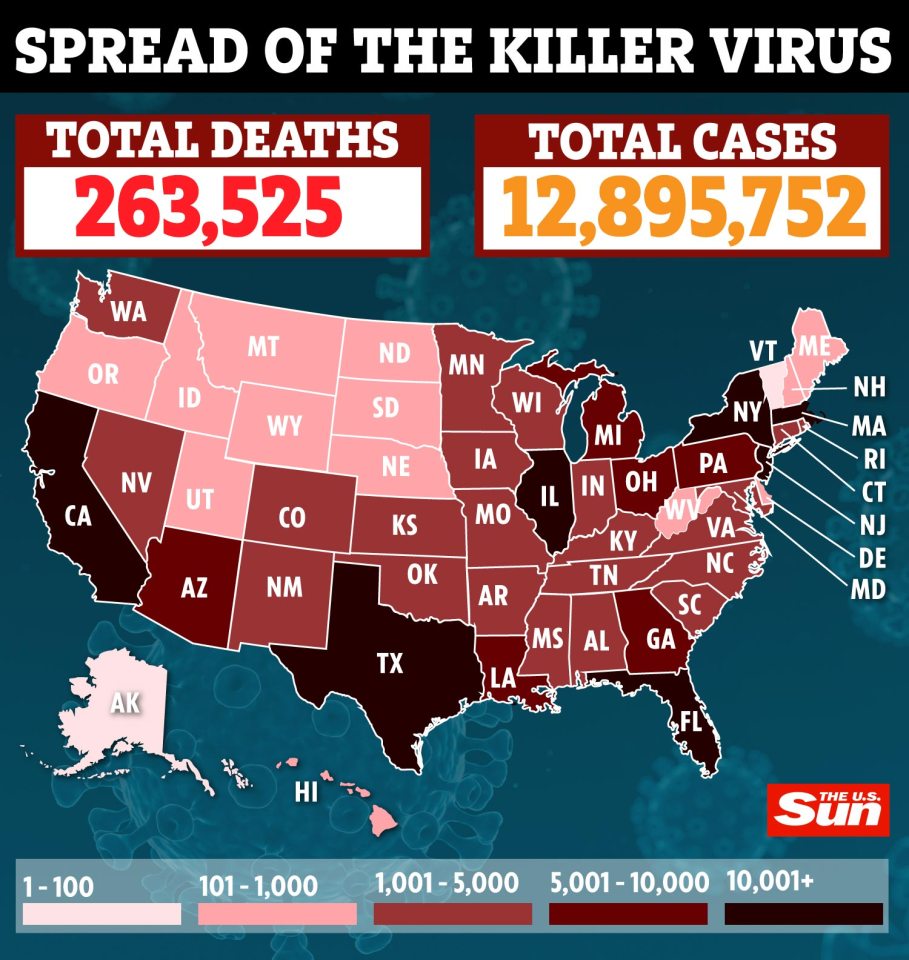 “United Cargo established a COVID Readiness Task Team earlier this summer to help ensure we have the right people, products, services, and partnerships in place to support a vaccine distribution effort on a global scale,” a spokesperson said in a statement to The Sun.

“We have made a commitment to our pharmaceutical and medical customers that we are ready to safely and effectively support their vaccines transportation needs.

“The safety and security of these commodities is our priority and we are proud to be a trusted partner in these efforts,” United added.

The full rollout of the vaccine is expected to begin by mid-December, a top coronavirus task force official said earlier this week.

In addition to the reported flights with the first batch of shots, United has also sought FAA approval to use more dry ice than is usually allowed on flights, the Journal reported.

Covid cases in the US on Friday surpassed 13million[/caption]

Staff at United Memorial Medical Center are seen in the ICU on November 26, 2020 in Houston, Texas[/caption]

This is part of an effort to ensure the vaccines can be kept at a low temperature to prevent them from going bad.

United is now allowed by the FDA to carry 15,000 pounds of dry ice on each flight, according to the Journal.

This is five times the normal amount allowed on a plane, the outlet reported.

The FAA on Friday said it is backing the “first mass air shipment of a vaccine,” the Journal reported.

As Pfizer reported the vaccine was shown to be 95percent effective in clinical trials, there’s hope that once it’s given the go-ahead, it could be sent out in mere hours.

The FDA’s scientific advisers are set to review Pfizer’s request on December 10, the Associated Press reported.

The group will then send a recommendation to the FDA.

Pfizer chief executive Albert Bourla said earlier this month that distribution could happen within just days of being given approval – but transport of the jab would begin in a matter of hours.

Dr Moncef Slaoui, head of Operation Warp Speed said earlier this week that a vaccine could be distributed as early as December 11 or 12.

“Our plan is to be able to ship vaccines to the immunization sites within 24 hours of approval,” Slaoui told CNN.

Slaoui’s comments came just days after Pfizer and its partner company BioNTech applied for emergency use authorization of the shot.

Reported transport of the vaccine comes as Covid cases continue to skyrocket in the US.

Josie Andrews is seen getting her nose swabbed as she gets a Covid-19 test on November 24, 2020[/caption]

Despite advisories from the CDC to stay home for Thanksgiving, TSA data showed over 4million Americans still traveled on the days surrounding the holiday, from sunday to Thursday, Reuters reported.

On Wednesday, the day before Thanksgiving, nearly 1.1million Americans traveled through airports.

This is the single largest travel day seen since the coronavirus pandemic began, according to the TSA.

MARTIN Luther King Jr.’s legacy is celebrated annually on the third Monday of January. This year, the holiday will be celebrated on…

LILLE defender Sven Botman is reportedly unlikely to join Liverpool this month. The Reds are interested in signing a centre-back after Virgil…

Prince Harry and Meghan Markle could doom the future of the Royal Family, according to royal biographer Duncan Larcombe. Speaking to True…

MARTIN Luther King Jr.’s legacy is celebrated annually on the third Monday of January. This year,…

LILLE defender Sven Botman is reportedly unlikely to join Liverpool this month. The Reds are interested…

Prince Harry and Meghan Markle could doom the future of the Royal Family, according to royal…

KANYE West’s brand Yeezy has “sued” a former intern for “$500k for sharing confidential photos.” The…