SO the lesson is – don’t take your sandwiches into the European Union.

A Polish lorry driver had his confiscated by Dutch border officials. 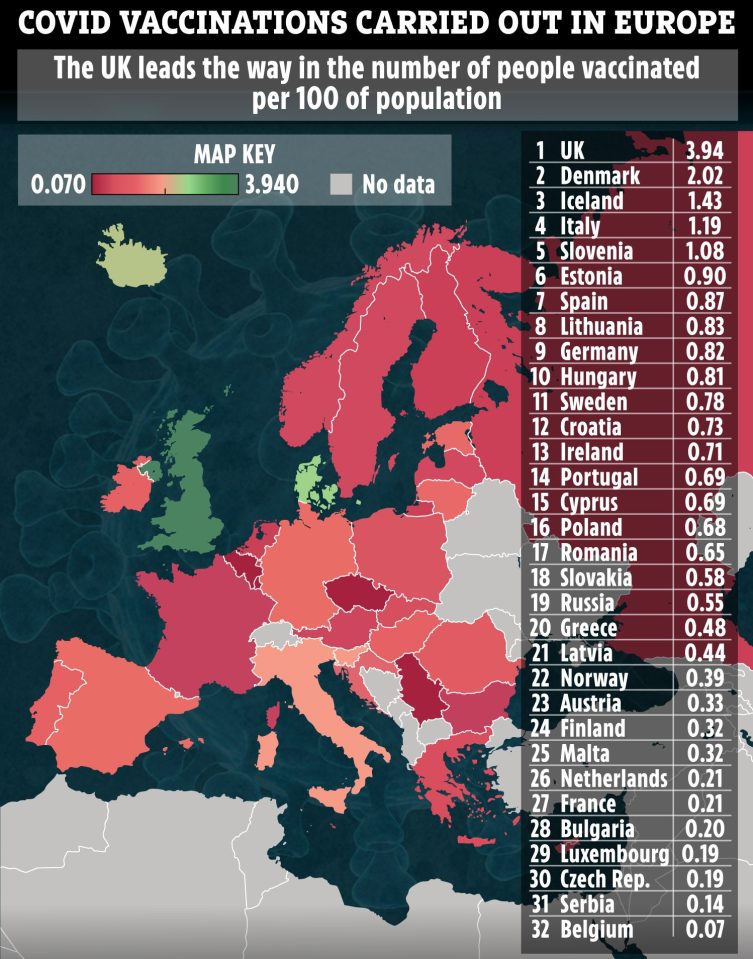 “British shandwiches! Not allowed,” screeched the Dutchman, before stamping up and down on the bread, spraying ham and mustard all over the place. Probably.

It looks like the EU nations are getting just a little bit arsey with all things British.

As well they might. Because the desire to leave the EU may turn out to be every bit as infectious as Covid. It may soon spread everywhere from Amsterdam to Alicante.

Look at what’s happened so far. We are not starving, as we were told we would be as soon as we left. Produce arrives pretty much the same as ever.

Trade deals are being struck right, left and centre. The forecasts for British economic growth are good.

Meanwhile, over the Channel, the bureaucracy of the EU and European Commission has left citizens furious – and in danger.

The rollout of the Covid vaccine in EU countries has not simply been slow, it’s been on a scale between glacial and non-existent.

And the reason? Bureaucracy and regulations. The very reason so many of us voted to leave.

The independent UK has vaccinated more than double the number of people Germany has. But even Germany’s vaccine programme is in crisis.

In parts of Northern Germany people wanting vaccines apply online and are told: “Thank you for your great interest! Please try again next Tuesday morning.”

We had vaccinated one million people before the French had managed to vaccinate 500. Some countries — Belgium, Luxembourg and the Netherlands, for example — have vaccinated only handfuls.

The total number of vaccinations in Germany, France, Italy and Spain — the four largest EU countries — amounts to just 12 per cent more than those carried out by tiny Israel.

The reason is bureaucracy. In the summer when our independent government was busy ordering as many vaccines as possible, the European Commission dithered.

It didn’t know what the hell to do. There was bickering.

Since then, the EU’s European Medical Agency has been painfully slow in approving vaccines for use.

The consequence is a grave shortage of vaccines on the continent.

That will lead to more deaths, as vulnerable people succumb to the virus.

Remainers argue that the vaccine rollout on the continent is down to member countries and not the fault of the EU.

Balderdash — another hilarious delusion. Each country needs to get the green light from the EU before it proceeds.

And you only get the green light when the medical agency and the commission are agreed.

I don’t think our government has handled this crisis terribly well. We were slow to lock down and slow to close our borders.

I am not convinced by the tier system and still less by the hokey cokey approach to lockdowns.

But there is no doubt that the ­Government acted quickly in securing vaccines: We are ahead of most of the world (Israel excepted) in that respect.

Being independent enabled us to take decisions quickly. We are now the envy of Europe.

So you can stamp on as many sandwiches as you like, Ruud.

The independence bug is catching on, and you won’t stop it.

He has around £180million invested in the digital currency, bitcoins.

Trouble is, he’s forgotten his password. He wrote it down but lost the piece of paper.

And he has two more guesses as to what the password is – or he loses all that money for ever.

He’s had eight attempts at trying to remember.

So I guess he’s already tried his birthday, his dog’s name, various swearwords and the name of the lass he fancied in school.

And I bet it’s the first thing he tried except with a rogue upper case letter in an unexpected place.

IF I had to make a list of the US Presidents I Think Are Really Bloody Marvellous, Donald Trump would not figure.

The end to his administration brought shame upon him and the Republican Party and the USA.

Donald Trump has now been banned from Twitter[/caption]

And restricted in what he can say on other social media platforms.

And the big tech companies have done this for no reason other than they disagree with him politically.

So they silence him.

These companies are all run by liberals.

And no people on Earth are more totalitarian than liberals.

They have too much power and are too partisan.

THE good news is the number of new Covid cases is ­levelling off.

The latest ­figures show a decrease in new infections from last week.

The bad news is the Government is set to introduce MORE restrictions.

These might involve a curb on takeaways and stopping people exercising with friends.

I don’t doubt the danger of Covid. But I do worry about the efficiency of lockdowns.

THE bloke who wrote loads of Dr Who episodes has said that only gay actors should play gay roles.

But did you take the same approach back when you were casting for Daleks?

Did you only give the parts to actors shaped like a pepperpot and with a big plunger sticking out of their stomachs?

Or what about the Cybermen? Rectangular metallic blokes with ray guns?

The point of acting is to pretend to be something you are not, be it The Prince of Denmark, a Dalek or a homosexual.

Get over yourself, Russell.

Lyle is so right on BLM

HERO of the week is Nottingham Forest’s footballer Lyle Taylor.

The talented forward is of mixed race.

But he refuses to take the knee before games, with the blessing of his black manager Chris Hughton.

Taylor says the knee-bending stuff is diluting the message to the point of meaninglessness.

He also says he wants nothing whatsoever to do with the organisation Black Lives Matter, because of its horrible aims and objectives.

He is shocked that the media and the football authorities have thrown their weight behind it.

A bright bloke. I hope other black and mixed-race players follow his lead.

FOOTBALLERS could be booked or sent off if they hug or snog one another after a goal has been scored.

This is the latest plan to get them to respect social distancing.

It’s fine by me. If we could also fine them for kissing the club badge, running with their hand cupped to their ear, or pointing to the back of their shirts – better still.

It won’t stop the spread of Covid but it will cheer me up.

Roll of honour at last

THIS lockdown is just as severe as the one we had last March.

But – wonder of wonders – there is still plenty of loo roll in the supermarkets.

Is that because we’ve learned, these last ten months, that there are more important things in the world than bog paper?

Have we fallen out of love with the Andrex puppy? By and large there’s a lot less panic-buying and hoarding going on.

I wonder – have we really learnt our lesson?

Covid end: Will we EVER be rid of coronavirus? Experts give devastating update

In recent months the Government has not ruled out bringing in stricter measures to control the spread of coronavirus in England. With…