LONDON and most of the south and east of England have been plunged into harsh Tier 4 measures just days before Christmas.

In a sombre press conference, Prime Minister Boris Johnson announced the changes on Saturday after he was spooked by a new coronavirus strain “spreading rapidly” in the south east of England.

The changes took effect from one minute past midnight on December 20.

Tier 4 measures were introduced in the following areas:

The PM had insisted just days before that Christmas will still go ahead for families – and it would be “inhuman” to cancel it.

MPs will be fuming as the moves will be done via emergency laws – and won’t be voted on in Parliament.

They broke up for the Christmas holidays on Thursday evening – and won’t go back until January unless there’s a Brexit deal to vote on.

The draconian moves come in response to a new covid strain, which was identified in the South East back in September, which is now spreading throughout Britain and becoming the dominant strain. 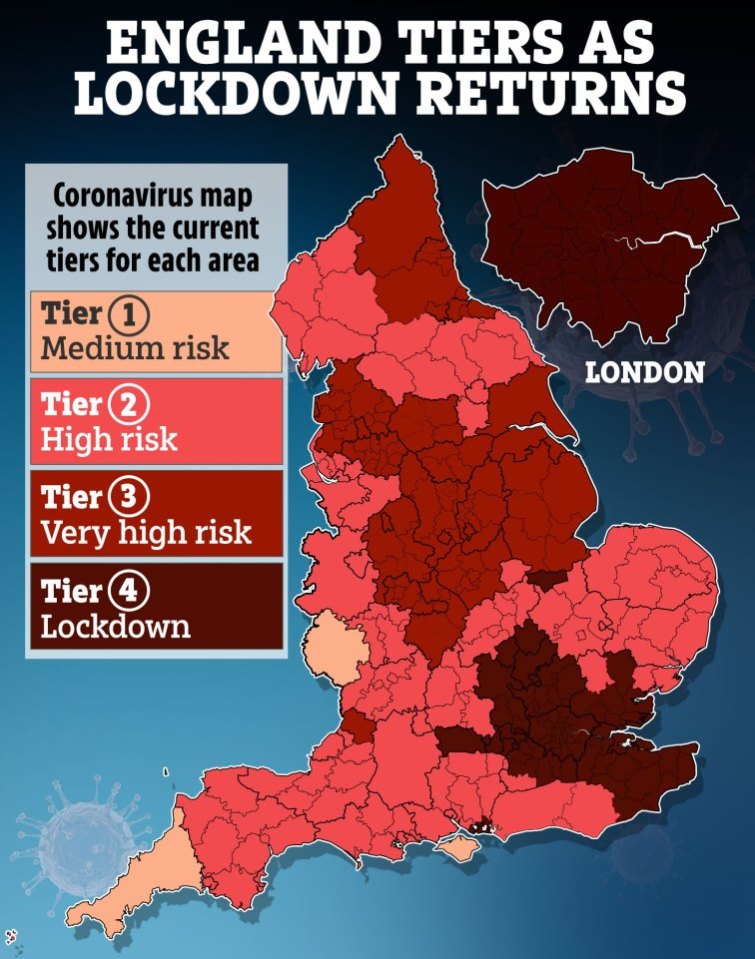 Boris said on Saturday the new mutant strain can spread up to 70 per cent more easily – which has spooked health bosses.

But it’s not likely to cause any worse illness, or deaths, he said, and should still be affected by the vaccine.

Patrick Vallance said: “It’s a horrible moment for sure”.

And Professor Chris Whitty begged people not to flee the capital, saying: “If you have packed a bag, unpack it.”

But he stressed a message of hope for the future as it was revealed that 350,000 people across the UK have been vaccinated now.

Boris added: “There is now hope – real hope – that we will soon be rid of this virus. That prospect is growing with every day that passes and every vaccine dose administered.

“As sure as night follows day, we will beat back this virus. We will defeat it. And we will reclaim our lives.”

Changes up and down the country had already seen 4.5million more people — 38million in all — wake up to Tier 3 restrictions on Saturday.

Wales and Northern Ireland have already announced a post-festive shutdown. But Boris had previously said he was “hoping very much that we’ll be able to avoid anything like that”.

But speaking on a tour of a telecoms training hub in Bolton, Boris admitted: “The reality is that infection rates have increased very much in the last few weeks.”

He urged the public to avoid spreading the deadly bug over Christmas and reiterated the three household bubble was a limit, not a target people should aim for.

Praising Brits, the PM said: “I think people really get this. All the evidence I’m seeing, people understand this is the time to look after our elderly relatives and avoid spreading the disease.

“Keep it short, keep it small, have yourselves a very little Christmas as I said the other night — that is, I’m afraid, the way through this year.

“Next year I’ve no doubt that as we roll out the vaccine it will be very different indeed.”

Stats released on Saturday showed those living with Covid in England have risen by almost a fifth in a week.

Earlier in the week, Matt Hancock warned there was a “very serious problem” in Kent as he urged people to take caution.

He told MPs: “I would say to everybody right across Kent that we really need to act with serious responsibility right across Kent, no matter which part of Kent you’re in, we have a very serious problem in Kent.

“The only way that we can get it under control is for people in Kent to essentially behave as if they have the virus and are trying not to pass it on to somebody else.

“Be really cautious in Kent, it is the area of the country which has the biggest problem both in terms of case rates and in terms of, therefore, the huge pressures on the NHS in Kent.”

London, and parts of Essex and Hertfordshire moved into the top tier on Wednesday after a “sharp rise in cases” and the detection of a new strain of Covid that is believed to be spreading faster than the original.

Non-essential shops and gyms in Tier 4 areas closed from midnight on Sunday.

Those in Tier 4 will be able to meet only one other person outdoors – but must not stay overnight from home.

The “stay at home” message is expected to be law – but police are not expected to fine people or stop cars travelling.

International travel abroad is not advised – but won’t be banned.

People should not enter or leave Tier 4.

People can only meet one person from another household in an outside space.

The new rules will be in place for at least a fortnight until 30 December – after Christmas.

Support bubbles will be still allowed while communal worship can continue.

Weddings will be banned except for extreme cases – like those who are terminally ill.

Tier 3 includes areas of “very high” risk, where coronavirus transmission rates are of the greatest concern.

In these areas households are not allowed to mix either indoors or outdoors in private gardens.

Pubs and bars have closed in the very high alert level areas – except for takeaway.

People have also been advised against travel in and out of the areas.

But they will get access to new rapid-result tests for everyone which gives tests in under an hour, a strategy which has seen Liverpool’s cases drop drastically.

They hope that means they can easily escape the tougher rules and move down a tier.

Areas in Tier Two – where there is a high risk of coronavirus – are banned from mixing with other households indoors, including in pubs.

When outside, the rule of six applies.

Current social distancing measures, and the “rule of six” outdoors in public and private spaces will continue in this tier.

Pubs must serve a meal with drinks and last orders will be at 10pm with a closing time of 11pm.

Areas in Tier 1 — where there is medium risk of the virus — will be subject to current social distancing measures, the “rule of six” and pubs can stay open until 11pm.


Even TOUGHER covid restrictions may be needed to stop mutant strain, govt warns

Weddings and funerals can go ahead with restrictions on the number of attendees. 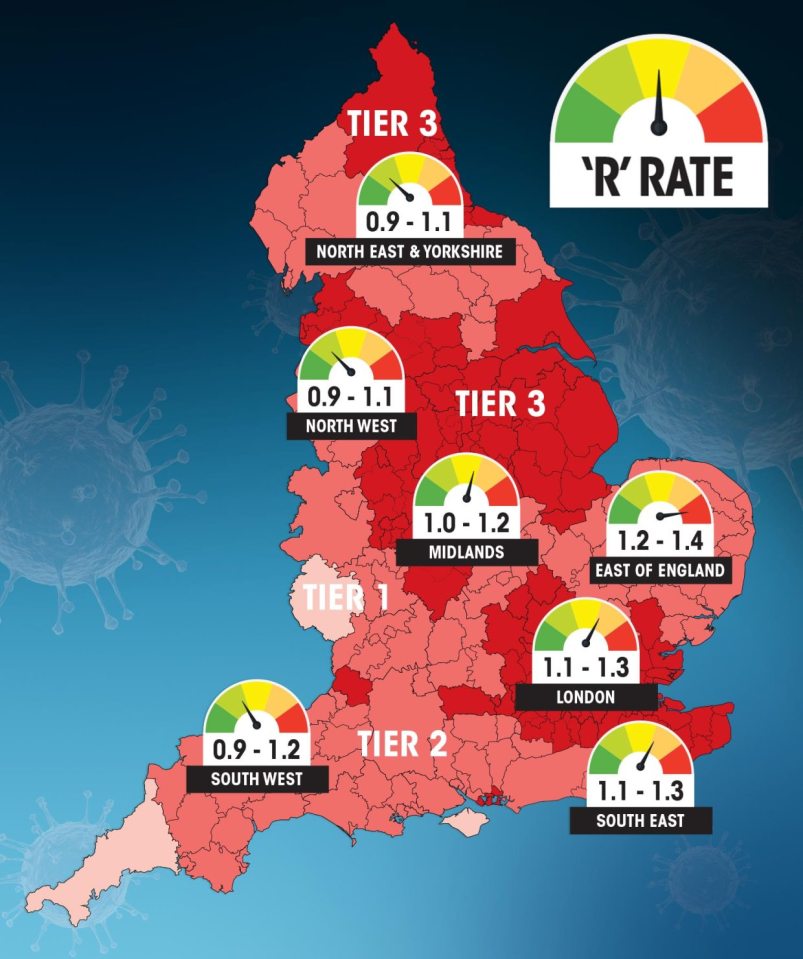 Zhao Lijian said: “If the US continues to play the Taiwan card, it will surely bring game-changing and huge risks to China-US…

TOTTENHAM reached the quarter-finals of the Carabao Cup thanks to a 1-0 win over Burnley at Turf Moor. Lucas Moura scored the…

TOTTENHAM reached the quarter-finals of the Carabao Cup thanks to a 1-0 win over Burnley at Turf Moor. Lucas Moura scored the…

Zhao Lijian said: “If the US continues to play the Taiwan card, it will surely bring…

Evidence of this theory was highlighted six years ago in the journal Palaeogeography, Palaeoclimatology, Palaeoecology. At…

LUCAS MOURA fired Tottenham into the Carabao Cup quarters at the expense of Burnley. The Brazilian…