IF you thought 2020 had thrown all it could at us, think again: The world will end TODAY, just days before Christmas, according to conspiracy nuts.

Bonkers theories predicting our impending doom have been fuelled by the Mayan calendar and a rare celestial event due tonight.

Why do people think the world will end on December 21?

He cited the Mayan calendar and the alignment of two planets on that date – which happens to be his birthday – as evidence for his baseless claims.

The orbits of Jupiter and Saturn will take them so close together on December 21 they’ll form a “double planet” phenomenon in the sky.

It will mark the first “conjunction” of the two planets, forming what some are calling a “Christmas star”, for several centuries.

According to Pastor Begley, the Mayan calendar has been resurrected once again and points to this date as one of apocalyptic significance.

After claims the world would end on December 21 2012 – when the Mayan calendar ran out – came to nothing, conspiracy nuts now say the date was miscalculated.

Instead, the Mayans apparently believed our world would be snuffed out eight years later, on December 21, 2020.

Coincidentally, the date is also the beginning of the winter solstice, rounding off a triple whammy of supposedly prophetic events.

“It will be the closest Jupiter and Saturn have been since 1623 and it won’t even come that close again for another 500 years,” Pastor Begley said in a YouTube video in June.

“So this is so rare and it’s going to be on the winter solstice.

“The Mayans are now reorganising and saying this could certainly be the end of the world as we know it.”

It’s not clear precisely what the Indiana internet star, who’s famed for his wild end of the world predictions, thinks will happen on this date.

The mysterious events will apparently lead to the promised return of Jesus Christ.

It goes without saying that Pastor Begley’s claims are pure speculation and are not backed by any hard evidence.

The evangelist has made plenty of doomsday predictions in the past, all of which, thankfully, have come to nothing.

What is the Mayan calendar?

The Mayan calendar is a system of calendars and almanacs which was used by several cultures in Central America.

It dates back to the 5th century BCE and it is still in use in some Mayan communities today.

The Mayan Calendar has three separate corresponding calendars: The Long Count, the Tzolkin (divine calendar), and the Haab (civil calendar).

Each calendar is cyclical, meaning that a certain number of days must occur before a new cycle can begin.

The calendars are also used simultaneously.

The Tzolkin and the Haab identify the days and every 52 years they connect and create a calendar round.

The Long Count date comes first, then the Tzolkin date, and last the Haab date.

The Mayans believed that the universe was destroyed and then recreated at the start of each universal cycle.

What was the Mayan prediction for the end of the world?

The Mayans predicted that the world would come to an end on December 21, 2012.

Nasa debunked the rumors that the world would end in 2012 – the prediction of the Mayan calendar.

“For any claims of disaster or dramatic changes in 2012, where is the science? Where is the evidence?” the space agency said.

“There is none, and for all the fictional assertions, whether they are made in books, movies, documentaries or over the Internet, we cannot change that simple fact.

“There is no credible evidence for any of the assertions made in support of unusual events taking place in December 2012.”

Scientist and Fullbright Scholar Paolo Tagaloguin fed into Pastor Begley’s conspiracy theory on Twitter, posting “following the Julian Calendar, we are technically in 2012.”

“The number of days lost in a year due to the shift into the Gregorian Calendar is 11 days.

By Tagaloguin’s calculations, Earth would be destroyed on June 21, 2020.

To no one’s surprise, the world did not end on June 21.

However, there are other dissenting opinions on the final date of the Earth.

“Of course, the Mayan elders said this could have been the end of the world today.

“December 21, 2020, during the great conjunction when Jupiter and Saturn come within 0.1 degrees of one another and create the brightest star in the skies since the star of Bethlehem.

“It will be the closest Jupiter and Saturn have been since 1623 and it won’t even come that closes again for another 500 years.

“So this is so rare and it’s going to be on the winter solstice,” said the Pastor. 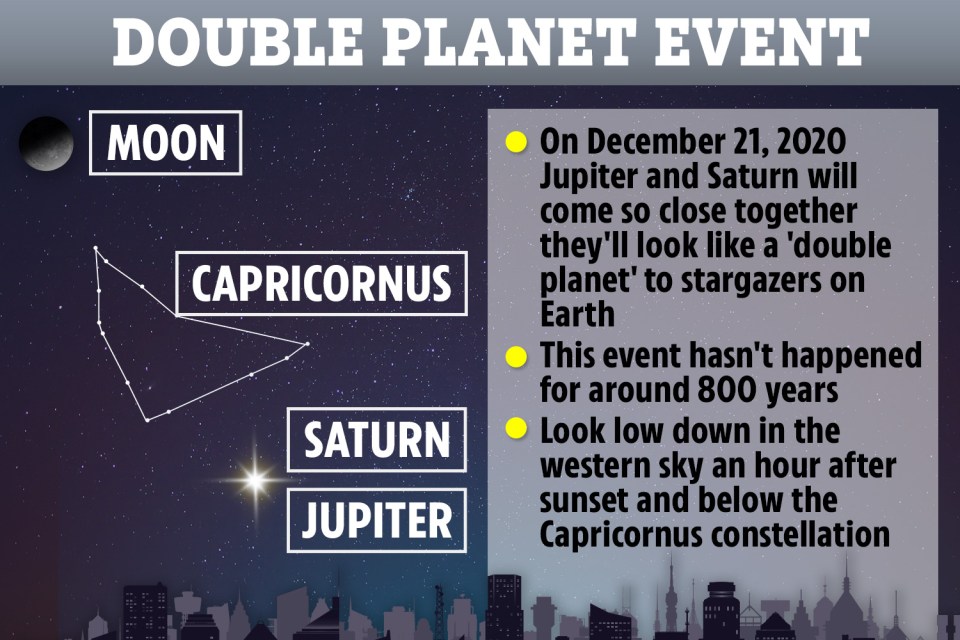 Jupiter and Saturn will come so close together next week they’ll form a rare “double planet” phenomenon for the first time in 800 years.

Some people are referring to the event as the forming of a “Christmas Star” or “Star of Bethlehem”, while others are linking it to the apocalypse.

The last time stargazers could observe this event was back in the Middle Ages on March 4, 1226.

The two planets did also come close together in the 1600s but this wasn’t said to be visible from Earth.

Before 2020 ends, a great conjunction of Jupiter and Saturn

They're visible tonight and every night – near each other for the rest of 2020 – an appealing and mind-expanding sight! Read more: https://t.co/DmHiB64L2U

The celestial event is called the Great Conjunction and will be taking place on December 21, just in time for Christmas.

Jupiter and Saturn will come just 0.06º away from each other.

That’s about 1/5 of the diameter of a full Moon.

To the naked eye this will look like one big bright star.

If we’re lucky enough not to have cloudy skies on December 21, the celestial event should be visible all over the world.

'STAR IN THE EAST'


What time is the winter solstice Great Conjunction on December 21?


Jupiter and Saturn conjunction TONIGHT: How to see the Christmas star?

CAN YOU DIG IT?

In other news, Twitter has banned conspiracy theorist David Icke from its platform for good.

A hidden military base from the 1860s was recently found buried beneath Alcatraz prison.

And, a skywatcher has caught a rare glimpse of a secretive space plane owned by the US Air Force.

What do you think Area 51 is used for? Let us know in the comments!

STRICTLY Come Dancing dropout Robert Webb has kicked out at the show as brutal and weird. The comedy favourite said he got…

Aquaman is back. Jason Momoa unveiled a behind-the-scenes look at Aquaman and the Lost Kingdom, the first major DC Extended Universe superhero…

I only have sex with my fiance, 24, once a year on December 25 – it’s his Christmas present & we got pregnant last year

STRICTLY Come Dancing dropout Robert Webb has kicked out at the show as brutal and weird.…

Aquaman is back. Jason Momoa unveiled a behind-the-scenes look at Aquaman and the Lost Kingdom, the…

Lotto winning numbers tonight – are YOU a winner of £3.8 million jackpot?

Robert Durst, 78, ‘gets Covid and is put on ventilator’ just two days after being jailed for life over murder of friend

ROBERT Durst has been put on a ventilator after he tested positive for Covid-19, his attorney…